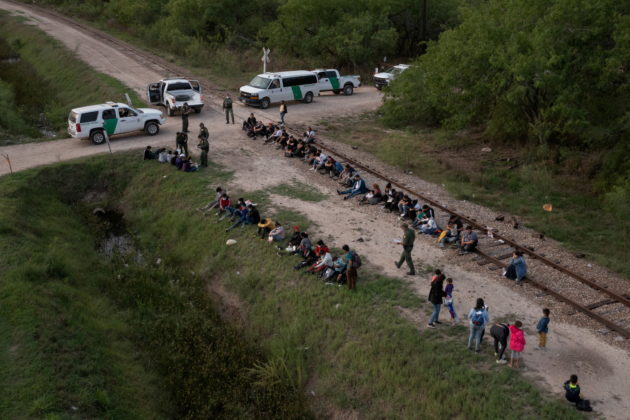 FILE PHOTO: Dozens of asylum-seeking migrants from Romania, Armenia, and Central America, including a group of unaccompanied minors, await to be transported to a U.S. border patrol processing facility after crossing the Rio Grande river into the United States from Mexico on a raft in La Joya, Texas, U.S., May 5, 2021. Picture taken with a drone. REUTERS/Adrees Latif/File Photo

Interviews with a dozen current and former agents highlight growing dissatisfaction among some rank and file members of the agency over Biden’s swift reversal of some of former President Donald Trump’s hardline immigration policies. Since Biden took office, border apprehensions have risen sharply.

Some of that frustration is coalescing into opposition to Biden’s pick to lead the border patrol’s parent agency, U.S. Customs and Border Protection (CBP). The nominee is Tucson Police Chief Chris Magnus, who still needs to be confirmed by the U.S. Senate.

The discontent was partly reflected in an unusual memo from the acting Border Patrol chief last month, who objected to a new directive to stop using the term ‘alien’ when referring to migrants, saying it would hurt agents’ morale.

The interviews provide an anecdotal snapshot of the mood within border patrol and, as such, do not represent the views of all agents. One agent who spoke to Reuters on the condition of anonymity said “there are always going to be changes” between presidential administrations and that agents are “used to it.”

But any internal strife could complicate plans Magnus may have to implement and reshape border and asylum policy. Criticism from even a small number of agents could also bolster Republican efforts to use concerns over illegal immigration to rally supporters ahead of the 2022 congressional elections.

Brandon Judd, president of the National Border Patrol Council, the labor union that represents three-quarters of the roughly 20,000 border patrol agents, sharply criticized Biden in a news conference with Republican senators on Capitol Hill on Wednesday. The union endorsed Trump in the 2020 election and still supports his restrictionist policies.

“I can confidently say that President Biden owns this crisis,” Judd said, referring to the recent spike in border crossers. “It is his fault.”

The 97-year-old border patrol agency has been whipsawed by policy changes under Republican and Democratic administrations that have required them to frequently modify their approach to migrants they encounter at the border.

But a number of the agents interviewed said they had never experienced such a dramatic pendulum swing.

Discontent in the ranks has already led some agents to consider early retirement, six of them said. Voluntary retirements within border patrol are set to outpace last year if they continue at the current rate, according to agency data.

Rosemarie Pepperdine, a border patrol agent working in Casa Grande, Arizona, is one of those who said she was considering taking early retirement.

“We have so many people coming across, and then we’re out there killing ourselves to catch them, rescue them or whatever it is, and then they’re being released,” she said. “Why even bother?”

Asked about the agents’ frustration, a Biden administration official said the president’s approach was rooted in solutions and effective management.

The opposition to Magnus from within the agency derives in part from an incident in 2017, when a Honduran migrant escaped from a Tucson hospital while a border agent was looking at his phone.

Magnus’ police department dispatched search teams and helicopters, police records show. After they determined the migrant had likely left the area, they called off the manhunt, according to Tucson’s assistant police chief, Kevin Hall.

The border patrol wanted to use a police station to set up a command post to aid the search. But that was rejected by police, who according to Hall felt that was unnecessary because the border patrol had their own facilities. He said police also wanted to avoid attracting pro-immigrant protesters who were congregating at the hospital.

Border patrol union officials were outraged, writing on Facebook at the time that Magnus’ police department “put politics over rule of law and oath of office.”

Magnus “refused to work with the agency that he’s going to be overseeing,” Judd, the union president, said in an interview with Reuters. “That alone, in my opinion, should be disqualification.”

Hall said he felt the police department had done everything they could to find the man. “We were all a bit surprised,” Hall said of the union’s outrage about the 2017 incident, “because the facts as we saw them were not exactly aligning with the facts as they saw them.”

The son of an immigrant father from Norway, Magnus, 60, has not publicly spoken about what his plan would be for CBP.

His backers in police and policy circles say he is a strong supporter of his employees and is open to a wide range of views.

Claudia Jasso, chief development officer at the Tucson-based nonprofit Amistades, said one of the first things Magnus did as head of the city’s police department was to meet with the Latino community to listen to their concerns. “He was humble and asked a lot of questions,” she said.

Gil Kerlikowske, who was CBP commissioner for three years under former President Barack Obama, said there are people within the agency who disagree with the politically outspoken union but who may not speak out.

If Magnus is confirmed to head CBP, Kerlikowske said, “empathy and compassion will be a standard.”

Many immigration advocates have been deeply critical of border patrol and say it is time for reform.

In 2019, the agency came under fire when the nonprofit news site ProPublica revealed a private Facebook group in which border patrol agents aired racist and misogynistic views. Then-acting CBP Commissioner Kevin McAleenan said at the time that the posts did not reflect the views of the agency’s employees.

Border apprehensions have been rising since Biden took office in January, reaching about 173,000 in April – the highest monthly level in more than 20 years.

The Biden administration initially struggled to process the border crossers fast enough, resulting in thousands of children being stuck in overcrowded border stations and forcing some agents to take on caretaker roles instead of patrolling for drugs and smugglers.

While the administration made changes that helped empty out the crowded stations, agents said they and their colleagues remain frustrated that many families are being released into the United States to pursue asylum cases, even as a Trump-era policy of quick expulsions at the border during the pandemic is still in place.

In at least one part of the southern border, some agents have started calling Biden ‘Let ‘Em Go Joe,’ according to a border patrol agent who asked to remain anonymous because he was not authorized to speak to the media.

Gil Maza, a former agent who retired in March, runs a website selling an unofficial coin that refashions the U.S. Border Patrol logo to read ‘U.S. Welcome Patrol.’ Maza said he had sold 78 of the coins in four days to current and former agents.

“It sheds a little humor on the situation,” he said of the coins. “And it’s something that helps us, I guess, mentally and emotionally cope with the situation because especially right now, the situation is pretty dire out there.”

Some agents echoed a grievance aired by Border Patrol Chief Rodney Scott in an April 16 memo seen by Reuters that criticized the Biden administration’s directive to use the terms ‘undocumented non-citizen’ or ‘migrant’ and stop using the phrase ‘illegal alien.’

“Over the years many outside forces on both extremes of the political spectrum have intentionally, or unintentionally, politicized our agency and our mission,” Scott wrote in the memo to acting CBP Commissioner Troy Miller.

The memo was first leaked to the right-wing news site Breitbart.

The Biden administration official defended the new terminology, saying that choice of words mattered and that those in custody deserved to be treated with dignity.