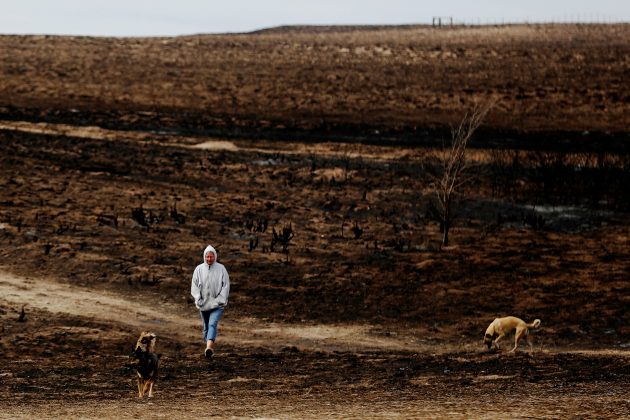 LIPSCOMB, Texas (Reuters) – When the Schwerzenbach family saw a wildfire racing toward their remote ranch in Lipscomb, Texas, there was no time to run.

“We had a minute or two and then it was over us,” said 56-year-old Nancy Schwerzenbach.

The fire, moving up to 70 miles per hour (112 kph), was one of several across more than 2 million acres (810,000 hectares) that hit the Texas Panhandle, Oklahoma and Kansas last week, causing millions of dollars of damage and killing thousands of livestock.

Burning through nearly all 1,000 acres of the Schwerzenbach ranch, the fire killed some 40 cattle. A mile away, a young man in the rural community was killed.

“The fire was about two miles away before we knew what happened to us,” she said.

Numerous smaller fires burned in Colorado, Nebraska and the Florida Everglades, according to the National Oceanic and Atmospheric Administration.

In Kansas, Oklahoma and Texas ranchers are returning home to survey the damage from the fires, fueled by tinder-dry vegetation and high winds. Local farmers from the Great Plains have helped those who have been affected by the wildfires by donating hay and fencing material.

In Oklahoma, the fires scorched a Smithfield Foods Inc. hog farm in Laverne, killing some 4,300 sows.

“When we drive down the road and look out on the pasture lands, there’s no grass. There’s dead deer, dead cows, dead wildlife, miles of fence gone away. It looks like a complete desert,” said Ashland Veterinary Center co-owner Dr. Randall Spare, who is helping in relief efforts in Clark County, Kansas.

“They’re digging large pits and burying the animals in there,” he said.

In Texas, state government agencies estimate about 1,500 cattle were lost, according to Steve Amosson, an economist at Texas A&M AgriLife Extension.

“When we value the deaths of cattle at market value, including disposal costs, we’re talking about $2.1 million at this point, and I expect that to go up,” he said. “We’re still dealing with chaos, they’re still trying to find cattle.”

Amosson estimates it could cost $6 million to recover 480,000 acres burned in Texas fires along with $4.3 million to replace and repair fences in the northern Texas Panhandle either destroyed by the fire or by cattle trampling them to escape the blaze.

Texas is the top U.S. cattle producing state with some 12.3 million head and Kansas is third at 6.4 million.

For Troy Bryant, 34, a rancher in Laverne, Oklahoma, the impact from the fires has been devastating. He lost livestock

“We saw 4,000 acres burned here. Some places further west of here lost much more,” he said.

Click on http://reut.rs/2lXlAZK to see a photo related essay