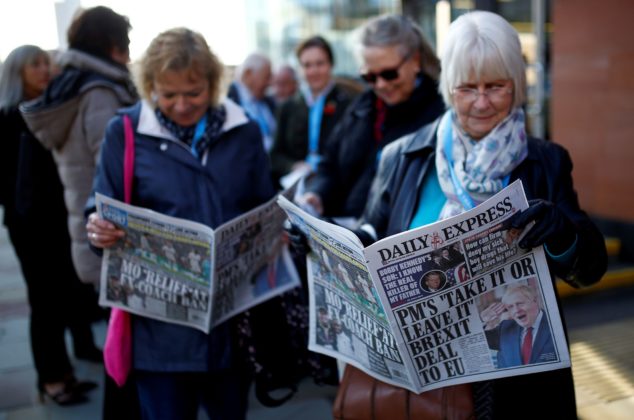 MANCHESTER, England (Reuters) – Prime Minister Boris Johnson made a final Brexit offer to the European Union on Wednesday and said that unless the bloc compromised, Britain would leave without a deal at the end of this month.

In what supporters cast as a moment of truth after more than three years of crisis, Johnson stuck to his hard line on Brexit, giving some of the first, albeit vague, details of what he described as “constructive and reasonable proposals”.

With the Oct. 31 Brexit deadline moving closer, Johnson’s aides cast the proposals to be delivered to Brussels as London’s final gambit to try to break the deadlock – principally over arrangements for the Irish border – and find a path to a smooth departure from the EU.

“We are coming out of the EU on October 31, come what may,” Johnson told party members, after expressing “love” for Europe in a speech that focused mostly on domestic issues such as health, the economy and crime.

“We are tabling what I believe are constructive and reasonable proposals which provide a compromise for both sides,” Johnson said. “Let us be in no doubt that the alternative is no deal.”

Many diplomats fear the United Kingdom is heading towards a no-deal or another delay as they say the British proposals are not enough to get an agreement by Oct. 31. Johnson said further delay was “pointless and expensive”.

The initial reaction from other European capitals was cool. Berlin and Paris said they were awaiting details.

EU diplomats and officials in Brussels were less polite with one calling the reported proposals “fundamentally flawed”.

“If it’s take it or leave it, we better close the book and start talking about the modalities of an extension,” a senior EU official told Reuters.

“Essentially it is a non-runner,” said another EU diplomat.

Quitting the EU is Britain’s most significant geopolitical move since World War Two. It is, though, still uncertain if it will leave with a deal or without one – or even not leave at all.

Deutsche Bank said it saw a 50 percent chance of a no-deal Brexit by the end of the year. This would spook financial markets, send shockwaves through the global economy and divide the West. It could also bring chaos to British ports and disrupt supply lines in goods from food products to car parts.

Despite Johnson’s repeated promises to deliver Brexit on Oct. 31, parliament has passed a law stating that Britain must request a delay if it does not have a deal by Oct. 19. Johnson has repeatedly refused to say how he will get around the law.

A senior British official said: “The government is either going to be negotiating a new deal or working on no deal – nobody will work on delay.”

Ireland, whose 500 km (300 mile) land border with the United Kingdom, will become the frontier of the EU’s single market and customs union, is crucial to any Brexit solution.

The problem is how to prevent Northern Ireland becoming a back door into the EU market without erecting border controls that could undermine the 1998 Good Friday Agreement that ended decades of sectarian violence in Northern Ireland in which more than 3,600 people were killed.

The Withdrawal Agreement that former Prime Minister Theresa May struck last November with the EU says the United Kingdom will remain in a customs union “unless and until” alternative arrangements are found to avoid a hard border.

Johnson said Britain had compromised in putting forward a proposal to try to change that so-called backstop, an insurance policy to ensure there is no return to a hard border.

Giving little detail on his proposals, Johnson said there would be no checks at or near the Irish border. He said London would respect the 1998 peace agreement. He did not explain how.

Britain would “protect the existing regulatory arrangements for farmers and other businesses on both sides of the border” while Northern Ireland would leave the bloc alongside the rest of the United Kingdom, he said.

“By a process of renewable democratic consent by the executive and assembly of Northern Ireland,” Johnson said. “We will go further and protect the existing regulatory arrangements for farmers and other businesses on both sides of the border.”

He said the United Kingdom “whole and entire” would withdraw from the EU, with London keeping control of its own trade policy from the start. Technology could offer a solution, he said, without giving details.

“I hope very much that our friends understand that and compromise in their turn,” said Johnson, who took office in July after May stood down.

With the EU already pouring cold water on some of the reports of his proposal, the likelihood of a no deal appears to be rising – something Johnson’s opponents say they believe is the prime minister’s overriding goal.

John McDonnell, finance policy chief for the opposition Labour Party, described Johnson’s proposals as “a cynical attempt to force through a no-deal Brexit”.

Johnson has repeatedly said he wants a deal.