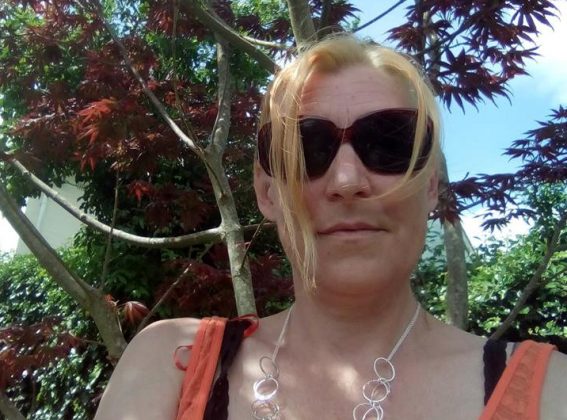 Dawn Sturgess, who has died as a result of Novichok poisoning, is pictured in Salisbury, Britain June 27, 2016, in this picture obtained from social media. Facebook/Dawn Sturgess via REUTERS

By Paul Sandle and William Schomberg

LONDON (Reuters) – A woman who died after being poisoned with a nerve agent that also struck a former Russian spy in March must have handled a contaminated item, and tracking it down is key to police investigations, Britain’s top counter-terrorism officer said. 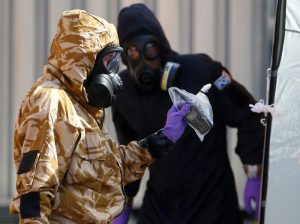 FILE PHOTO: Forensic investigators, wearing protective suits, emerge from the rear of John Baker House, after it was confirmed that two people had been poisoned with the nerve-agent Novichok, in Amesbury, Britain, July 6, 2018. REUTERS/Henry Nicholls/File Photo

Dawn Sturgess, 44, died on Sunday just over a week after she was exposed to Novichok in southwestern England, a few miles from where Russian double agent Sergei Skripal and his daughter Yulia were attacked with the same poison.

The death of Sturgess, a mother of three, was being treated as a murder, police said.

“This latest horrendous turn of events has only served to strengthen the resolve of our investigation team as we work to identify those responsible for this outrageous, reckless and barbaric act,” counter-terrorism police chief Neil Basu said.

Basu told reporters the priority was to determine how Sturgess and her partner, 45-year-old Charlie Rowley who is critically ill, came across an item contaminated with Novichok, developed by the Soviet military during the Cold War.

Britain and its allies blamed Russia for the attack in March on the Skripals, prompting the biggest Western expulsion of Russian diplomats since the Cold War. Moscow has rejected the accusations and has hit back by expelling Western diplomats.

British Prime Minister Theresa May said she was appalled and shocked by Sturgess’s death and the interior minister, Sajid Javid, said the “desperately sad news only strengthens our resolve to find out exactly what has happened”.

Javid, who is chairing a meeting of the government’s emergency committee on Monday, has said there were no plans at this stage for further sanctions against Russia.

The Skripals fell ill after the poison was applied to the ex-spy’s front door in the city of Salisbury. Sturgess and Rowley were found at a house in Amesbury, 11 kilometers (7 miles) away. 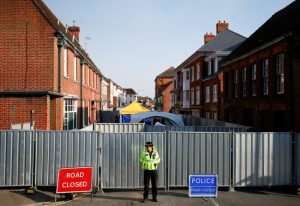 FILE PHOTO: A police officer stands in front of screening erected behind John Baker House, after it was confirmed that two people had been poisoned with the nerve-agent Novichok, in Amesbury, Britain, July 5, 2018. REUTERS/Henry Nicholls/File Photo

Basu said the severe reaction of Sturgess and Rowley meant they must have received a high dose of Novichok.

“Our hypothesis is that they must have handled a container we are now seeking,” he said. “Our focus and priority at this time is to identify and locate any container that we believe may be the source of the contamination.”

The poisoning of the Skripals was the first known offensive use of such a chemical weapon in Europe since World War Two.

Russia has denied any involvement in the Skripal case and suggested the British security services carried out the attack to stoke anti-Moscow hysteria, an assertion London calls absurd.

Sturgess and Rowley fell ill on June 30. Medical workers initially suspected a drug overdose but tests by the Porton Down military research center showed they had been exposed to Novichok.

Britain has notified the global chemical weapons watchdog, the Organisation for the Prohibition of Chemical Weapons (OPCW).

Yulia Skripal, Sergei’s daughter, was in a coma for 20 days after she was attacked and was eventually discharged about five weeks after the poisoning. Her father was discharged on May 18.

“The staff here at Salisbury District Hospital worked tirelessly to save Dawn. They did everything they could,” Christine Blanshard, medical director at the hospital said.

Britain’s public health authority acknowledged on Friday the concerns of people living in the area after the two incidents involving Novichok, but said it was confident that the risk to the public remained low.