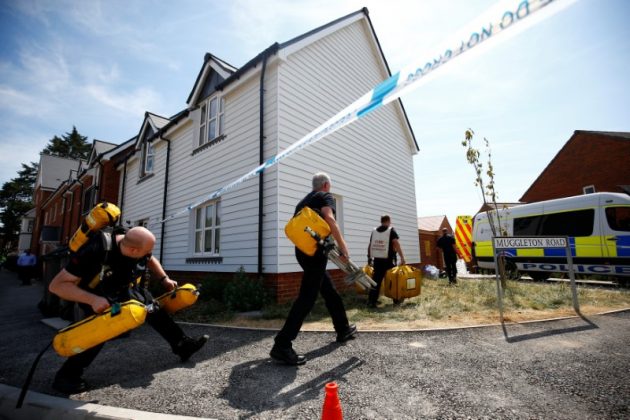 Fire and Rescue Service personel arrive with safety equipment at the site of a housing estate on Muggleton Road, after it was confirmed that two people had been poisoned with the nerve-agent Novichok, in Amesbury, Britain, July 6, 2018. REUTERS/Henry Nicholls

SALISBURY, England (Reuters) – Police wearing protective suits entered a hostel in the southern English city of Salisbury on Friday as counter-terrorism detectives stepped up their investigation into how two people were exposed to the nerve agent Novichok.

A team of 100 officers are working to discover how and where a 44-year-old woman and a 45-year-old man, both now critically ill, came across an item contaminated with Novichok, the same toxin used in an attack on ex-Russian spy Sergei Skripal and his daughter four months ago.

Britain has accused Russia of poisoning the Skripals with the nerve agent – developed by the Soviet military during the Cold War – at the former spy’s home in Salisbury in what was the first known offensive use of such a chemical weapon on European soil since World War Two.

The Kremlin has denied any involvement and says Britain is trying to stoke up anti-Russian sentiment. 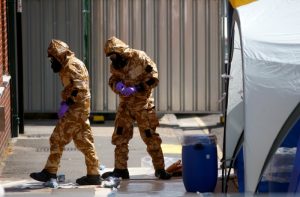 Forensic investigators wearing protective suits enter the rear of John Baker House, after it was confirmed that two people had been poisoned with the nerve-agent Novichok, in Amesbury, Britain, July 6, 2018. REUTERS/Henry Nicholls

Paramedics were called on Saturday morning to a house in Amesbury, a few miles from Salisbury, after the woman, named by media as Dawn Sturgess, collapsed. They returned later in the day when the man, Charlie Rowley, also fell ill.

Tests later showed they had been exposed to the same nerve agent as the Skripals, although the authorities said it was not yet clear whether it was from the same batch.

Police said they had fallen ill after handling a contaminated item but gave no further details. On Friday, four investigators wearing protective clothing entered the hostel for homeless people in Salisbury where media said Sturgess had been staying.

“Meticulous and systematic searches are under way at a number of sites. The safety of the public and our officers remains paramount and the searches will take longer because of the precautions that we must take to ensure there is no outstanding risk,” police said on Thursday.

Skripal – a former colonel in Russian military intelligence who betrayed dozens of agents to Britain’s MI6 foreign spy service – and his daughter Yulia were found slumped unconscious on a park bench. They spent weeks in hospital before being discharged.

The British authorities say there was nothing in the background of the latest pair to suggest a link to espionage or to Russia.

The March attack prompted the biggest Western expulsion of Russian diplomats since the Cold War as allies sided with Britain’s view that Moscow was either responsible or had lost control of the nerve agent.

Moscow hit back by expelling Western diplomats, questioning how Britain could know that Russia was responsible and offering rival interpretations, including that it amounted to a plot by British secret services.