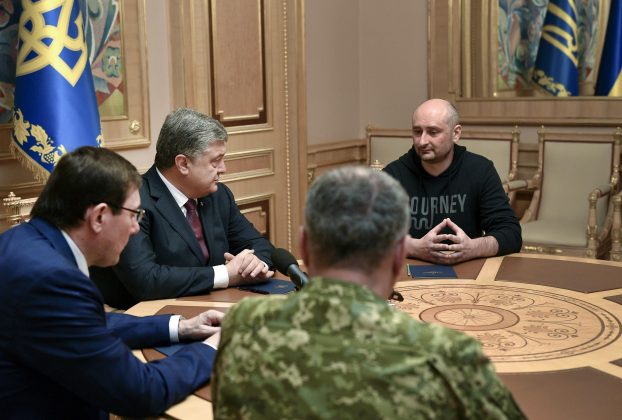 KIEV (Reuters) – Ukraine on Thursday defended the action of its state security services in faking the death of a Russian dissident journalist after international criticism, saying the bizarre ruse had been essential for protecting him.

Ukraine revealed on Wednesday that it had stage-managed the fake murder of Arkady Babchenko, a critic of the Kremlin who they said had been targeted by hit-men hired by Russia, in order to trace a trail back to Russia and expose plans for his, and other, state-sponsored assassinations.

But some criticized the incident, which involved the phoney distribution of lurid details about his shooting and photographs showing him apparently lying in a pool of blood, as a stunt in poor taste which had sparked a false outpouring of grief and finger-pointing at Russia.

Some said the operation had hurt Kiev’s credibility and played to Russian prejudices about Ukraine.

“Relieved that Arkadiy #Babchenko is alive!” the office of the OSCE’s Harlem Desir tweeted. “I deplore the decision to spread false information on the life of a journalist. It is the duty of the state to provide correct information to the public.”

Swedish Foreign Minister Margot Wallstrom who had expressed horror at Babchenko’s earlier reported murder, tweeted: “I am of course relieved that Arkady Babchenko is alive and well. Others are better placed to comment on the operation conducted by the Ukrainian Security Service.”

Michael Carpenter, the former U.S. Deputy Assistant Secretary of Defense, wrote on Twitter that “the cost in terms of the credibility of gov institutions is huge. Russia will exploit the hell out of this.”

However, he later added: “If the operation helped expose the chain of Russian intelligence operatives involved in this plot, it was well worth it.”

President Petro Poroshenko was among those who defended the ruse. In a video showing him greeting Babchenko, he said: “I am absolutely convinced there was no other way. You’re a great guy.”

Interior Minister Arsen Avakov, in a sharp reaction, said he was surprised and shocked by “pseudo-moral” criticism from abroad and he defended a successful operation to save Babchenko’s life.

“If it had been possible to do such operations on other occasions we would do it. We saved a life, broke a potential network … that’s enough for us to be satisfied,” he told journalists.

Ukraine’s embassy in London, in a comment, asked for understanding from its international partners even when it took “unorthodox approaches” to fend off Russia’s hybrid attempts at destabilization.

Babchenko himself, who was greeted with a hug by Poroshenko on Wednesday night, thanked the security service for saving his life and was robust in defending their actions.

“The English press says operation has done more harm than good?” he said on Facebook. “You want good? Give me a UK passport and protection. And then you can lecture me how to save my family.”

Anton Gerashchenko, a prominent lawmaker and adviser to the interior minister, who provided details of Babchenko’s “murder” on Tuesday night said he had been shot in the back by a man hiding in a stairwell, after returning home in Kiev from buying bread. His wife, it was said, found him in a pool of blood.

Gerashchenko reappeared on Wednesday explaining that a cloak-and-dagger operation had been necessary to trace the trail from the would-be assassin to his handlers.

They had to believe the plan to kill Babchenko had succeeded “and force them to take a number of actions that will be documented by the investigation,” he wrote on Facebook.

Very few people knew about the plan, in order to prevent any information leaking, he said. A picture of Babchenko lying in a pool of blood was released, police made a series of statements about their investigation and issued a sketch of the killer.

The head of the Ukrainian state security service (SBU), Vasyl Hrytsak, said on Wednesday that it had received information about a plot to kill Babchenko.

The SBU’s covert operation allowed it “to gather irrefutable evidence of the terrorist activities of Russian special services on the territory of Ukraine.” The security service detained a Ukrainian citizen who it said was recruited by Russia to find someone to kill Babchenko.

He also made clear that Babchenko’s wife had prior knowledge about the operation. “His family knew what measures we were taking, Arkady was warned in advance. He was under our control. The family also knew about everything.”

After Babchenko’s reported murder, the Ukrainian Prime Minister condemned the Russian state and a string of friendly countries produced statements in sympathy. Foreign Minister Pavlo Klimkin, who said he was not kept in the loop, spoke about the murder at the United Nations in New York.

Desir, the office of the Organization for Security and Co-operation in Europe’s representative on media freedom, flew to Kiev to meet Babchenko’s colleagues in a show of solidarity.

Babchenko on Wednesday recounted how the SBU had approached him a month ago to say someone had been paid $40,000 to carry out a hit job on him. They showed him documents that the would-be killers had, including his photo and passport details.

The Russians pressed the would-be assassin to carry out the order quickly but the Ukrainians managed to get the operation delayed with a series of obstacles, such as pretending that Babchenko had broken his leg or had on a trip abroad, he said.

They managed to delay the Russian attempt on Babchenko until after the Champions League soccer final, which Kiev hosted last weekend, the authorities said.