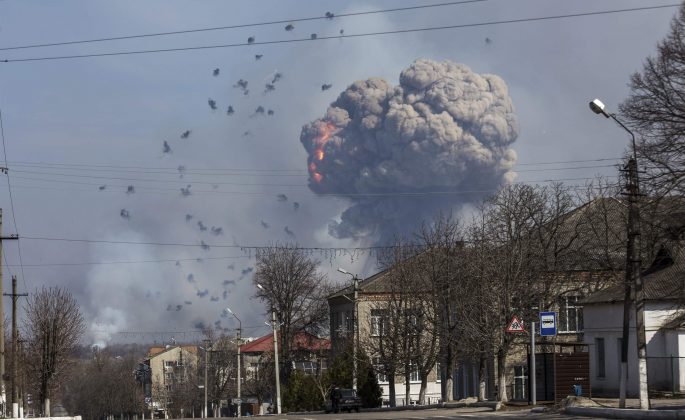 Flames shoot into the sky from a warehouse storing tank ammunition at a military base in the town of Balaklia (Balakleya), Kharkiv region, Ukraine, March 23, 2017. REUTERS/Alexander Sadovoy

KIEV (Reuters) – Ukraine suspects the Russian military or its separatist rebel proxies were responsible for blowing up a warehouse storing tank ammunition at an eastern military base early on Thursday morning, Defence Minister Stepan Poltorak said.

Fire and explosions caused the detonation of ammunition in several sites at the base, possibly set off by a drone attack or a radio or timed device, Poltorak told a press conference.

Nobody was hurt but around 20,000 people have been evacuated from the surrounding area in the eastern Kharkiv region. Firefighters have struggled to douse the flames and explosions at the site continue, sending clouds of thick grey smoke into the sky.

“We have a ‘friendly’ country – the Russian Federation,” Poltorak said. “I think that first of all it could be representatives who help the (separatist) groups that carry out combat missions,” he said.

Ukraine did not provide evidence of Russian or rebel involvement. The Russian military did not immediately respond to a request for comment.

The base, which held about 138,000 tonnes of ammunition, is located in the city of Balaklia, about 100 km (60 miles) from the frontline of Ukraine’s war against Russian-backed separatists.

The warehouse was guarded by around 1,000 people, some of whom heard the sound of an aircraft just before the explosions.

Military spokesman Oleksander Motuzyanyk said security around other bases was being beefed up. Ukrainian Prime Minister Volodymyr Groysman was due to fly to the area.

A third of the base is still burning and the airspace above it was closed off, Poltorak said, adding that the attack would not significantly affect Ukraine’s military capacity.

Saboteurs previously tried to destroy the same base using drones in 2015, another military spokesman, Yuzef Venskovich, told the 112 TV channel.

More than 10,000 people have been killed in the conflict between Ukraine and the separatist rebels since 2014, and a ceasefire agreed in Minsk in 2015 is routinely violated.