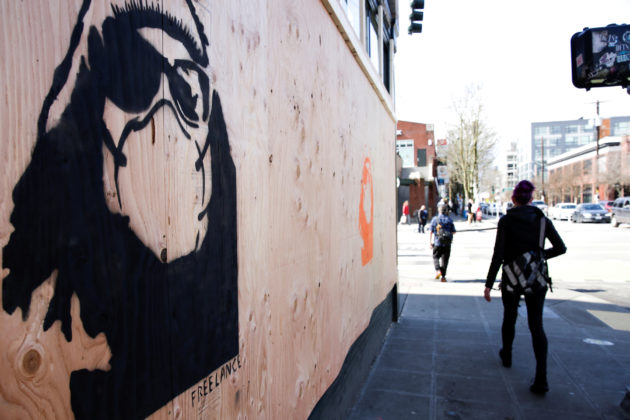 FILE PHOTO: The image of a person wearing a respiratory protective device is pictured on a boarded-up business in Seattle's Capitol Hill neighborhood as efforts continue to help slow the spread of coronavirus disease (COVID-19) in Seattle, Washington, U.S. March 29, 2020. REUTERS/Jason Redmond/File Photo

WASHINGTON (Reuters) – The U.S. government is pressuring large lenders to go live this week with another round of a key federal pandemic loan program despite many unresolved issues, sparking an industry scramble to get lending platforms ready, five people familiar with the discussions said.

But with dozens of changes to the rules and government technology system, the latest round is much more complex. Some industry executives worry that the government pressure to launch with so many unresolved issues could cause a rerun of the paperwork and technology snags that dogged last year’s launch.

While the program helped millions of small businesses, last year’s problems contributed toward some needy borrowers missing out while some ineligible companies and fraudsters got funds, oversight watchdogs have said.

A spokesman for the Small Business Administration (SBA), which jointly administers the PPP with the Treasury Department, said Congress expected the latest round to be launched swiftly to get cash to needy businesses as quickly as possible.

“SBA, in consultation with Treasury, is working around the clock to fulfill this congressional desire … and urges lending partners of all sizes to continue assisting eligible small businesses,” he added in an emailed statement.

As of Friday, the industry was circulating an eight-page document, seen by Reuters, of questions on the rules, required documentation and technology processes.

“Everyone is trying to move really quickly … but it’s just really difficult to launch a $300 billion program in a few weeks. People are struggling,” said Dan O’Malley, chief executive of Numerated, which provides PPP loan processing software to banks.

“The SBA and Treasury are pushing because of the economic need. They’re just trying to do the right thing,” he added.

Last week, officials contacted large lenders to ensure they would start accepting applications on Tuesday, said one of the five people, who spoke on condition of anonymity. Another person with knowledge of the discussions said officials are also anxious to get as much cash out the door as possible before Democratic President-elect Joe Biden takes over on Wednesday.

Under the program, lenders make loans to be repaid by the government provided borrowers spend the cash on eligible costs.

Last year, lenders issued 5.1 million loans worth $525 billion. As the pandemic drags into a second year, Congress granted $284 billion more in funds and changed the rules on eligible borrowers and expenditures.

Richard Hunt, chief executive of the Consumer Bankers Association, said the industry had “dedicated thousands of bank employees to make the process as efficient as possible.”

In addition to changes to the rules for first-time PPP loans, borrowers will be allowed a second loan provided they can show a 25% hit to their revenues. To fix technology capacity issues seen last year, the SBA has introduced a new loan application technology platform for lenders.

Combined, lenders say these amount to substantial changes. As of Friday, outstanding questions ranged from how to calculate employee numbers, which revenue documents were needed and how closely lenders must review them, to how borrower affiliates should be treated and requirements for loans to be forgiven, according to the document and sources.

The second source with knowledge of the discussions said more time to iron out the wrinkles could help mitigate “bad behavior.” But the first industry source said with so much confusion over who was eligible for second-time loans, he was more worried the SBA would reject applications.

Still, some small lenders which went live last week noted they’d had longer to prepare than last year and that their experience had so far been positive. A different industry source said big banks had tested their systems over the weekend and were “cautiously optimistic” Tuesday would go smoothly.