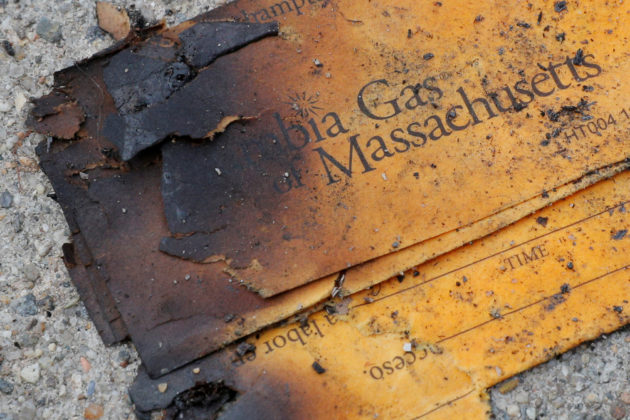 FILE PHOTO: FILE PHOTO: A burnt Columbia Gas of Massachusetts envelope sits on the sidewalk outside a home burned during a series of gas explosions in Lawrence, Massachusetts, U.S., September 14, 2018. REUTERS/Brian Snyder/File Photo

BOSTON (Reuters) – A utility operator blamed for catastrophic gas explosions in Massachusetts in 2018 will pay a $53 million fine and plead guilty to violating a federal pipeline safety law as part of a deal in which its parent NiSource Inc has agreed to sell the company and exit the state.

Federal prosecutors in Boston on Wednesday said Columbia Gas of Massachusetts will plead guilty to violating the Pipeline Safety Act to resolve a probe into to the disaster, which killed one person, injured 22 others and destroyed multiple buildings.

NiSource, as part of a deferred prosecution deal, also agreed to sell Columbia and exit Massachusetts, a condition U.S. Attorney Andrew Lelling said was meant to “vindicate” the outrage of residents of Lawrence, North Andover and Andover, where the blasts occurred.

“Clearly what happened here is this particular company couldn’t be bothered to maintain the safety of its customers,” Lelling said.

The blasts occurred while Columbia was replacing cast-iron pipes with plastic lines. They damaged about 131 homes and commercial buildings and prompted the evacuation of thousands of residents.

Prosecutors said Columbia failed to account for pressure detectors while workers replaced aging cast-iron pipes and failed to follow any plan to prevent the over-pressurization that resulted.

The allegations mirrored the findings of the National Transportation Safety Board, which in September said that “weak engineering management” did not adequately plan and oversee the project.

No individual employees will be charged, Lelling said, as the case was the result of not one person’s actions but a “complete organizational failure.”

The deal is separate from a $143 million settlement the company reached in July to resolve lawsuits brought by residents and businesses affected by the explosions and an $80 million accord it struck with the three communities.

Columbia also last year reached a settlement with the family of a teenager killed during the gas explosions.

Under the terms of Wednesday’s agreements, NiSource has agreed to forfeit to the government any profits from the sale of Columbia, whose operations will be subject to monitoring during a three-year probationary period.