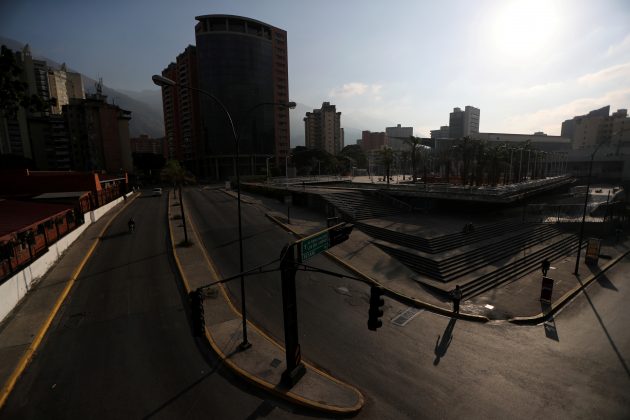 Commercial area is pictured during a blackout in Caracas, Venezuela March 26, 2019. REUTERS/Ivan Alvarado

By Vivian Sequera and Brian Ellsworth

CARACAS (Reuters) – Venezuela canceled work and school on Tuesday as the second major blackout this month left streets mostly empty in Caracas and residents of the capital wondering how long power would be out amid a deepening economic and political crisis.

President Nicolas Maduro’s Socialist government, which blamed the United States and the opposition for the previous power cut, blamed an “attack” on its electrical system for the blackout that first hit on Monday. The outage shuttered businesses, plunged the city’s main airport into darkness and left commuters stranded in Caracas.

The blackout came amid tensions with the United States over the weekend arrival of Russian military planes, which led Washington to accuse Moscow of “reckless escalation” of the country’s situation.

Russia, which has major energy investments in OPEC member Venezuela, has remained a staunch ally of Maduro, while the United States and most other Western nations have endorsed opposition leader Juan Guaido.

Citing the constitution, Guaido in January assumed the interim presidency, saying Maduro’s re-election last year was fraudulent. Maduro says Guaido is a U.S. puppet attempting to lead a coup against him and has blamed worsening economic difficulties on sanctions imposed by Washington.

Power was restored to much of the country by Monday evening but went out again during the night.

Western cities, including Maracaibo and Barquisimeto, both in the west of the South American country, as well as the central city of Valencia, had no power on Tuesday, according to witnesses.

Many people on Caracas’ streets went to work because they did not know about the government’s suspension of the workday, which was announced by the presidential press office in a 4 a.m. (0800 GMT) tweet.

“How am I supposed to find out, if there’s no power and no internet?” said dental assistant Yolanda Gonzalez, 50, waiting for the bus near a Caracas plaza. “Power’s going to get worse, you’ll see.”

Information Minister Jorge Rodriguez on Monday said the blackout that began in the early afternoon was the result of an attack on Venezuela’s main hydroelectric Guri dam which had affected three major transmission lines.

Rodriguez did not explicitly blame Monday’s outage on any particular individual or group. But he said, “the intention of Venezuela’s far right is to attack, generate anxiety and anguish, in order to seize power and steal all our resources.”

The country suffered its worst blackout ever starting on March 7. For nearly a week it left millions of people struggling to obtain food and water and hospitals without power to treat the sick. Looting in the western state of Zulia destroyed hundreds of businesses.

Electricity experts say the outages are the result of inadequate maintenance and incompetent management of the power grid since the late President Hugo Ch&aacute;vez nationalized the sector in 2007.

Russia, which has warned Washington against military intervention in Venezuela, declined to comment on the planes on Tuesday or respond to the accusations from the U.S. State Department.

Venezuelan Socialist Party Vice President Diosdado Cabello confirmed that two planes had flown to the country from Russia during the weekend, but he did not give a reason or say whether they carried troops.

In 2017, U.S. President Donald Trump said the “military option” was on the table regarding Venezuela, prompting a strong backlash from regional leaders wary of U.S. troops being deployed to Latin American soil.

U.S. Senator Marco Rubio – like Trump, a Republican – on Tuesday wrote on Twitter, “I hope the members of Congress &amp; the regional leaders who said they opposed U.S. ‘military intervention’ in #Venezuela will be just as forceful now that #Russia is sending (its) military to Venezuela.”