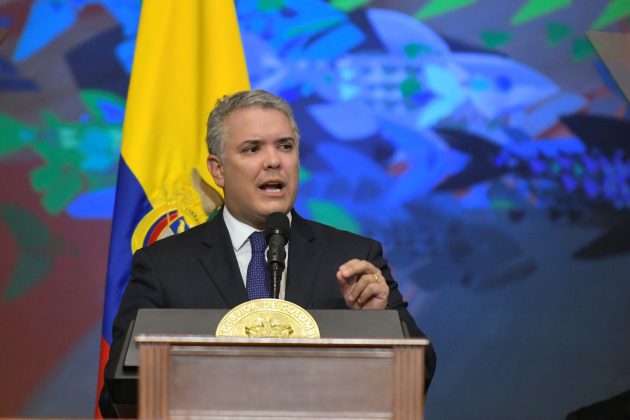 BOGOTA (Reuters) – Venezuelan President Nicolas Maduro has turned his country into a terrorist sanctuary and committed the grave error of protecting guerrilla groups and drug traffickers, Colombian President Ivan Duque said on Monday, as tensions between the neighboring countries escalated once again.

Tensions have worsened since Duque joined the United States and most Latin American countries in recognizing Juan Guaido, president of Venezuela’s opposition-controlled National Assembly, as the country’s rightful leader, arguing that Maduro’s 2018 re-election was illegitimate.

“What we are seeing is that not only has (Maduro) harbored Colombian terrorists for many years, but he ratifies more and more that Venezuela is a sanctuary for terrorists and drug traffickers,” Duque said in Shanghai, China, where he is on an official visit.

Maduro said over the weekend that Seuxis Paucias Hernandez and Luciano Marin, known respectively by their nom de guerres Jesus Santrich and Ivan Marquez, were “leaders of peace.”

Santrich and Marquez both joined the FARC’s political party after the leftist rebel group demobilized under a 2016 peace deal that ended decades of civil war. They were set to serve in congressional seats reserved for the group.

But Marquez went missing last year after his nephew was arrested and taken to the United States to cooperate with drug-trafficking investigators.

Earlier this month Colombia’s Supreme Court ordered Santrich’s arrest after he failed to appear for questioning about U.S. drug-trafficking charges.

“There is not one doubt that Santrich is protected by that dictatorial regime,” Duque said of Venezuela. “This is one more motivation to keep strengthening the diplomatic blockade.”

Duque has repeatedly said Santrich might have fled to Venezuela. Maduro said on Sunday he had learned of Santrich’s possible presence in Venezuela from Duque’s statement.

Colombian authorities believe dissident FARC rebels, who did not demobilize under the peace accord, and fighters for the leftist National Liberation Army (ELN) rebel group hide in Venezuela and receive protection from Maduro. Maduro’s government has denied protecting rebels.

Maduro, who calls Guaido a U.S. puppet seeking to oust him in a coup, broke off diplomatic relations with Bogota in February after Guaido’s failed attempt to bring humanitarian aid into Venezuela via the Colombian border.