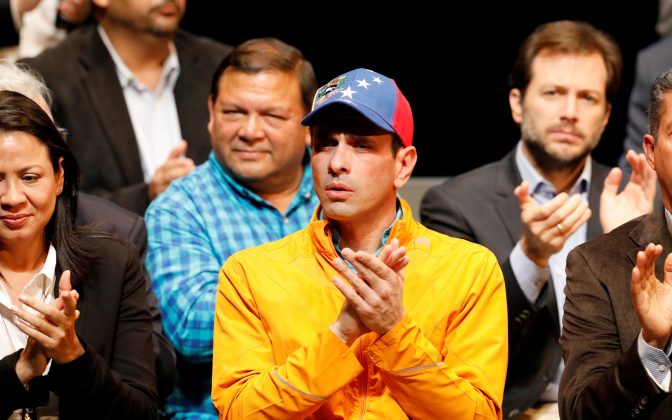 CARACAS (Reuters) – President Nicolas Maduro’s foes announced plans on Monday for an unofficial referendum to let Venezuelans have their say on his plan to rewrite the constitution and the opposition’s alternative push for an election to replace him.

The opposition, starting a fourth month of street protests against the socialist government it decries as a dictatorship, will organize the symbolic vote for July 16 as part of its strategy to delegitimize the unpopular Maduro.

Venezuelans will also be asked their view on the military’s responsibility for “recovering constitutional order” and the formation of a new “national unity” government, the Democratic Unity coalition announced.

The opposition’s planned vote, likely to be dismissed by the government, would be two weeks ahead of a planned July 30 vote proposed by Maduro for a Constituent Assembly with powers to reform the constitution and supersede other institutions.

According to a recent survey by pollster Datanalisis, seven in 10 Venezuelans are opposed to rewriting the constitution, which was reformed by late leader Hugo Chavez in 1999.

Maduro, 54, Chavez’s unpopular successor, says the assembly is the only way to bring peace to Venezuela after the deaths of at least 84 people in and around anti-government unrest since the start of April.

“The people have a right to vote and the people will vote on July 30, rain or shine!” Maduro said to cheers during a speech at an open-air event on Monday with candidates to the new assembly, during which he also prayed and danced.

Opponents say Maduro’s plan is a ruse to consolidate the ruling Socialist Party’s grip on power and avoid a conventional free election that opinion polls show he would lose.

Critics also accuse the government of threatening people with layoffs or loss of state-provided homes if they do not vote. Maduro on Monday urged state workers to participate, saying for instance that every single employee of state oil company PDVSA should cast a ballot.

The next presidential vote is due by the end of 2018, but protesters have been demanding it be brought forward, even as Maduro’s opponents worry about how free and fair such a vote would be.

The two highest-profile potential opposition candidates for a presidential election are Capriles, who has been barred from holding office, and Leopoldo Lopez, who is in jail.

Opposition protesters also want solutions to a crushing economic crisis, freedom for hundreds of jailed activists, and independence for the National Assembly.

Maduro, a former foreign minister who was narrowly elected in 2013 after Chavez’s death from cancer, says protesting opponents are seeking a coup with U.S. support.

His allies say that a new Constituent Assembly would annul the existing legislature and would also remove chief state prosecutor Luisa Ortega, who has split with the socialists during the crisis and become a thorn in their side.

Officials have turned on Ortega and are petitioning the Supreme Court to remove her. On Monday, the comptroller’s office announced a national audit of state prosecutors’ offices.

Ortega’s office described it as “revenge for the current institutional crisis” and accused comptroller officials of “abuses” in trying to enter buildings without prior notice.

“The darkness does not last forever nor does it extend in its totality,” Ortega said in an address to the National Assembly. “We must make big efforts to reactivate the institutional and electoral paths.”