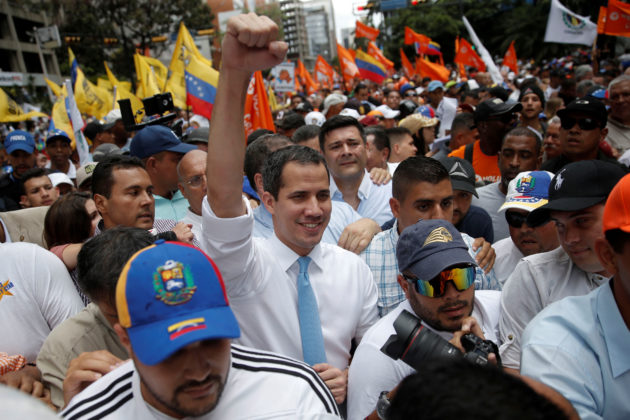 Venezuela's National Assembly President and opposition leader Juan Guaido, who many nations have recognised as the country's rightful interim ruler, rises an arm as he takes part in a demonstration in Caracas, Venezuela March 10, 2020. REUTERS/Manaure Quintero

CARACAS (Reuters) – Venezuela’s opposition on Tuesday will march to downtown Caracas with the aim of regaining control of the national legislature, which was snatched by pro-government lawmakers in January, setting up a showdown with President Nicolas Maduro’s government.

National Assembly President Juan Guaido for weeks has urged Venezuelans to join the rally as a way of reviving street protests against Maduro that surged in 2019, but have waned as the ruling Socialist Party has clung to power.

The rally will be another test of Guaido’s capacity to mobilize supporters, who have become increasingly weary with the country’s economic crisis and the opposition’s inability to oust Maduro despite a broad U.S. sanctions program.

“On March 10, Venezuelans will exercise our rights in the streets,” Guaido told reporters at a Monday news conference about the march. “The only option available for Venezuelans is to escape this disaster.”

The protest is likely to meet stiff resistance from security forces, which were deployed around the country on Monday as part of military exercises ordered by Maduro.

Troops may not allow the marchers, who will include members of Parliament, to reach the legislative palace. Lawmakers will seek a different venue to hold session if they are not allowed to reach congress, according to one opposition source.

The government has called its own separate rallies in downtown Caracas for Tuesday. Socialist Party Vice President Diosdado Cabello said the opposition’s march was an attempt to rally its flagging energy.

“Every time the right-wing is cornered, they look for events that can raise the excitement of people who stopped being excited a long time ago. They try to create leadership where there is none,” Cabello said during Monday a news conference.

In January, a group of legislators backed by the Socialist Party installed themselves as the leaders of congress after troops blocked Guaido from entering the legislature.

Opposition lawmakers later re-elected Guaido for a second term in an extra-mural session, but they have been largely unable to meet at the legislative palace since then.

Venezuela this year is slated to hold parliamentary elections, but the opposition has not yet determined if it will participate due to concerns that the government will not provide adequate conditions.