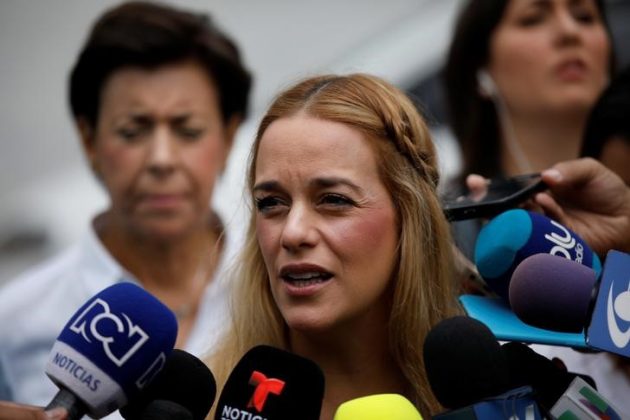 CARACAS (Reuters) – Venezuelan intelligence agents have entered the home of opposition leader Leopoldo Lopez, who is under house arrest for leading protests against President Nicolas Maduro, Lopez’s wife said on Twitter on Thursday.

The arrival of agents of the Sebin came hours after the New York Times published a story in which Lopez described how security forces have sought to prevent him from speaking with reporters.

“Sebin has entered our house and they remain here,” Lilian Tintori tweeted. “It is illegal and inhumane for Sebin to be inside our home with weapons, in the presence of our three children.”

The office of the vice presidency, which oversees Sebin, did not answer calls seeking confirmation and the Information Ministry did not respond to an email seeking comment.

Lopez is the best-known of dozens of imprisoned opposition activists and leaders accused by Maduro of seeking to overthrow his government through street protests in 2014 and 2017.

He was arrested in 2014 and convicted of having incited protests against Maduro, who describes Lopez as “monster” responsible for dozens of deaths in demonstrations.

Lopez was granted house arrest in July. After calling on citizens to continue protests against Maduro in an internet video, he was taken back to jail in August but returned several days later to house arrest.

Opposition leaders and critics around the world have slammed the case against him as a sham and described the trial as a mockery of justice.

In 2015, one of the prosecutors who led the case said the conviction had been unfair and that he had been under constant pressure from superiors.

Former Chief Prosecutor Luisa Ortega, who was sacked last year, said in February she had been pressured about the case by high-ranking Socialist Party officials.