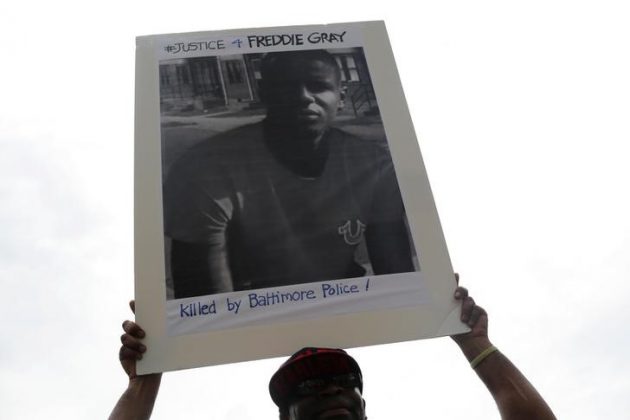 A man participates in a protest in Union Square after Baltimore Police Officer Caesar Goodson Jr. was acquitted of all charges for his involvement in the death of Freddie Gray in the Manhattan borough of New York, U.S., June 23, 2016. REUTERS/Andrew Kelly

Reuters) – A Maryland judge is scheduled to hand down a verdict on Monday in the manslaughter trial of the highest-ranking Baltimore police officer charged in the death of black detainee Freddie Gray.

Lieutenant Brian Rice, 42, is the fourth of six officers to be tried for Gray’s death in April 2015 from a broken neck suffered in a police van. Prosecutors have yet to secure a conviction in the high-profile case.

Gray’s death triggered protests and rioting in the mainly black city and stoked a national debate about how police treat minorities. That debate flared anew this month with the deaths of African-American men at the hands of police in Minnesota and Louisiana.

Baltimore City Circuit Court Judge Barry Williams has said he will announce his verdict at 10 a.m. EDT. He is hearing the case in a bench trial after Rice waived his right to a jury trial.

Rice, who is white, ordered two bicycle officers to chase Gray, 25, when he fled unprovoked in a high-crime area. The officer helped put Gray, who was shackled and handcuffed, into the police wagon face down on its floor.

Prosecutors said Rice was negligent in shackling Gray’s legs and not securing him in a seat belt, as required by department protocol.

But defense lawyers have said Rice was allowed leeway on whether to get inside a van to secure a prisoner. The officer made a correct decision in a few seconds while Gray was being combative and a hostile crowd was looking on, they said.

Rice is charged with involuntary manslaughter, misconduct in office and reckless endangerment. He could face at least 15 years in prison if convicted on all charges.