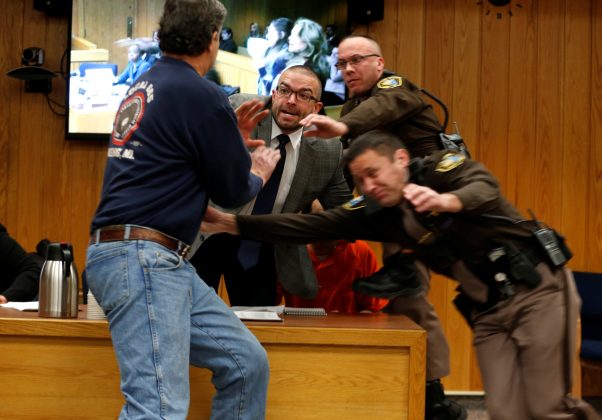 (Editor’s Note: Please be advised that this story contains language in fifth paragraph that may offend some readers)

(Reuters) – The enraged father of three daughters sexually abused by Larry Nassar charged toward the former USA Gymnastics national team doctor and tried to attack him during a sentencing hearing in a Michigan courtroom on Friday.

He was nearly within striking distance of Nassar before court guards tackled him roughly to the ground in front of his shocked daughters.

The chaotic scene began after sisters Lauren and Madison Margraves had finished tearfully reading their victim statements on the second day of hearings at a court in Eaton County, much as nearly 200 women have done before them at earlier hearings. Standing alongside his daughters and wife, Randall Margraves, a tall man with an intense gaze dressed in an electricians’ union sweatshirt, then asked to speak.

“I would ask you as part of the sentencing to grant me five minutes in a locked room with this demon,” he said to the judge, gesturing toward Nassar, who has already been sentenced to up to 175 years in prison at an earlier hearing after pleading guilty to molesting young women under the guise of medical treatment.

Judge Janice Cunningham told him he knew she could not do that, and chastised him after he called Nassar a son of a bitch. He asked for one minute alone instead. The judge demurred as some in the courtroom laughed uncomfortably.

Margraves then bolted toward Nassar, seated in an orange jump suit behind a nearby table. His daughters’ hands flew to their mouths, and one of Nassar’s lawyers moved to shield his client.

Gasps, cries and shouts filled the courtroom as Margraves was wrestled to the ground, knocking things off a desk on the way down, and put in handcuffs while Nassar was taken out to safety.

“One minute!” he demanded repeatedly, his head pinned to the floor. As court officers pulled him from the room, he implored them, “What if this happened to you guys?” Some victims fled the room in tears.

Looking distressed, the lead prosecutor, Angela Povilaitis, turned to the victims and relatives in the courtroom and tried to restore calm, saying she did not want to see anyone else end up in handcuffs.

“I understand Mr. Margraves’ frustration but you cannot do this,” she said. “This is not helping your children.”

The hearing resumed after a short break, with the judge addressing what she called a “scary” scene.

“My heart started beating fast and my legs started shaking,” Cunningham said. “We cannot react by using physical violence,” she told the courtroom, noting she could not imagine Margraves’ pain as a father. Nassar was back in his seat, looking downcast.

The hearing then reverted to the ritual established at earlier sessions: woman after woman rising to confront Nassar with accounts of a revered doctor they trusted making them strip naked and penetrating them with ungloved hands, and affirmations that they are no longer victims but survivors.

Margraves was being held in a cell at the courthouse, according to a corrections officer, but it was not immediately clear whether he would face any charges.

People reacted on social media with empathy for Margraves, with some offering to help cover any legal costs he faces.

Views were more mixed at the courthouse.

“If he had gotten some licks in, I wouldn’t have cried over it,” Lavonda Simon, whose daughter was among Nassar’s victims, said. “I totally understand the feeling of wanting to hurt him. You bet.”

Mariah McClain, who testified about Nassar’s abuse of her after the break, said she had to leave when Margraves erupted.

“It was very upsetting,” she said. “It was just too much for me.”

Nassar, who is also serving a 60-year federal term for child pornography convictions, has sparked broader outrage after numerous victims accused USA Gymnastics, the sport’s governing body, and Michigan State University, where Nassar worked, of failing to investigate complaints about him going back years.

U.S. Olympic officials have also been criticized by some of the sport’s biggest stars, including gold medalists Aly Raisman, Simone Biles and McKayla Maroney. Multiple investigations, including at least two by members of the U.S. Senate and House of Representatives, are ongoing into how Nassar was able to abuse women for so long.