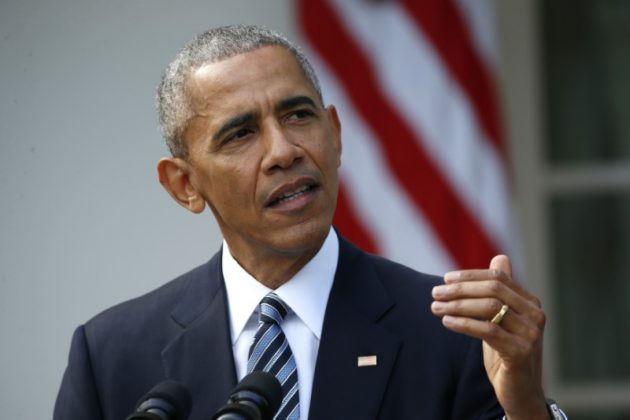 U.S. President Barack Obama delivers a statement the morning after Donald Trump was elected as the next U.S. president in Washington, U.S., November 9, 2016. REUTERS/Kevin Lamarque

WASHINGTON (Reuters) – U.S. President Barack Obama will host President-elect Donald Trump at the White House on Thursday to take the first public step in a transition of power after a bitterly fought election campaign that ended with the Republican businessman’s surprise victory.

The two men have had almost no one-on-one contact previously. Trump led the “birther” movement that questioned Obama’s U.S. citizenship and has pledged to overturn the Democrat’s signature policy achievements after he takes office on Jan. 20

Obama campaigned vigorously for Trump’s Democratic rival, former Secretary of State Hillary Clinton, and called Trump both temperamentally unfit for the presidency and dangerously unprepared to have access to U.S. nuclear codes.

They will seek to put that history behind them, at least for the cameras, during a meeting in the Oval Office at 11 a.m. (12.00 p.m. ET.) First lady Michelle Obama will also meet privately with Trump’s wife, Melania, in the White House residence.

Trump’s private plane, emblazoned with his surname on the side, landed at Washington’s Reagan National Airport after a short flight from New York.

On Wednesday, Obama said that despite his major differences with the New York real estate magnate, he would follow the lead of former Republican President George W. Bush in 2008 and ensure a smooth handover to Trump.

Trump spent Wednesday focusing on that transition during meetings with his staff at Trump Tower in New York.

While Democratic politicians in Washington were urging cooperation with the newly-elected president, anti-Trump demonstrators across the United States late on Wednesday were showing no sign of conciliation.

“Not my president,” shouted hundreds in New York. Demonstrators sat down on a highway interchange in Los Angeles blocking traffic and 1,800 people in Chicago chanted “No Trump! No KKK! No racist USA” outside the Trump International Hotel and Tower.

Republican Chris Christie, who is leading Trump’s transition team, on Thursday told NBC’s “Today” program, “We heard a lot about the peaceful transfer of power during this election, and I think you’ll see that symbolized today.”

During the campaign Trump hinted that he might not accept the result if he lost to Clinton.

Asked whether Trump would apologize to the president for questioning his birthplace and legitimacy, the New Jersey governor, who could end up with a job in the Trump administration, said the controversy was just politics, adding: “They have a lot more important things to talk about.”

After taking office, Trump will enjoy Republican majorities in both chambers of the U.S. Congress that could help him implement his legislative agenda and scrap or roll back Obama policies that he dislikes, such as the “Obamacare” healthcare law, the nuclear deal with Iran and U.S. participation in the Paris agreement to fight global warming.

White House spokesman Josh Earnest said Obama would brief Trump about the benefits of those policies during their meeting.

Trump said after his victory that he would work to heal the divisions set off by the bitter campaign. Clinton urged her disappointed supporters to give Trump an “open mind” and Obama said he was rooting for his successor.

The White House has laid out its plan to ensure a smooth transition, including giving representatives selected by Trump briefings on the work of U.S. federal agencies.

Ryan and Trump shared a strained relationship during the campaign, although they both ultimately said they supported each other. McConnell also kept a distance from Trump for most of the campaign.

Trump and Ryan will “discuss how they can hit the ground running in a Trump administration” at the meeting, which will also include Vice President-elect Mike Pence, according to a Republican source.

Pence, who served in the House, is expected to be a conduit between U.S. lawmakers and Trump, who has never before held public office. Vice President Joe Biden will hold a separate meeting with Pence at the White House on Thursday.