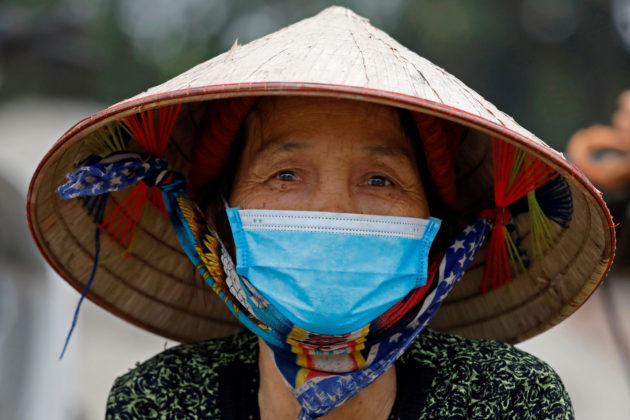 Vietnam quarantines rural community of 10,000 because of coronavirus
By Phuong Nguyen

HANOI (Reuters) – Vietnam has quarantined a community of 10,000 people near the capital, Hanoi, for 20 days because of fears the coronavirus could spread there, two local officials told Reuters on Thursday.

The rural commune of Son Loi, in the northern Vietnameseprovince of Vinh Phuc, 44 km (27 miles) from Hanoi, is home to11 of the 16 coronavirus cases in the Southeast Asian country,including a three-month-old baby.

“Over 10,000 residents of the commune will not be permitted to leave for the next 20 days, starting from today,” the second of the two the officials told Reuters on Thursday.

“As of this evening, we will still allow those who wish to return home to enter but, in the next few days, this place will be totally be sealed,” the official told Reuters by phone.

Both officials declined to be identified citing the sensitivity of the situation.

The coronavirus arrived in Vinh Phuc after people from the province who had been in the central Chinese city of Wuhan, where the virus was first detected, returned home to Vietnam for the Lunar New Year holiday.

The province is home to factories operated by Japan’s Honda and Toyota.

On the same day, a Reuters photographer could see checkpoints manned by police and marked by coronavirus warning signs already in place outside Son Loi. People were still allowed to enter and leave the commune, which has a population of 10,641, according to official data.

Health officials wearing protective suits sprayed disinfectant on vehicles at the checkpoints. Local authorities have set up shops and provided food and face masks for residents there, the first official said.

“Everything is still under control,” said the official. “We are trying very hard to stop the virus spreading to other areas and provinces.”

Vietnam declared a public health emergency over the epidemic on Feb. 1 and banned all flights to and from China, where more than 1,300 people have died from the virus.

The southeast Asia country has made plans to quarantine hundreds of Vietnamese citizens returning from China, including 950 at military camps outside Hanoi, and another 900 at temporary facilities on the Vietnam-China border.