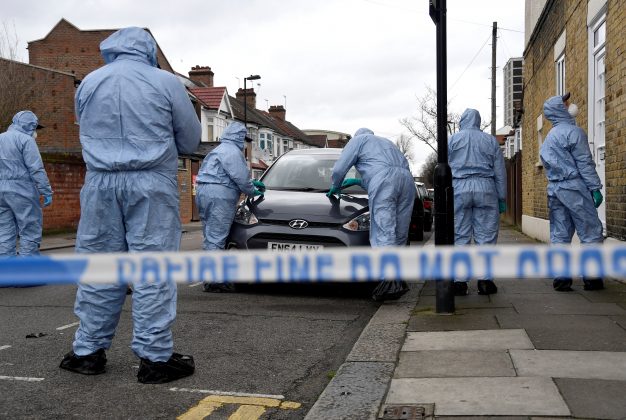 Forensic investigators examine a car on Chalgrove Road, where a teenage girl was murdered, in Tottenham, Britain, April 3, 2018. REUTERS/Toby Melville

LONDON (Reuters) – London police investigated more murders than New York over the last two months, statistics show, as the mayor’s office condemned a “violent scourge” on the city’s streets after another weekend of bloodshed.

A 17-year-old girl died after she was found with gunshot wounds in Tottenham, north London, and a man was fatally stabbed in south London on Sunday.

“The Mayor is deeply concerned by violent crime in the capital – every life lost to violent crime is a tragedy,” a spokeswoman for London Mayor Sadiq Khan said in a statement on Tuesday. 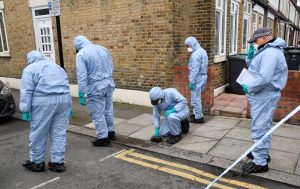 Forensic investigators examine the pavement and carriageway on Chalgrove Road, where a teenage girl was murdered, in Tottenham, Britain, April 3, 2018. REUTERS/Toby Melville

“Our city remains one of the safest in the world … but Sadiq wants it to be even safer and is working hard to bring an end to this violent scourge.”

There were 15 murders in London in February against 14 in New York, according to London’s Metropolitan Police Service and the New York Police Department. For March, 22 murders were investigated in London, with 21 reports in New York.

Including January’s figures, there have still been more murders in New York, which has a similar-sized population to London, but British politicians and police are increasingly expressing concern about the higher UK numbers, driven by a surge in knife crime.

“It makes [violence] faster, it makes it harder for people to cool down,” she told the Times. “I’m sure it does rev people up.”

Prime Minister Theresa May’s spokesman said on Tuesday: “there can be no place in our society for violent crime. The government is determined to do everything it can to break the cycle.”