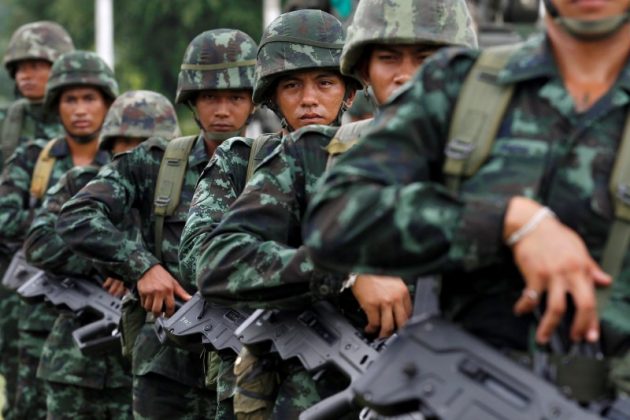 BANGKOK, Thailand (Reuters) – Thailand votes on Sunday for a new constitution that aims to subdue political parties and give the generals a permanent role in overseeing the country’s economic development, senior military officers say.

The kingdom of Thailand has a long history of coups. But interviews with officers, including two generals, show the military’s ambition is to make such interventions unnecessary by weakening political parties and maintaining permanent influence over elected governments.

Future governments, they said, would be legally obliged to follow a 20-year national development plan set by the army.

Under the proposed charter, which would replace one torn up following the May 2014 coup, a junta-appointed Senate with seats reserved for military commanders would check the powers of elected lawmakers.

“They will be sitting there to make sure all the reforms will be carried out and at the same time make sure the newly elected government does exactly what they’re supposed to do,” General Thawip Netniyom, chief of Thailand’s National Security Council (NSC), told Reuters.

The generals, he said, would be baby-sitting, “somewhat”.

One clause in the draft constitution would allow an unelected prime minister to take power in the event of a political crisis – that’s what happened in 2014 when army chief Prayuth Chan-ocha led a coup against the elected government of Yingluck Shinawatra and  afterward became prime minister.

Thailand’s military has always been powerful, but the 2014 coup established it as the nation’s preeminent institution – arguably more powerful than even the monarchy, which faces uncertain times as the health of revered King Bhumibol Adulyadej, 88, fades.

It has long been assumed the military is keeping a tight grip on power to oversee the royal succession. But interviews with the generals disclosed the new constitution is part of a fundamental political restructuring guaranteeing the military a permanent role in how Thailand is run.

The draft constitution allows the military and its allies to “legally compel” future governments to execute a 20-year plan rather than their own short-sighted populist policies, said Major General Weerachon Sukondhapatipak, the deputy government spokesman.

No Thai government has ever adopted a 20-year national strategy, never mind implemented it.

The plan itself is still a work in progress, said Weerachon. Executed by both the public and private sector, it will be divided into five-year periods and provide a blueprint for reforms on social, economic and political issues.

Since helping to overthrow an absolute monarchy in what was then the Kingdom of Siam in 1932, the military has staged 19 coups, 12 of them successful, and has provided 12 of its 29 prime ministers in that time.

The junta has appeared particularly sensitive to criticism in the lead-up to the vote. Dozens of activists and politicians have been arrested in recent weeks for campaigning against the constitution.

No such restrictions apply to the “yes” vote, with the junta   broadcasting songs and television programs to drum up support for the constitutional referendum.[L4N1A72VE]

It is unclear what will happen if the draft is rejected, which would raise questions about the junta’s roadmap to a promised general election next year.. Polls show a large majority of Thailand’s 50 million voters are undecided.

Interviews with Thai officers show that while the military has lost  faith in civilian rule, it recognizes that democracy – or the military’s version of it – is integral to Thailand’s development and international image.

Elected politicians, said the officers, could never be trusted to act in the national interest because voters only chose parties that promise wasteful populist policies.

“Every government policy was based on its own political interest, and that leads to many problems – corruption, inequality, dispute,” said Weerachon, the deputy spokesman.

If recent governments had followed the long-term plans of  technocrats, rather than pursuing their own policies, “Thailand would be a developed country by now,” he said.

The draft constitution would preclude the need for any future coups because the military, which historically has operated independently of civilian rule, would have indirect but decisive power over future governments.

“The idea is to never have another coup,” said Thawip. “We wish that this won’t need to happen.”

It is a radical vision, and one that signals the rise of a politically ambitious class of officers not seen for a generation. They were forged by the previous coup in 2006, which overthrew populist Prime Minister Thaksin Shinawatra.

That coup’s failure to bring stability to Thailand ultimately convinced the military to get more involved in politics, not less, and to rewrite the rules of the game.

Key personnel in the 2006 coup belong to a military faction nicknamed the “Eastern Tigers,” formally known as the 2nd Infantry Division of the First Army Region. Coup leader Prayuth  and his powerful deputy, Ge.l Prawit Wongsuwan, are both from “Eastern Tigers” regiments.

Thawip said it didn’t matter which political party won the next election, “as long as we make sure they will follow the new constitution.” The aim of the constitution was “to keep watching or controlling the government’s actions (to) make sure they aren’t doing anything that undemocratic.”

The Jakkapong army camp in Thailand’s eastern Prachin Buri province, where the Eastern Tigers hail from, is the cradle of this ambitious new generation of officers.

Obedience, said Major Pongpon Wijitkarn, a drill instructor at the camp, is the first quality demanded of new recruits and one the military demands of civilian politicians.