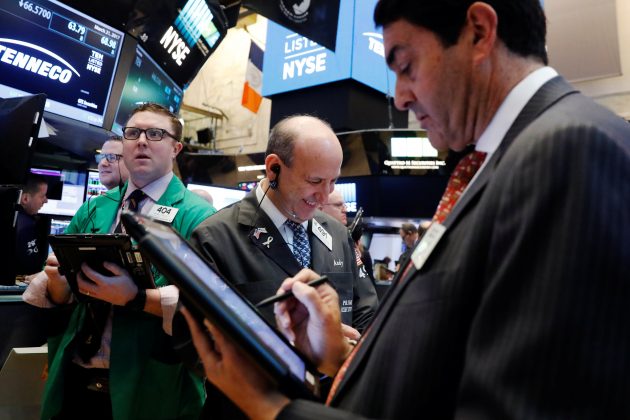 (Reuters) – Wall Street fell sharply on Tuesday as investors worried that President Donald Trump will struggle to deliver promised tax cuts that propelled the market to record highs in recent months, with nervousness deepening ahead of a key healthcare vote.

The S&P 500 and Dow Jones Industrial Average lost over 1 percent in their worst one-day performances since before Trump’s election victory in November.

The S&P financial index <.SPSY> sank 2.87 percent, its biggest daily fall since June. That added to losses in the sector since the Federal Reserve last week raised interest rates by 25 basis points and signaled it would remain on a gradual pace of hikes, a less aggressive stance than some investors expected.

Banks benefit from higher interest rates and their stocks are sensitive to changes in expectations of how quickly the Fed will adjust rates. Bank of America <BAC.N> slumped 5.77 percent, the biggest drag on the S&P 500, while a 3.72-percent drop in Goldman Sachs <GS.N> pulled the Dow lower.

“There was a feeling the Fed was going to possibly be more hawkish last week. That didn’t happen,” said Mark Kepner, managing director at Themis Trading in Chatham, New Jersey. “That takes a little out of the higher rates that the banks want.”

Republican party leaders aim to move controversial healthcare legislation to the House floor for debate as early as Thursday. But they can only afford to lose about 20 votes from Republican ranks, or risk the bill failing, since minority Democrats are united against it.

With valuations stretched, investors see the Trump administration’s struggles to push through the healthcare overhaul as a sign he may also face setbacks delivering promised corporate tax cuts. Expectations of those tax cuts are a major reason for the 10-percent surge in the S&P 500 since Trump’s election.

“The market is starting to get a little fed up with the lack of progress in healthcare because everything else is being put on the back burner,” said RJ Grant, head of trading at Keefe, Bruyette & Woods in New York.

The financial sector has been the best performing of the 11 major S&P sectors since Trump’s election, surging 18 percent on his proposals to cut bank regulations and reduce taxes.

Under Trump, Wall Street has become unaccustomed to steep selloffs. The last time the S&P 500 lost 1 percent or more in a day was 110 trading sessions ago on October 11. Over the past two years, the S&P 500 has suffered losses of 1-percent or more about once every 11 sessions, according to Thomson Reuters data.

But investors have grown worried about elevated valuations. The S&P 500 is trading at about 18 times forward earnings estimates against the long-term average of 15, according to Thomson Reuters data.

Declining issues outnumbered advancing ones on the NYSE by a 3.92-to-1 ratio; on Nasdaq, a 5.25-to-1 ratio favored decliners.

About 8.3 billion shares changed hands in U.S. exchanges, compared with the 7.1 billion daily average over the last 20 sessions.