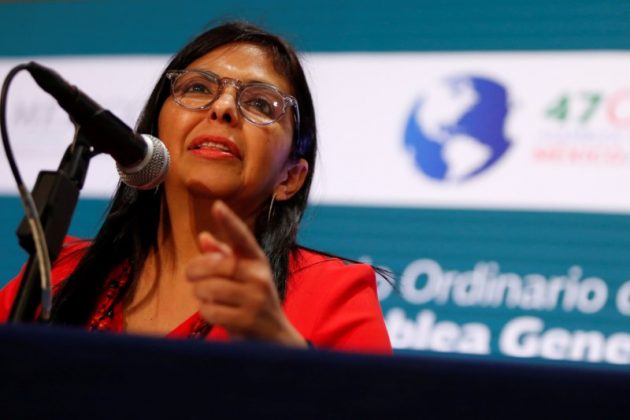 CANCUN, Mexico (Reuters) – Governments from across the Americas chastised Venezuela’s socialist leadership on Tuesday for its handling of a political and economic crisis, prompting the OPEC nation’s foreign minister to call the critics “lapdogs of imperialism.”

The United States, Brazil and 10 other members of the 34-nation Organization of American States (OAS) issued a letter accusing Venezuela of undermining democracy, failing to feed its people and violating rights.

“Considering the interruption of the democratic process in the Bolivarian Republic of Venezuela, we believe that there should be a settled solution that includes all Venezuelan parties for the benefit of the people of that nation,” said the letter issued at the OAS general assembly in Cancun, Mexico.

It called for the release of political prisoners, respect for rights, an election timetable, a “humanitarian channel” to ship food and medicine, and the creation of a group or mechanism to help “effective dialogue among Venezuelans.”

The 12 nations also called on Venezuelan President Nicolas Maduro to abandon a July 30 vote for a super-body with powers to rewrite the country’s constitution. Critics see Maduro’s move as a ploy to hold on to power.

Rodriguez said the country’s planned constituent assembly was the only way to overcome the current crisis peacefully and called her critics “lapdogs of imperialism.”

“Do you want war? Is that what you want for Venezuela?” the minister said, wearing a red dress, the color identified with Venezuela’s Socialist Party. She accused OAS Secretary General Luis Almagro of trying to stir up a civil war in Venezuela.

“Great, we’ve reached the boss,” she said as U.S. Deputy Secretary of State John Sullivan began a speech, repeating her jibe that the OAS is an arm of U.S. diplomacy.

Sullivan asked members of the OAS “to do right by the people of Venezuela” through the creation of a group to help facilitate a resolution.

Rodriguez said: “The only way you could impose this on us is with your Marines, which would meet a strong response in Venezuela.”

She said Venezuela would never go back to the OAS.

But she left the door open to participating in further meetings, saying that although Venezuela left the organization there was a two-year administrative period to finalize the departure in which it could still participate.

“Instead of responding to all of us who want peace for your people, why not tell us how you are going to resolve the crisis they are living?” Aguero said.

A meeting on the sidelines failed on Monday to agree on a resolution formally rebuking Venezuela, where 75 people have been killed in protests in recent weeks.

“A resolution, a strong declaration from this organization, is probably the only realistic way of avoiding a blood bath in Venezuela,” said Jose Miguel Vivanco, the executive director Americas for Human Rights Watch.

Some of the meeting’s participants remained optimistic they could reach a resolution and that Venezuela could avoid spiraling further into violence.

The foreign minister of Guatemala, a nation that faced a 36-year internal armed conflict that left some 200,000 people dead, voiced that sentiment.

“We don’t wish that on anybody, least of all Venezuela, and if we were able to sit down and negotiate, Venezuela needs to be able to do that too,” Foreign Minister Carlos Morales said.