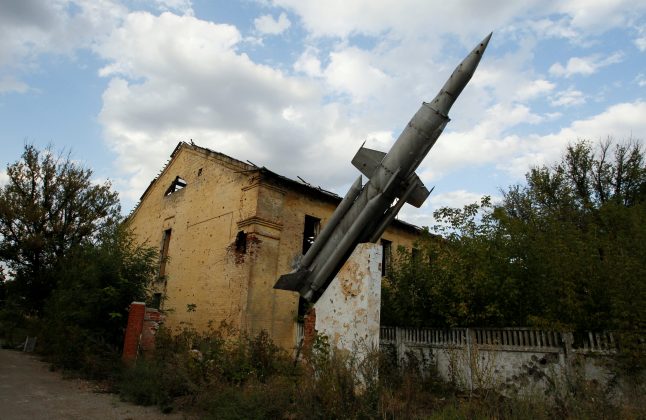 DONETSK, Ukraine (Reuters) – Ruined houses, shell craters and deserted streets – this is a typical scene in the Oktyabrsky district of Donetsk, the largest city of Ukraine’s pro-Russian rebel region that bears the same name.

The self-styled Donetsk and next-door Luhansk “people’s republics” broke away from central rule in 2014 after months of violent street protests in Kiev toppled Ukraine’s Moscow-leaning president and propelled pro-Western nationalists to power.

In this calm suburb of Donetsk, many people stood aloof of politics. But then fierce clashes broke out between Ukrainian government troops and pro-Russian separatists for control over the nearby Donetsk Airport.

A glistening air hub of steel and glass, specially built for the UEFA Euro 2012 of which Donetsk was a venue, the local airport was leveled to the ground, and many of the buildings in Oktyabrsky shared its fate.

A Reuters photo essay (http://reut.rs/2jONmoo ) captures images of hardship and despair of the dwellers of this district on the frontline of many battles.

Restored water and electricity supplies to local homes, with some households enjoying even gas supplies and heating, give a slight relief to some of the lucky locals as winter cold starts to bite.

“I try to keep away from politics, I only care about my family,” said Marina, aged 30. The woman, her husband and three children, one of whom is seriously ill, lost their house in 2014 when an artillery shell hit it.

“With no money, we were left in the street, with absolutely nothing. Everything burned, nothing was left … even spoons and forks were gone,” she said.

Her family changed several apartments, moving from one friend to another, before deciding that they would restore their house, using the bricks that had remained intact to build new walls. But they fast ran out of cash to buy construction materials.

The fragile ceasefire agreed in 2015 is often shattered by outbursts of gunfire and explosions of shells.

More than 8,000 private homes and more than 2,000 apartment houses were badly damaged in Donetsk, according to data provided by its administration. Most of these homes are uninhabitable and cannot be rebuilt.

A total of 64 temporary shelters for those who lost their homes in the war have been organized in various parts of Donetsk, a city of around one million residents.

Sometimes, student hostels accommodate the homeless. They include Alexandra Nikolayevna, 68, who survives with her several grandchildren at “University Hostel No.4” mainly due to handouts of humanitarian aid.

The fourth year of this ordeal has failed to shatter her political views. “We must be only with Russia, we only hope for (Russian President Vladimir) Putin to take us under his wing,” she repeats. “Anyway, everyone says it’s Russian land.”

The feeling of relative normalcy which prevails in most parts of Donetsk, dissipates when you realise the city center is just slightly more than 10 km (6.3 miles) from the frontline.

The war is felt in the volatile rates of several currencies circulating in the city, in low wages and poor quality of local food.

And it is felt in the families which lost loved ones in the war that has claimed a total of more than 10,000 lives so far.