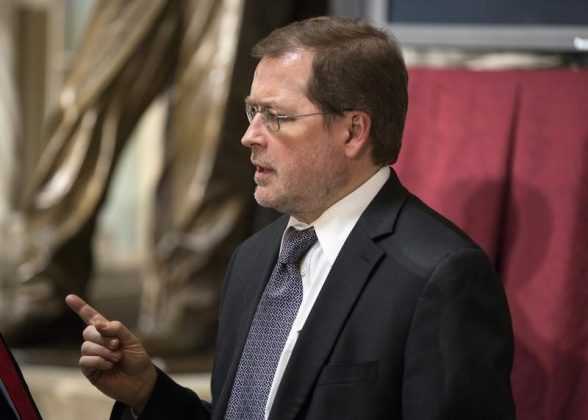 Grover Norquist, president of Americans for Tax Reform, speaks before the dedication of a statue of the late Senator Barry Goldwater (R-AZ) in Statuary Hall on Capitol Hill in Washington February 11, 2015. REUTERS/Joshua Roberts

By Ginger Gibson and David Morgan

WASHINGTON (Reuters) – Congressional Republicans are ramping up discussions on overhauling the U.S. tax code that a prominent Republican anti-tax advocate said on Wednesday will produce a bill by September with a hefty corporate tax cut.

Grover Norquist, head of the anti-tax Americans for Tax Reform and a lobbyist close to Republican leaders, said a “Big Six” group of Republican tax decision-makers was targeting the end of this month for producing a basic framework for a bill to be introduced in September.

“The House, the White House and the Senate have been meeting for a couple months. They’ll have a package in September,” said Norquist, a conservative tax and small-government activist who has met with Big Six members.

The group met on Wednesday evening and two members who emerged 45 minutes later said they were united on tax principles but offered no comment on whether they had agreed to a framework.

“We’re all on one page, on one unified page,” White House economic adviser Gary Cohn said.

House of Representatives Ways and Means Committee Chairman Kevin Brady also told reporters there was unity and to expect a statement in coming days.

Central to the discussion is the 35 percent corporate income tax rate, how much it can be cut and whether a cut can be made permanent. The White House wants to slash the rate to 15 percent for seven years, while congressional Republicans are trying to settle on a permanent rate that does not increase the deficit.

President Donald Trump and his representatives on the Big Six – Cohn and Treasury Secretary Steven Mnuchin – are “really excited about the 15 percent rate” for corporations, Norquist said.

Norquist has played a key role in tax negotiations in Washington for years.

The Big Six agree that Trump’s 15 percent corporate rate cannot be achieved on a permanent basis without adding to the federal deficit, administration officials said.

Such a steep tax rate cut would mean a revenue loss of more than $2 trillion over a decade, independent analysts say.

To solve the deficit issue, the White House is open to making the 15 percent rate temporary, with an expiration in seven years, Norquist said. That would conflict with Republicans in Congress who want a permanent tax overhaul, but it would ensure rates would not have to be renewed during Trump’s presidency.

Mnuchin said on Wednesday morning that the administration would be “sensitive to increasing the debt.”

“We are very close to releasing a detailed plan and I can assure you that we believe that detailed plan will be responsible on the impact on the economy and the cost to the debt,” he said.

Under current law, companies adhere to complex depreciation schedules for how long it takes for equipment to wear out and lose value.

Business groups have called for “100 percent expensing,” a policy that would let companies write off the entire price of equipment in the year of purchase. Former President Barack Obama pushed for temporary 100 percent expensing as a economic stimulus to help reverse the recession when he took office.

The White House is considering a three-year window to allow 100 percent expensing, Norquist said. After the three years, the rate would return to 50 percent, which is the current law.