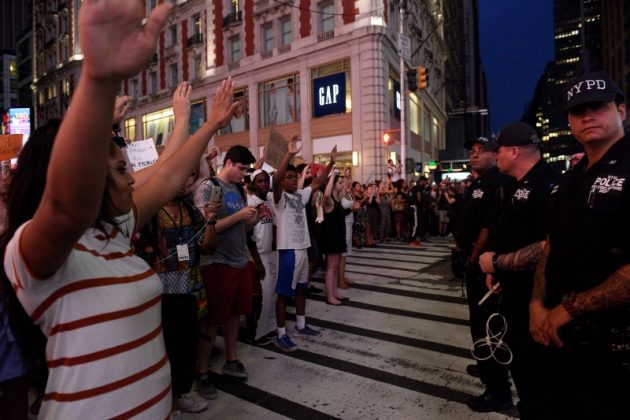 People hold their hands in the air as they yell "hands up, don't shoot!" during a protest for the killing of Alton Sterling and Philando Castile in the Manhattan borough of New York July 7, 2016. REUTERS/Darren Ornitz

SAN FRANCISCO (Reuters) – A wave of anti-police protests since the 2014 killing of an unarmed black teen in Ferguson, Missouri, is creating strains at law enforcement agencies across the United States, forcing out some police chiefs and top prosecutors.

A driving force behind the change has been Black Lives Matter, a national organization whose name is a potent symbol for demonstrators railing against police violence, according to law enforcement officials and academics.

“What Black Lives Matter has been able to do is to maintain a focus on this issue and a persistence that has lasted for over two years now,” said Jody Armour, a professor at University of Southern California’s Gould School of Law.

Armour, who has expertise in police and racial profiling, called the movement “the power of democracy unleashed.”

“Black Lives Matter” has again been used as a rallying cry in the cases of two unarmed black men shot dead by police this week in Baton Rouge and Minneapolis, and organizers have begun mobilizing.

Angry protests have roiled the country since, and police chiefs and top prosecutors in big and small cities have been ousted.

In San Francisco, the police killing of 26-year-old Mario Woods in December sparked months of protests and demands for the ouster of police chief Greg Suhr. In May, San Francisco Mayor Ed Lee asked him to step down, saying tensions between police and people of color had “come into full view.”

In Chicago, two-term Cook County State’s Attorney Anita Alvarez lost her Democratic primary bid by a landslide in March, after activists dogged her campaign over her handling of the 2014 police killing of 17-year-old Laquan McDonald.

Her loss came just months after Chicago Mayor Rahm Emanuel ousted then-police superintendent Garry McCarthy, saying it was an “undeniable fact” that public trust in police had eroded. As evidence, he cited Black Lives Matter protests organized after a video of the killing was released.

The group has used demonstrations and acts of civil disobedience to pressure police chiefs and elected officials. At times their lead has been followed by more established groups such as the National Association for the Advancement of Colored People and local clergy, as was the case in Chicago.

Darrel Stephens, executive director of the Major Cities Chiefs Association, said local politicians were much more responsible for the string of departures and firings than protesters.

“I know from being involved in this work for around 50 years, that (since Ferguson) we’ve seen more of these political terminations than we’ve seen in years past,” he said.

Protesters on Thursday also gathered at the mansion of Minnesota Governor Mark Dayton in St. Paul, about 10 miles (15 km) southeast of where 32-year-old Philando Castile was shot by a police officer after a traffic stop on Wednesday.

Both of the killings were captured on video.

He said the attention has made police chiefs an easy scapegoat for politicians aiming to quell unrest.

Melina Abdullah, professor and chair of pan-African studies at California State University Los Angeles, said keeping the heat on elected officials has been critical to the movement’s success.

“With sustained pressure there, we can make sure there is a response,” said Abdullah, an organizer of the local Black Lives Matter chapter. “We know another murder is going to happen.”