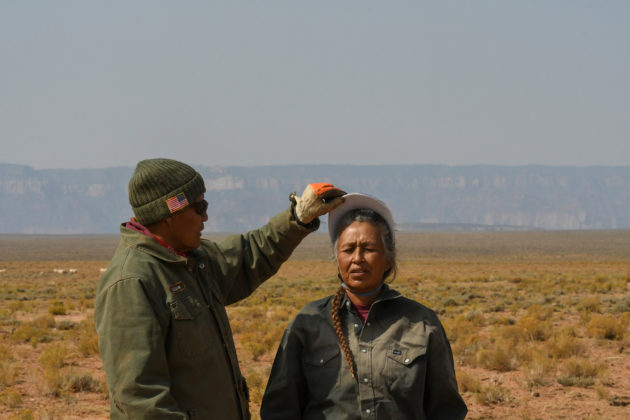 Leonard Sloan, 64, lifts a visor off of his wife Maybelle Sloan, 59, who are both from Navajo Nation, at their sheep camp in the Bodaway Chapter in the Navajo Nation in Gap, Arizona, U.S. September 17, 2020. REUTERS/Stephanie Keith

By Stephanie Keith and Andrew Hay

CEDAR RIDGE, Ariz. (Reuters) – Two decades into a severe drought on the Navajo reservation, the open range around Maybelle Sloan’s sheep farm stretches out in a brown expanse of earth and sagebrush.

A dry wind blows dust across the high-desert plateau, smoke from wildfires in Arizona and California shrouding the nearby rim of the Grand Canyon.

The summer monsoon rains have failed again, and stock ponds meant to collect rainwater for the hot summer months are dry.

With no ground water for her animals, Sloan, 59, fills an animal trough with water from a 1,200-gallon white plastic tank. She and her husband, Leonard, have to pay up to $300 to have the tank filled as her pickup truck has broken down. When it’s working, she hauls water herself every two days, spending $80 a week on fuel.

The cost of hauling water has made their ranch unprofitable.

The Navajo Nation – covering a 27,000 square mile area straddling the U.S. states of Arizona, New Mexico and Utah — competes with growing cities including Phoenix and Los Angeles for its water supply.

And as climate change dries out the U.S. West, that supply is becoming increasingly precarious.

In decades past, “we got rain every year around June, July, August,” said Leonard Sloan. The 64-year-old rancher pointed toward the dry ponds in the ground near a local butte named Missing Tooth Rock. “When we had that storm, there would be water and they would be full. And now due to global warming, we don’t get no rain, just a little.”

To keep their ranch alive the Sloans have to get water, which is free, from the sole livestock well in the area some 15 miles to the east.

They spend between $3,000 and $4,000 a year on hay to supplement their animals’ feed as the open range no longer produces enough grass to sustain them.

Maybelle has cut her sheep herd down to 24 head, and Leonard tells her to get rid of them and her 18 goats to focus on their 42 cattle, which bring more money at market.

But Maybelle bristles at the thought of giving up sheep herding learned from her mother, and grandmother before her. Maybelle’s mother, father and sister all died in April from coronavirus.

“I’m doing it for my parents,” Maybelle said, wiping tears away as she sat on the metal railing of a corral while her cattle licked salt blocks and drank water.

The Sloans remember grass growing as high as the belly of a horse as recently as the 1980’s.

But drought conditions on the reservation have become largely relentless since the mid-1990’s.

Annual average temperatures rose by 1.4 degrees Fahrenheit in the reservation’s Navajo County area over the 100 years to 2019, according to National Oceanic and Atmospheric Administration data.

The months of June to August this year were the driest on record in the area for the three-month period, according to drought monitoring data studied by climate scientist David Simeral of the Desert Research Institute in Nevada. Three of the five driest July-August rainy seasons in the area have occurred since the late 1990’s.

The warming trend has prompted desertification, with sand dunes now covering about a third of the reservation, according to the U.S. Geological Survey (USGS).

All but one of the reservation’s rivers have stopped running year-round, said Margaret Redsteer, a scientist at the University of Washington in Bothell.

“That’s the really tricky thing about droughts, and climate change is like that too,” Redsteer said. “It’s a gradual disaster.”

On paper, the Navajo Nation has extensive water rights based on the federal “reserved rights” doctrine which holds that Native American nations have rights to land and resources in treaties they signed with the United States.

In practice, the Navajos and other tribes were left out of many 20th century negotiations divvying up the West’s water.

There are signs some of the next generation are keeping up ranching traditions.

Some youths simply help their grandparents haul water each day from the sole well for livestock in the Bodaway-Gap area. Still others, including Maybelle’s children, send money from their work off the reservation to help fund their families’ ranches.