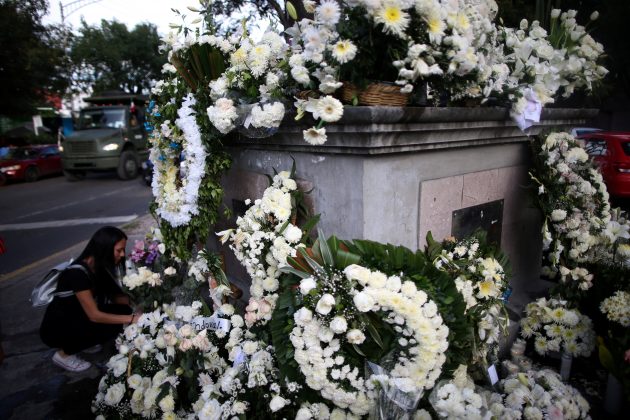 People put floral wreaths for the students of the Enrique Rebsamen school after an earthquake in Mexico city, Mexico September 22, 2017. REUTERS/Edgard Garrido

MEXICO CITY (Reuters) – A Mexico City school that collapsed in a powerful earthquake last week killing 19 children buckled under the heavy weight of floors added over the years with scant steel support, according to experts and witnesses.

The tragedy at the privately owned Enrique Rebsamen school in southern Mexico City, in which seven adults also died, has become a symbol of the devastation inflicted by the country’s 7.1 magnitude quake, the worst in a generation. At least 355 people died in the capital and surrounding states.

“The building was badly designed, poorly calculated and poorly constructed,” said Alfredo Perez, a 52-year old civil engineer who dashed to the school shortly after the Sept. 19 quake to help rescue efforts. “The reinforced concrete doesn’t comply with specifications in construction regulations.”

Alongside rescue workers, Perez said, he pulled bodies from the rubble. Then he sat in one of the undamaged classrooms and drew plans detailing potential design failures in the collapsed building.

Reuters showed those plans to six structural engineers along with Reuters’ photos of the ruined structure. They independently concluded that the structure’s columns lacked sufficient steel rebar to support all four floors and prevent them from snapping in such a powerful earthquake.

While the quantity of steel required under Mexico’s stringent post-1985 building code varies depending on the size of structure, all six engineers said the building’s columns were built with too little steel to withstand strong quakes.

Perez and another engineer specified that columns appeared to have less than half the required amount of steel reinforcement. They base their view on the number of vertical and horizontal steel rebar rods in the columns, which are visible in Reuters photos along with the measurements in Perez’s plans.

“It comes down to the lack of steel,” said Troy Morgan, a New York-based senior managing engineer at Exponent, an engineering consulting firm.

Since a 1985 quake toppled hundreds of buildings in Mexico City, planning officials developed a strict building code at the forefront of international standards for quake-proofing that raised the proportion of required steel reinforcement.

Reuters was unable to locate or contact the school’s owner and principal, Monica Garcia. Teachers, current and former students and their families all said she had been at the premises during the quake and survived.

Reuters was unable to identify the builder. A spokesman for the Tlalpan district where the school was located said property owners are not required to notify authorities of the builders or architects they used for modifications. The spokesman said the district had no record of the builder that worked on the new floors at the school. People living by the school said they did not know who had done the work.

The Mexico City urban development department did not respond to requests for comment on whether the inspectors who certified the school had proper licenses or any history of complaints.

Although the school was founded in 1983, before the new code took effect, the administrative building that buckled was expanded from two to four floors over the last decade or so, neighbors and former students said.

Photos published by Google Maps show the building had four floors as of 2009 with an expansion of the top floor by 2014 and a further expansion in 2016.

“It definitely did not comply with the post-1985 code,” said Eduardo Miranda, a civil and environmental engineering professor at Stanford who collected statistics on buildings that collapsed in Mexico’s 1985 earthquake, citing the code, photos and plans.

Construction permits released by local authorities dated in 1983 and 1984 authorized a four story structure at the school site. The top two floors were added much later, meaning the existing structure should have been brought up to modern standards, according to Mexico City’s construction code.

The engineers who studied the photos and plans said the existing building had not been visibly reinforced.

Luis Felipe Puente, coordinator of Mexico’s Civil Protection department, told Reuters that local officials, the construction company and the owner of the property could all be held accountable if any violations were discovered.

One inspector, Juan Apolinar Torales Iniesta, gave the buildings its most recent safety certificate in June according to documents filed with the local government, which released them publicly.

Torales did not respond to requests for comment sent to telephone numbers and emails listed in a government database. At Torales’ government-registered address, a man refused to identify himself and said the registered architectural engineer did not live there.

Claudia Sheinbaum, Tlalpan district mayor, filed a criminal complaint on Thursday accusing two prior attorneys for the district Alejandro Zepeda and Miguel Angel Guerrero of maliciously failing to enforce the law after discovering unpermitted construction between 2010 and 2014 on the upper floors.

“What we’ve found is truly outrageous,” she said, referring to a document dated Nov. 8, 2013 by the Tlalpan public works department that described demolition work on the upper floors causing structural damage to the building. Despite that document, which she made public and was reviewed by Reuters, the school was allowed to keep operating with a small fine, Sheinbaum said

Guerrero did not immediately respond to requests for comment sent to his email address. Zepeda did not respond to a message sent to his Facebook account.

All six engineers said the addition of two floors dangerously loaded down the building, given its lack of steel support.

“If it was kept at two levels, it would have not collapsed…it would not have caused so many deaths,” said Casey Hemmatyar, managing director at Pacific Structural and Forensic Engineers Group, a consultancy firm in Los Angeles.

Based on the position of the ruins, the school lurched as much as 18 feet (5.5 m) towards the street before collapsing, a sign of weak columns, said Geoffrey Hichborn, chief engineer at Building Forensics International, a concrete consulting firm in Anaheim, California.

Mexico City’s government has not completed its own analysis, and Sheinbaum said the rubble would be left in place for engineers to investigate.

Documents published by Sheinbaum on Tlalpan district’s website, including building inspection reports and closure orders from the district’s attorneys, show that officials ordered fourth-floor construction to be halted at several points between 2010 and 2014 because it lacked proper permits.

Sheinbaum’s complaint filed Thursday refers to these documents and others filed with the district to say the irregularities were never resolved.

“No evidence or documents exist that allow the conclusion that these irregularities were corrected,” the complaint said. Reuters was unable to independently confirm whether or not corrective measures were taken.