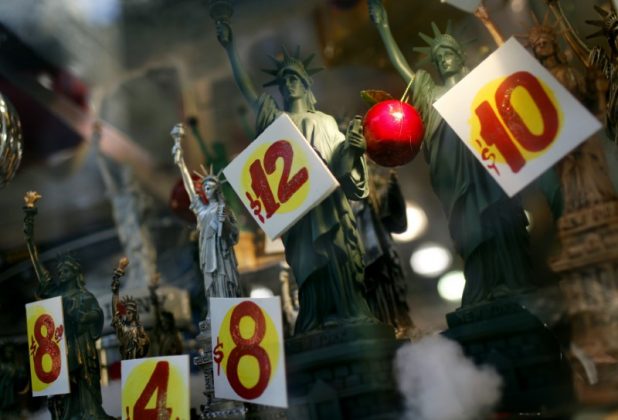 WASHINGTON (Reuters) – U.S. consumer prices were unchanged in June and retail sales fell for a second straight month, pointing to tame inflation and soft domestic demand that diminished prospects of a third interest rate increase from the Federal Reserve this year.

Still, the economy likely regained speed in the second quarter after a sluggish performance at the start of the year. Other data on Friday showed industrial production picked up in June, driven by a surge in oil and gas drilling.

“Today’s reports imply that the Fed will go very slowly normalizing rates, but it also means that businesses will have to really hustle to find ways to keep earnings growing strongly,” said Joel Naroff, chief economist at Naroff Economic Advisors in Holland, Pennsylvania.

The Labor Department said the unchanged reading in its Consumer Price Index came as the cost of gasoline and mobile phone services declined further. The CPI dropped 0.1 percent in May and the lack of a rebound in June could trouble Fed officials who have largely viewed the recent moderation in price pressures as transitory.

Policymakers are confronted with benign inflation and a tight labor market as they weigh a third rate hike and announcing plans to start reducing the central bank’s $4.2 trillion portfolio of Treasury bonds and mortgage-backed securities.

In the 12 months through June, the CPI increased 1.6 percent – the smallest gain since October 2016 – after rising 1.9 percent in May. The year-on-year CPI has been retreating since February, when it hit 2.7 percent, which was the biggest increase in five years.

The so-called core CPI, which strips out food and energy costs, edged up 0.1 percent in June, rising by the same margin for three straight months. The core CPI increased 1.7 percent year-on-year after a similar gain in May.

The Fed has a 2 percent inflation target and tracks a measure which is currently at 1.4 percent.

Financial markets were pricing in a 47 percent chance of a 25 basis point rate hike in December, down from 55 percent before the data, according to CME Group’s FedWatch program.

As a result, the dollar fell, briefly touching a 10-month low against a basket of currencies. Prices for U.S. government bonds rose and stocks on Wall Street edged higher.

Fed Chair Janet Yellen told lawmakers on Wednesday that the recent cool-off in inflation was partly the result of “a few unusual reductions in certain categories of prices” that would eventually drop out of the calculation.

There were also decreases in airline fares and prices for apparel, household furnishings, new motor vehicles, and used cars and trucks. But rental costs rose, with owners’ equivalent rent of primary residence increasing 0.3 percent after advancing 0.2 percent in May.

Sales at restaurants and bars, as well as at sporting goods and hobby stores fell. May’s retail sales were revised to show a 0.1 percent dip instead of the previously reported 0.3 percent drop. Retail sales rose 2.8 percent year-on-year in June.

Despite two straight months of decreasing retail sales, consumer spending likely gained steam in the second quarter after a helping to restrict economic growth to a 1.4 percent annualized rate in the first quarter. However, that could negatively impact third-quarter GDP.

“The weak trajectory of consumer spending at the end of second quarter adds some challenges to the third-quarter consumption outlook, which reinforces our view that growth will step down modestly in the current quarter,” said Michael Feroli, an economist at JPMorgan in New York.

That was supported by a third report showing a measure of consumer sentiment fell to a reading of 93.1 in early July from 95.1 in June. It has declined from a high of 98.5 in January.

The Atlanta Federal Reserve lowered its second-quarter growth estimate by two-tenths of a percentage point to a 2.4 percent rate following the inflation and retail sales data.

Still, growth in the second quarter likely got a lift from the industrial sector of the economy.

In a fourth report on Friday, the Fed said industrial production increased 0.4 percent in June amid robust gains in oil and gas drilling after nudging up 0.1 percent in May.

Industrial production increased at a 4.7 percent rate in the second quarter.