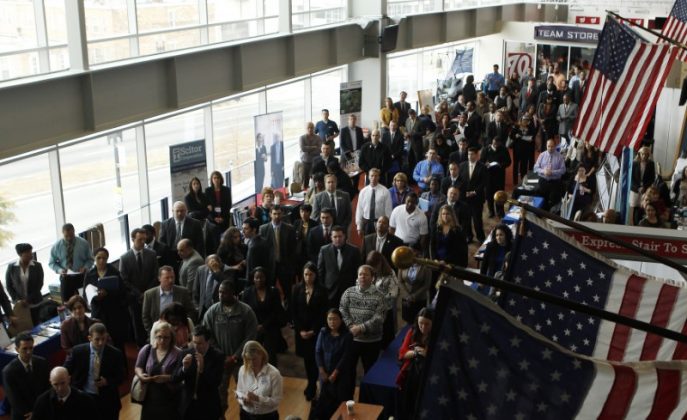 Job applicants listen to a presentation prior to the opening of a job fair for veterans and their spouses held by the U.S. Chamber of Commerce and the Washington Nationals baseball club at Nationals Park in Washington December 5, 2012. REUTERS/Gary Cameron

WASHINGTON (Reuters) – The number of Americans filing for unemployment benefits rose less than expected last week, pointing to a tightening labor market that is starting to spur faster wage growth.

Other data on Thursday showed import prices posting their largest gain in nearly five years in the 12 months through December, suggesting that inflation could soon push higher. Import prices are being driven by rising oil prices, but a strong dollar could limit some of the impact on inflation.

Initial claims for state unemployment benefits increased 10,000 to a seasonally adjusted 247,000 for the week ended Jan. 7, the Labor Department said. It was the 97th straight week that jobless claims remained below 300,000, a threshold associated with a healthy labor market. That is the longest stretch since 1970, when the labor market was much smaller.

“Jobless claims remain in a very constructive range and are still evidence of an environment in which turnover is low and employers are generally content to maintain and expand their payrolls,” said Jim Baird, chief investment officer at Plante Moran Financial Advisors in Kalamazoo, Michigan.

Economists had forecast first-time applications for jobless benefits rising to 255,000 in the latest week.

Jobless claims data tends to be volatile around the holiday season. The four-week moving average, considered a better measure of labor market trends as it irons out week-to-week volatility, fell 1,750 to 256,500 last week.

The number of Americans still receiving jobless benefits after an initial week of aid fell 29,000 to 2.09 million in the week ended Dec. 31. That was the first decline in the so-called continuing claims since November.

U.S. financial markets were little moved by the data amid disappointment over the lack of details regarding president-elect Donald Trump’s economic policy on Wednesday during his first press conference since his Nov. 8 election victory.

Stocks on Wall Street were trading lower, while prices for U.S. government debt rose. The dollar fell against a basket of currencies also as minutes from the European Central Bank’s last meeting revealed a few policymakers had not backed an extension of the ECB’s bond buying program.

During his election campaign Trump pledged to cut taxes, increase spending on infrastructure and relax regulations. While he has offered few details on these election promises, economists are hoping that the proposed fiscal stimulus would boost economic growth this year.

The stimulus would come against the backdrop of a labor market that is at or near full employment, with the unemployment rate near a nine-year low of 4.7 percent.

With tightening labor market conditions starting to push up wage growth, that could stoke inflation pressures and prompt the Federal Reserve to raise interest rates at a faster pace than currently envisaged.

The Fed raised its benchmark overnight interest rate last month by 25 basis points to a range of 0.50 percent to 0.75 percent. The U.S. central bank has forecast three rate hikes for this year. Average hourly earnings increased 2.9 percent in the 12 months through December, the largest gain since June 2009.

Import prices are rising as the drag from lower oil prices fades. Oil prices have risen above $50 per barrel.

The dollar rose 4.4 percent against the currencies of the United States’ main trading partners last year, with most of the gains coming in the wake of Trump’s victory.

“While the drag on import price inflation stemming from energy is fading, dollar headwinds have resurfaced,” said Sarah House an economist at Wells Fargo Securities in Charlotte, North Carolina.

“We expect the renewed strength in the dollar to remain a challenge for import price reflation in the coming months, but the rebound in energy prices should more than offset any drag.”