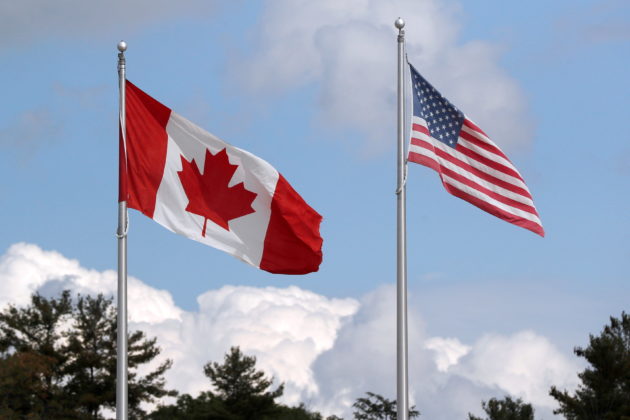 FILE PHOTO: A U.S. and a Canadian flag flutter at the Canada-United States border crossing at the Thousand Islands Bridge, which remains closed to non-essential traffic to combat the spread of the coronavirus disease (COVID-19) in Lansdowne, Ontario, Canada September 28, 2020. REUTERS/Lars Hagberg

OTTAWA (Reuters) – After Prime Minister Justin Trudeau held a cordial first meeting with U.S. President Joe Biden in February, marking an end to years of battles with the Trump administration, a relieved Canadian official said, “We feel we are off to the races here.”

But old trade disputes that flared up during the Trump years show no signs of fading.

The timing is awkward for Trudeau ahead of a likely election later this year, especially since his ruling center-left Liberals have traditionally enjoyed better relationships with the Democrats than the opposition Conservative Party.

“Canada’s economic relationship with the United States is breaking down rapidly,” said Candice Bergen, deputy Conservative leader, noting that “for months the Liberals have been telling us how much they agree with the Americans.”

The Trump era was exhausting for Canada, which sends 75% of its goods exports to the United States. At one point Trump called Trudeau “dishonest and weak” and threatened to tear up the North American Free Trade Agreement unless it could be renegotiated.

But the new-found cordial atmosphere has not blunted a dispute over U.S. allegations Canada is unfairly limiting imports of dairy products. Another contentious issue is Canadian softwood lumber exports, which U.S. producers have long complained are unfairly subsidized.

On lumber, “the United States has not been willing to reach an agreement; We are,” Natural Resources Minister Seamus O’Regan tersely told legislators last month.

Signs of trouble emerged early. Within hours of taking power, Biden revoked the permit needed to build the Keystone XL oil pipeline, killing an $8 billion project that would have brought Canadian crude to U.S. markets.

Canadian officials now want the White House to help solve another energy challenge in Michigan, where the governor wants to close a pipeline operated by Canada’s Enbridge Inc. The Biden team has declined to intervene.

Yet despite the recent unhappiness, there are big differences between the two U.S. administrations, Canadian officials say.

Biden, unlike Trump, is not threatening to scrap continental free trade. He has also not imposed tariffs on Canadian aluminum and steel on national security grounds.

“We can’t eliminate all the different issues that are important for the Americans. We have to deal with them one by one,” he told a Montreal business audience this month. “There is always going to be a bit of back and forth between our two nations.”

In private, however, Canadian officials are even blunter.

“The idea the Biden administration is bad for us on trade is nonsense,” said one senior source with direct knowledge of government thinking. “The Canada-U.S. trading relationship is largely open and free flowing.”

Chris Sands, head of the Canada Institute at the Washington-based Wilson Center, said Ottawa had been too optimistic about the potential for cooperation.

“I do think expectations ran ahead of the likely way that the Biden administration would unfold… most people thought something different was going to emerge,” he told Reuters.

The U.S. Trade Representative’s office did not directly address questions about increasing tensions.

“We have a close relationship with Canada and routinely collaborate on a range of topics,” said spokesman Adam Hodge.