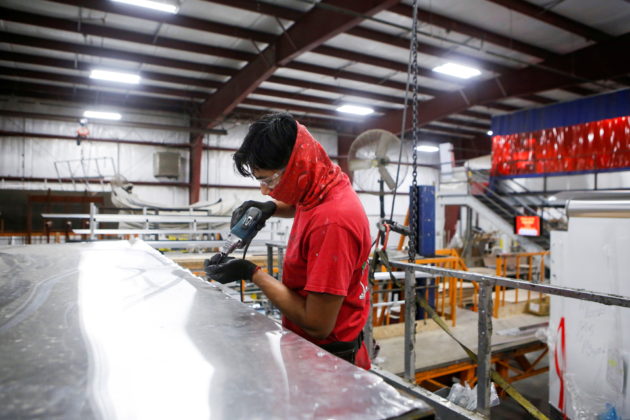 By Ann Saphir and Lucia Mutikani

SAN FRANCISCO/WASHINGTON (Reuters) – The big mystery with the government report Friday that’s expected to show nearly a million jobs gained for a second month in row won’t be why U.S. employers hired so many, but why they didn’t hire more.

As the economy revs up to meet the rapacious demand of tens of millions of newly vaccinated Americans, employers say they can’t fill their yawning need for labor.

Take Alex Washut. In January he mapped out hiring plans for his two breakfast and lunch eateries in Western Massachusetts and figured he’d need to hire 20 new cooks, servers, dishwashers and other staff by May. He’s doubled wages in some cases but has only managed to hire five; most of the time, he said, job candidates never even show for their interviews.

At the same time, the U.S. economy is down more than 8 million jobs since before the pandemic, and Federal Reserve officials say the true unemployment rate is closer to 10% than the 5.8% Friday’s report is expected to show.

What gives? It’s a long list, but here are some of the highlights:

* Enhanced unemployment benefits and other government aid are keeping workers on the sidelines, content to collect a check rather than work for a living.

* Parents – particularly mothers – can’t work because closures or shortened hours at schools and daycare keep them home to watch their kids.

* Stock market gains have given some older workers the cushion to retire.

* Some younger workers are finding jobs in new fields, shrinking the labor pool for the industries they left behind.

* Many employers need to fill jobs requiring skills that sidelined workers may not have.

What’s that all add up to? In a nutshell, this: A National Federation of Independent Business survey showed a record 42% of small businesses had job openings they could not fill in March.

Economists say that if employers need workers so badly, they would raise pay. So far that’s not happening. U.S. compensation rose faster than expected in the first quarter, but the boost came mostly from one-time bonuses to financial sector workers, and wasn’t broadly shared.

“The full sentence is ‘I can’t find workers at the wage I am willing to offer.’ Full stop,” ADP chief economist Nela Richardson said. “You can find workers.”

Over the next several months analysts will watch intently to see how the labor market adapts to the biggest changes since after World War Two, when millions of soldiers returned home and wartime assembly lines shut down. It may be the end of summer before there’s any real clarity.

“Ultimately as we get into September and we see schools reopening and some decline in unemployment insurance benefits we do expect for a lot of these labor scarcity issues to be alleviated,” Deutsche Bank economist Matthew Luzzetti said.

Or, as Cleveland Fed President Loretta Mester put it on Wednesday, as vaccinations rise and more schools return to in-person learning, “We’ll get to that better equilibrium in the labor market between supply and demand.”

It’s not unusual for it to take time for labor markets upended by a recession to work out kinks.

After the last downturn, Fed surveys showed employers grousing about worker shortages in 2012, when the unemployment rate was above 8%. When compensation began to rise in earnest several years later, workers flooded back to the labor market.

“What we saw was that labor supply generally showed up,” Fed Chair Jerome Powell said last month. “In other words, if you were worried about running out of workers, it seemed like we never did.”

This time, with the economy projected to grow at its fastest pace since 1984, the rebalancing may be quicker. The Fed will be watching what happens with wages, and prices.

BACK TO THE KITCHEN? NOPE

Some workers in industries hard hit by job losses, such as restaurants and retail, have moved sectors entirely, said Bill Spriggs, chief economist with the AFL-CIO and professor at Howard University.

Some people who had low-paying jobs before the pandemic were struggling to cover their bills even before the crisis and may be searching for more financial security, Spriggs said.

Richard Bunce, 33, was working as an executive chef in South Philadelphia when the pandemic hit. His eatery shut for six weeks, reopened for takeout, and then shut again.

Laid off, Bunce said he “decided I needed to do something different.” He went to coding school, graduated in December and had a job offer two weeks later. He’s since had a couple of offers to get back into the restaurant business. “I don’t plan on doing that,” he said.

Bunce’s gain is the restaurant industry’s loss. Washington-based restaurant operator Knead Hospitality is so desperate for workers it is offering hiring bonuses of up to $1,000 for servers, line cooks and bartenders.

Washut, the Massachusetts restaurateur, said he figures to entice people collecting unemployment benefits he would have to set starting hourly pay at $19, up from $15 now. That would mean bumping up wages even higher for existing staff or risk them feeling shortchanged. And to pay for all those raises, he’d have to jack up prices on his $12 plates of Caribbean jerk chicken hash and eggs. “And who will pay $20 for an order of hash?”

Jimmy Nigg, who runs the Monkey Barrel Bar in Denver, is in a similar boat. He often finds himself in the kitchen making $5.95 cheeseburgers or behind the bar serving $6 craft beer because he can’t find staff, though he now offers line cooks nearly $19 an hour.

By September, he said, people will be willing to take “$15 or $16 because they are so desperate.”