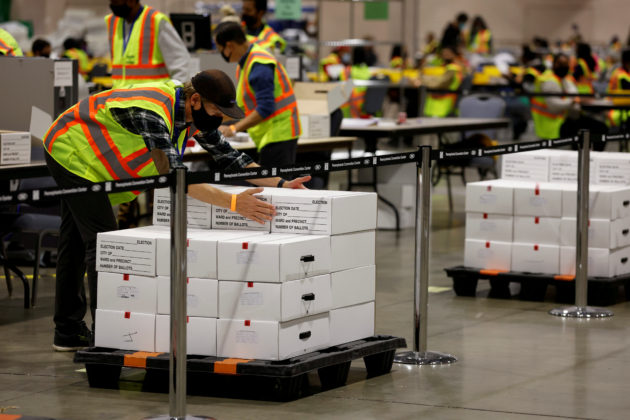 To capture the White House, a candidate must amass at least 270 votes in the Electoral College. Edison Research gave Biden a 253-214 lead over the incumbent.

Here is the state of play in the five states. The vote counts are supplied by Edison Research.

Biden has a lead of 13,558 votes, or a 0.2 percentage point margin, as of 2 p.m. ET (1900 GMT) Friday, with 96% of the estimated vote counted. Under Pennsylvania law, a recount is automatic if the margin of victory is less than or equal to 0.5 percentage point of the total vote.

In Philadelphia, the state’s largest city, about 40,000 ballots remained to be counted, the majority of them provisional and military ballots, according to Pennsylvania’s election commissioner, who said the final count could take several days.

Friday is the last day that Pennsylvania can accept mail-in ballots postmarked on or before Election Day.

Biden is ahead of Trump by 1,554 votes as of 2 p.m. ET (1900 GMT) Friday, with 99% of votes counted according to Edison. Trump needs both Pennsylvania and Georgia to win a second term.

Brad Raffensperger, Georgia’s secretary of state, said he expects the margin to be just a few thousand votes, which would trigger an automatic recount. A recount must wait until Georgia’s results are certified, expected on or before Nov. 20.

About 9,000 military and overseas ballots were still outstanding and could be accepted if they arrive on Friday as long as they were postmarked Tuesday or earlier.

Maricopa County, which includes heavily populated Phoenix, has 142,000 early ballots left to count, as well as some provisional ballots. Biden has a 3.2 percentage point lead in the county, with 92.2% of the estimated vote counted.

The majority of Maricopa’s votes could be tallied as soon as Saturday, said Megan Gilbertson, the communications director for the county’s elections department.

The state’s biggest county, Clark, which includes Las Vegas, has 63,000 ballots remaining to be counted. The next update of the vote count is expected at around 7 p.m. ET (0000 GMT) and the majority of mail-in ballots is expected to be counted by Sunday.

State officials have said a full result would not be known until next week. The state allows mail-in ballots postmarked by Tuesday to be counted if they are received by Nov. 12.