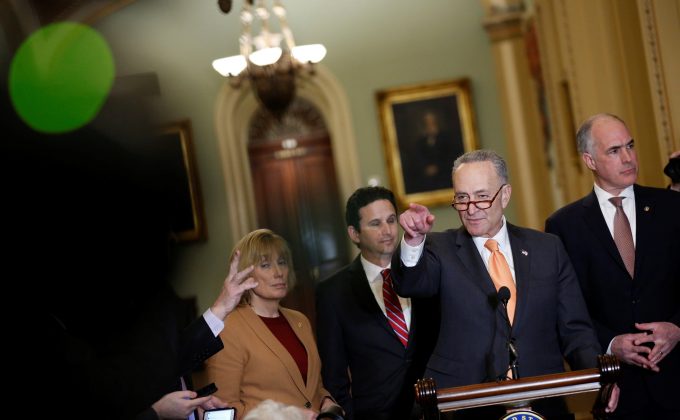 WASHINGTON (Reuters) – U.S. lawmakers are expected to unveil “a good, bipartisan deal” on Wednesday that would raise current limits on federal spending for two years, the White House said, as Congress seeks to end fights over spending that have plagued Washington for months.

But Nancy Pelosi, the House of Representatives’ Democratic leader, said she would not support such a deal, aimed at lifting some limits on government spending for two years, unless Republican Speaker Paul Ryan promised to advance legislation on immigration. Trump’s fellow Republicans control both chambers of Congress.

Over the past several months, congressional leaders have been negotiating a deal that would raise spending caps for the current fiscal year, which ends on Sept. 30, and the next one for both defense and non-defense programs.

A broad budget deal could ease the brinkmanship over spending that roils Washington so regularly that financial markets barely flinch anymore at the threat of a government shutdown.

“There’s some things that you give and take in a negotiation like this, and so I think this will be a good, bipartisan deal but we’re more excited about the defense spending,” Short said.

Aside from the planned longer-term deal, lawmakers were also trying to reach agreement by Thursday to avoid a shutdown and fund the government until March 23.

“We expect the government is not going to shut down this week,” Short said.

In a further sign of Congress’ inability to get basic work done, the House on Tuesday had to approve another stopgap bill to keep the federal government from shutting down.

Stopgap measures are needed when Congress fails to approve spending on time for a full fiscal year, something it has done only four of the past 40 years, according to congressional researchers.

The Senate was expected to take up the House stopgap legislation as Congress raced to get a finished bill for Trump to sign into law before government funding runs out on Thursday.

If that fails, the U.S. government would experience its second shutdown this year, after a partisan standoff over U.S. immigration policy led to a three-day partial shutdown last month.

Immigration again emerged as a possible point of contention in budget talks when Democrat Pelosi said she would oppose a two-year deal unless the Republican Ryan promised to advance legislation to protect hundreds of thousands of young adult immigrants, known as “Dreamers,” brought to the United States illegally as children.

Republicans are eager to keep spending and immigration separate. But Trump threatened on Tuesday to upend budget talks by saying he would welcome a government shutdown if Congress were not able to agree to changes in immigration law that he said would prevent criminals from entering the country.

January’s shutdown came after Democrats sought to have a spending bill include protections for the Dreamers that Trump has rescinded effective in March.

Congress must also raise the federal debt ceiling or face defaulting on the government’s bills, and several Republican lawmakers said the matter would be part of Senate budget talks. The U.S. Treasury is expected to run out of borrowing options by late March.

(Additional reporting by Susan Heavey; Editing by Will Dunham)