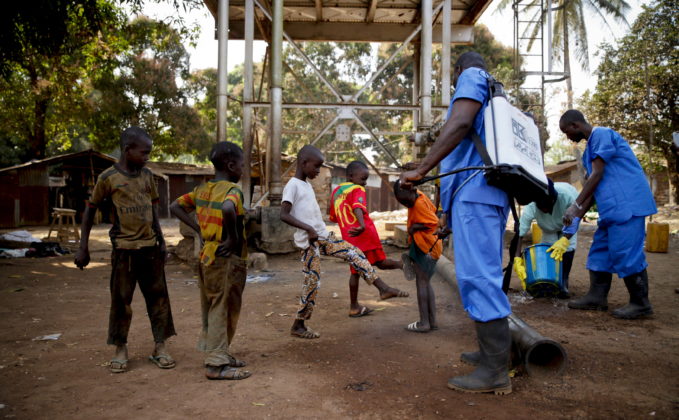 FILE PHOTO: Children come forward to get their feet disinfected after a Red Cross worker explained that they are spraying bleach, and not spraying the village with the Ebola virus, in Forecariah January 30, 2015, REUTERS/Misha Hussain

GENEVA (Reuters) – Guinea’s current Ebola outbreak is likely to have been sparked by a latent infection in the human population from the last outbreak rather than from the virus jumping the species barrier again, a World Health Organization official said on Friday.

At least 18 cases of Ebola have been reported in Guinea’s first resurgence of the virus since the 2013-16 outbreak which was the worst in history and spread through West Africa, killing thousands.

The WHO’s top emergencies official Mike Ryan told a briefing the preliminary finding based on initial genetic sequencing was “remarkable” because of the period of time the virus appeared to have lingered on. However, he urged further research.

“This (outbreak) is unlikely based on genetic sequencing to be linked to a fresh zoonotic reservoir and much more likely to be linked to persistence or latency of infection in a human subject,” he said. “We are not dealing, as far as we understand right now, with a breach of the species barrier,” he added.

A second WHO official at the same briefing said it was too early to draw conclusions on the source of the outbreak.

Ebola, one of the deadliest viruses known to humanity, can be transmitted to humans from bats or monkeys. It can live on in parts of the body of survivors otherwise in good health such as the eyes, breasts and testicles and sometimes still be transmitted.

Ryan said the preliminary findings underscored the need not to stigmatize Ebola survivors and give them the follow-up and support they require.