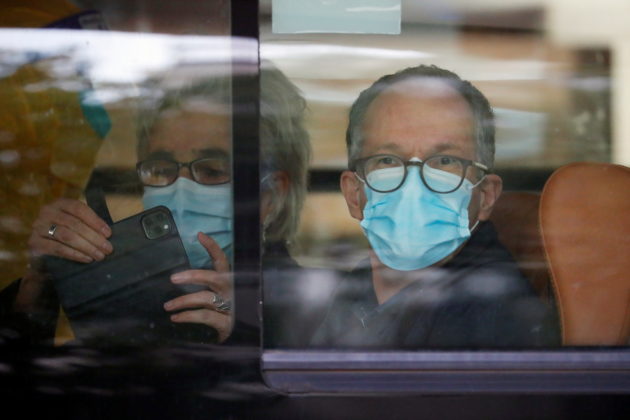 Peter Ben Embarek and Marion Koopmans, members of the World Health Organisation (WHO) team tasked with investigating the origins of the coronavirus disease (COVID-19) pandemic, sit on a bus as they leave their quarantine hotel in Wuhan, Hubei province, China January 28, 2021. REUTERS/Thomas Peter

WUHAN, China (Reuters) – A World Health Organization-led team investigating the origins of the COVID-19 pandemic left its quarantine hotel in Wuhan on Thursday to begin field work, two weeks after arriving in the Chinese city where the virus emerged in late 2019.

The mission has been plagued by delays, concern over access and bickering between China and the United States, which has accused China of hiding the extent of the initial outbreak and criticized the terms of the visit, under which Chinese experts conducted the first phase of research.

“I asked that the international scientists get the support, access & data needed, and the chance to engage fully with their Chinese counterparts.”

The WHO has not provided details of the mission’s itinerary, although team leader Peter Ben Embarek said in November that the group would likely go to the Huanan Seafood Wholesale Market, where the first known cluster of cases was traced.

The team, made up of independent experts, is due to remain for two more weeks in China, which has used stringent measures, including drastically curtailing international arrivals, to curb the spread of the coronavirus. China has been battling a series of local outbreaks over the past month.

“During the second 14 days, the team will be able to go out under strict medical supervision, continuous testing and the restrictive measures,” Hans Kluge, the WHO’s European regional director, told a news conference from Copenhagen on Thursday.

He said the first two weeks had been productive.

“The team members have been prepared by counterparts in China in different fields, there have been, every day, many, many hours of presentations and exchange of data,” he said.

After leaving their quarantine hotel shortly after 3 p.m. (0700 GMT) without speaking to journalists, team members boarded a bus to a lakeside hotel, where a portion of the building and grounds were cordoned off.

Several team members described long work days during their quarantine, and relief at being able to leave their rooms.

“Slightly sad to say goodbye to my ‘gym’ & my ‘office’ where I’ve been holed up for last 2 wks!!,” team member Peter Daszak said on Twitter, along with photos of exercise equipment and a desk in his hotel room.

The team members’ luggage, loaded onto the bus by workers in protective suits, included yoga mats and what appeared to be a guitar case.

The WHO has sought to manage expectations for the investigation.

“There are no guarantees of answers,” WHO emergencies chief Mike Ryan told reporters this month. “It is a difficult task to fully establish the origins and sometimes it can take two or three or four attempts to be able to do that in different settings.”

“All these activities must be in accordance with the principle of tracking the origin scientifically and with the ultimate goal of preventing future risks and protecting the safety and health of the people,” ministry spokesman Zhao Lijian told a regular briefing on Thursday.

The origin of COVID-19 has been highly politicized.

The investigating team had been set to arrive in Wuhan earlier in January, and China’s delay of their visit drew rare public criticism from the head of the WHO, which former U.S. President Donald Trump accused of being “China-centric” early in the outbreak.

China has been pushing a narrative that the virus existed abroad before it was discovered in Wuhan, with state media citing the presence of the virus on imported frozen food packaging and scientific papers saying it had been circulating in Europe in 2019.

China’s foreign ministry has also hinted on several occasions that the sudden closure of a U.S. army laboratory at Fort Detrick in Maryland in July 2019 was linked to the pandemic.

Wuhan resident Tu Zhengwang, 28, said it was not certain that the virus had originated in the city.

“It could be other places,” he said. “But if you find the origin, whether it is in Wuhan or other places, you could prevent similar incidents from happening.”