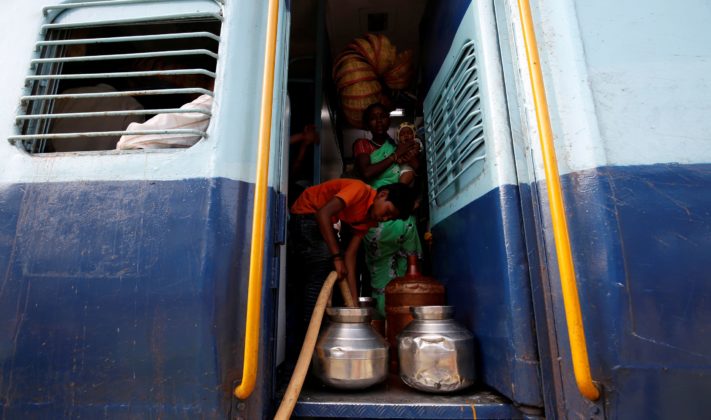 MUKUNDWADI, India (Reuters) – As their classmates set off to play after school each day, nine-year-old Sakshi Garud and her neighbor Siddharth Dhage, 10, are among a small group of children who take a 14-km (9-mile) return train journey from their village in India to fetch water.

Their families are some of the poorest in the hamlet of Mukundwadi, in the western state of Maharashtra, a village that has suffered back-to-back droughts.

India’s monsoons have brought abundant rain and even floods in many parts of the country, but rainfall in the region around Mukundwadi has been 14% below average this year and aquifers and borewells are dry.

“I don’t like to spend time bringing water, but I don’t have a choice,” Dhage said.

“This is my daily routine,” said Garud. Their cramped shanty homes are just 200 meters (220 yards) from the train station. “After coming from school, I don’t get time to play. I need to get water first.”

They are not alone. Millions of Indians do not have secure water supplies, according to the UK-based charity, WaterAid. It says 12% of Indians, or about 163 million people, do not have access to clean water near their homes – the biggest proportion of any country.

Recognizing the issue, Indian Prime Minister Narendra Modi has promised to spend more than 3.5 trillion rupees ($49 billion) to bring piped water to every Indian household by 2024.

More than 100 families in Garud and Dhage’s neighborhood do not have access to piped water and many depend on private water suppliers, who charge up to 3,000 rupees ($42) for a 5,000-litre tanker during summer months.

But private water supply is something Garud and Dhage’s parents say they can not afford.

“Nowadays, I don’t get enough money to buy groceries. I can’t buy water from private suppliers,” said Dhage’s father, Rahul, a construction worker. “I am not getting work every day.” 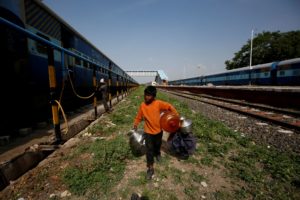 The children take the train daily to fetch water from the nearby city of Aurangabad.

The train is often overcrowded, so a group of small children jostling to get on board with pitchers to fill with water is not always welcome.

“Some people help me, sometimes they complain to railway officials for putting pitchers near the door. If we don’t put them near the door, we can not take them out quickly when the train stops,” Dhage said.

Garud’s grandmother Sitabai Kamble and an elderly neighbor help occasionally by pushing them on board in the face of irritable passengers.

“Sometimes they kick the pitchers away, they grumble,” Kamble said.

When the train pulls into Aurangabad thirty minutes later, they scramble to fill the pitchers at nearby water pipes. Garud can’t reach the tap, so she relies on her taller sister, Aaysha, 14, and grandmother.

Others, like Anjali Gaikwad, 14, and her sisters, also board the train every few days to collect water and wash clothes.

Their neighbor Prakash Nagre often tags along with soap and shampoo. “There’s no water to bathe at home,” he says.

When the train returns them to Mukundwadi, they have just under a minute to disembark. At times, Dhage’s mother, Jyoti, is waiting at the station to help.

“I’m careful, but sometimes pitchers fall off the door in the melee and our work is wasted,” she said, holding her infant in one arm and a pitcher in the other. “I can’t leave my daughter at home alone so I have to take her along.”