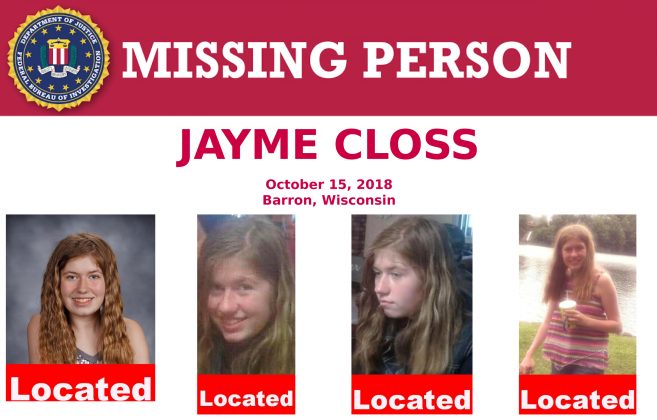 A U.S. Federal Bureau of Investigation (FBI) missing person poster shows Jayme Closs, a 13-year-old Wisconsin girl, missing since her parents were discovered fatally shot three months ago, has been located in Gordon, Wisconsin, U.S. as seen in this poster provided January 11, 2019. FBI/Handout via Reuters

By Gabriella Borter and Joseph Ax

(Reuters) – A 21-year-old Wisconsin man was charged on Friday with holding a 13-year-old girl captive for three months after murdering her parents, one day after the teen managed to escape and was discovered by a woman walking her dog. 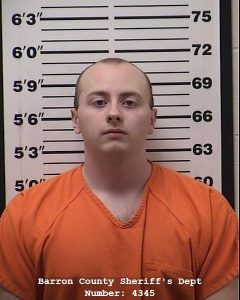 Thousands of volunteers and hundreds of law enforcement officers had searched around the clock around the small town of Barron after Jayme Closs’ parents were found shot dead in their home, the front door open and the girl gone.

Relying on what Barron County Sheriff Chris Fitzgerald called “the will of a kid to survive,” a disheveled Closs escaped a house in the tiny town of Gordon where she had been held captive, about 60 miles (100 km) north of Barron, and found a woman with her dog on Thursday afternoon.

The woman and Closs hurried to a neighbor’s house on Thursday to call authorities.

“This is Jayme Closs!” the woman said when the neighbor opened the door, according to the Star Tribune of Minneapolis. “Call 911!”

Both the woman and the neighbor recognized the teen immediately due to the enormous public campaign following her disappearance, Fitzgerald said.

Less than 15 minutes later, Jake Patterson, 21, was in custody, after police pulled over his vehicle, based on Closs’ description.

Patterson, an unemployed resident of Gordon, has been charged with kidnapping and with murdering James and Denise Closs, whose bodies were discovered on Oct. 15.

He was being held in the Barron County jail, and it was not yet clear whether he had a lawyer.

More than 200 law enforcement officials were on the ground day and night following Closs’ disappearance, sifting through thousands of tips but finding little to go on.

The search that stretched across cornfields and wooded areas drew 1,500 volunteers, nearly half as many people as the entire 3,400-person population of Barron, which sits about 90 miles (145 km) northeast of Minneapolis.

Hundreds of locals had attended a Christmas tree-lighting ceremony at Riverview Middle School, which Closs attended, in her honor last month. The “tree of hope” was decorated with messages and lighted in blue, Closs’ favorite color, and green to symbolize missing child awareness, the Star Tribune reported.

Closs was speaking to investigators on Friday after spending a night in the hospital for evaluation. Authorities did not offer any details about the conditions of her captivity or how she had managed to escape.

She was due to be reunited with her extended family later on Friday.

Authorities have released few details about Patterson, who has no previous criminal record in Wisconsin, saying they were unsure whether he had known Closs.

Attempts to reach Patterson’s relatives and neighbors on Friday were unsuccessful.

The Milwaukee Journal Sentinel, citing neighbors, reported that Patterson had been raised in Gordon. Police said Patterson had ties to Barron but did not elaborate.

The president of the Jennie-O Turkey store in Barron, where James and Denise Closs had worked for decades, said Patterson had been an employee for a single day three years ago. He quit the next day, saying he was moving, Steve Lykken said.

“We are still mourning the loss of longtime Jennie-O family members Jim and Denise, but our entire team is celebrating with the community, and the world, that Jayme has been found,” Lykken said.

The superintendent of the local school district, Jean Serum, said Patterson was a nice kid who was a member of his high school’s quiz bowl team. He graduated in 2015.

About 350 people under the age of 21 are kidnapped by strangers in the United States each year, according to FBI data.

Closs is not the first kidnapping victim to survive months in captivity.

Elizabeth Smart, who was held captive for nine months as a teenager after her 2002 abduction in Utah, posted a photo of Closs on Instagram, praising the “miracle” that she had been found.

“No matter what may unfold in her story let’s all try to remember that this young woman has SURVIVED and whatever other details may surface the most important will still remain that she is alive,” Smart wrote.