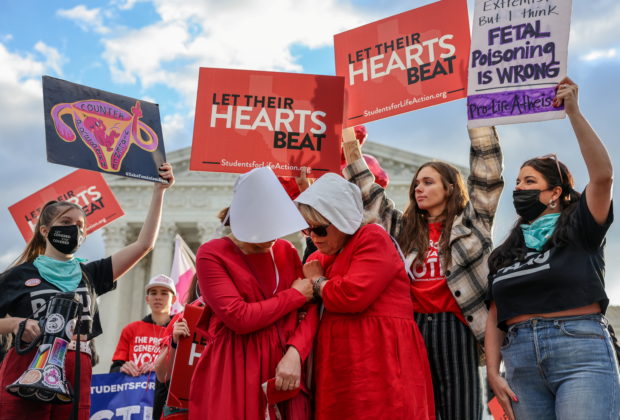 Women dressed as handmaids demonstrate in front of anti-abortion protestors outside the United States Supreme Court as the court hears arguments over a challenge to a Texas law that bans abortion after six weeks in Washington, U.S., November 1, 2021. REUTERS/Evelyn Hockstein

WASHINGTON (Reuters) – Shortly before the U.S. Supreme Court began heard arguments in a major abortion dispute out of Texas, a group of demonstrators who oppose abortion joined together outside the stately white marble neoclassical building to pray for the nine justices, listing each one by name.

Hundreds of people in support and opposition to a restrictive Texas abortion law gathered on Monday outside the courthouse on a mild autumn day in the U.S. capital. The justices heard arguments in challenges by President Joe Biden’s administration and abortion providers to the measure, which imposes a near-total abortion ban – prohibiting it after six weeks of pregnancy – and empowers private citizens enforce it.

Some of the law’s supporters cast the debate in religious terms.

The Reverend Patrick Mahoney, chief strategy officer for the anti-abortion group Stanton Public Policy Center, said, “Our strength is local. You can go to every community in the country right now and find grandmas in church basements knitting baby booties or doing bake sales. There’s this collective energy bubbling in our movement right now.”

Regarding the law’s private-enforcement mechanism, Mahoney said, “Is that the way I would have gone? Probably not. But it’s saving innocent lives. Overall I think it’s innovative and creative.”

The law puts enforcement in the hands of private citizens, empowering them to sue anyone who performs or assists a woman in getting an abortion after cardiac activity is detected in the embryo. Individual citizens can be awarded a minimum of $10,000 in successful lawsuits.

Julia Deluce, a coordinator with the group Students for Life, said she was advocating for the rights of “pre-born children,” adding, “They are human. They are part of our species. And they deserve our protection.”

Abortion rights demonstrators voiced alarm over the Texas law, which bans abortion at a point in time when many women do not yet realize they are pregnant. Abortion was legalized nationwide in the Supreme Court’s Roe. v. Wade decision. A series of restrictive Republican-backed abortion laws have been passed by states in recent years.

Washington resident Martha Dickey said she has been advocating for abortion rights since the 1970s.

“I found out what happened in Texas and I was really upset,” Dickey said. “… It stops the chance for a woman to be free to decide what happens to her own body.”

Amy Hagstrom Miller, founder of the Whole Women’s Health Clinic abortion provider that challenged the Texas law, said, “A ban like this doesn’t change the fact that people need abortions. It just changes the kind of abortions they can have.” She said she hopes the justices understand the impact of their decisions “on real people’s lives.”

(Writing by Jan Wolfe; Editing by Will Dunham)