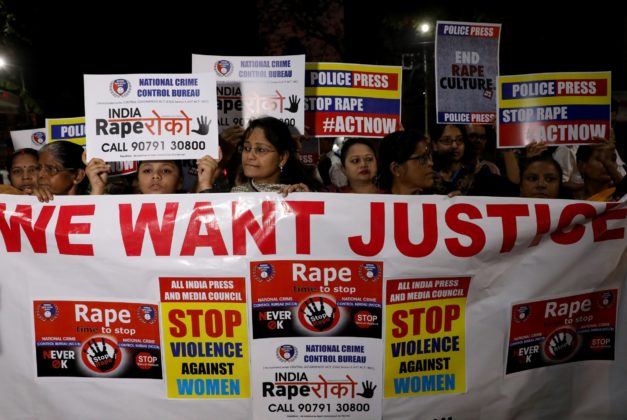 NEW DELHI (Thomson Reuters Foundation) – How can women reclaim the streets when they fear venturing out alone?

That was the challenge faced by the organisers of a street festival in New Delhi held to encourage Indian women to reclaim public spaces this week, as the country reeled from the latest gang rape and murder to hit the headlines.

“It seemed that most women came with their families, male friends or partners,” said Kiran, a police inspector who goes by one name, of the Step Out At Night festival organised by the city authorities on Thursday night.

“We hoped women would come without fear … but maybe this needs to be done more often to make them feel safe enough to do so,” she told the Thomson Reuters Foundation on Friday.

India has a grim record of sexual violence against women, with an average of some 90 rapes reported each day in 2017, according to latest federal data.

Thursday’s event came amid angry protests over the gang-rape and murder of a 27-year-old veterinarian near the southern city of Hyderabad last week.

Four suspects were shot dead during a reconstruction of the crime early on Friday by police who said they had tried to seize weapons. the killings drewing praise from many on social media but raised concerns over due process.

India strengthened its laws on sexual violence against women after the 2012 gang rape and murder of a woman on a Delhi bus that led to an outpouring of anger.

But critics say enforcement remains weak. On Thursday, a rape victim was set alight by a gang of men as she made her way to court.

In Delhi, dubbed India’s “rape capital” due to high levels of sexual violence, hundreds of women turned out for the festival, which included music and dance performances and gender equality themed games including snakes and ladders.

One female lawmaker tweeted a photo from the festival which showed her eating street food with a small group of women and throngs of men in the background.

Nishtha Gupta, a 22-year-old Delhi University student who attended, said she had asked her brother to accompany her “because my parents feel better knowing he’ll be with me”.

“The idea behind the festival is great … to have more women be visible and present in public spaces, but that’s not going to happen overnight,” she said.

Kalpana Viswanath, co-founder of an app that provides safety-related information, said the festival was a positive first step for women to assert their right to public spaces.

“As long as there are more women in public spaces, it will be safer just by virtue of there being more women,” said Viswanath, whose app, Safetipin, was a co-organiser.