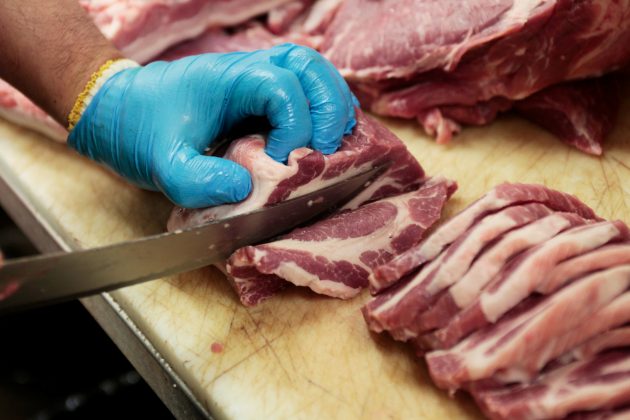 FILE PHOTO: Canadian pork shoulders are being prepped on a butcher's counter at North Hill Meats in Toronto, Ontario, Canada on May 10, 2017. Picture taken on May 10, 2017. REUTERS/Hyungwon Kang/File Photo

ROME (Reuters) – Global food prices rose in May from the month before after three months of decline, and the world’s food import bill is set to jump in 2017, the United Nations food agency said on Thursday.

Rising shipping costs and larger import volumes are due to push the cost of importing food globally to more than $1.3 trillion in 2017, FAO said.

This would be a 10.6 percent rise over 2016’s import bill, despite broad stability in markets buoyed by ample supplies of wheat and maize and higher production of oilseed products.

Poor countries that rely on imports to cover their food needs, and part of sub-Saharan Africa are on course for an even faster rise in their import costs as they buy in more meat, sugar, dairy and oilseed products.

All food categories except fish are due to add to rising import bills, as robust growth in aquaculture in many developing countries increasingly manages to meet domestic demand.

FAO’s food price index, which measures monthly changes for a basket of cereals, oilseeds, dairy products, meat and sugar, averaged 172.6 points in May, up 2.2 percent from April.

FAO trimmed its forecast for global cereals output in the 2017-18 season to 2.594 billion tonnes, down 0.5 percent year-on-year. Global wheat production is expected to decline 2.2 percent after a record harvest last year.