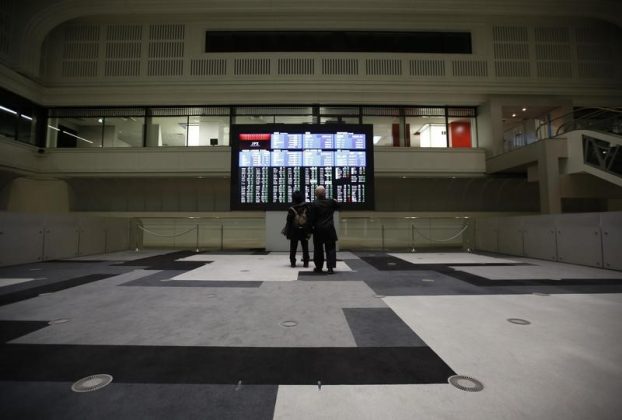 LONDON (Reuters) – Global stocks paused near record highs as worries over China’s banking system provided an excuse for investors to lock in some profits. The dollar was set for its best week of the year on bets the Federal Reserve will raise U.S. interest rates in June.

A dip on Wall Street overnight on signs of weak consumer spending and waning enthusiasm over the recovery in European corporate earnings has put MSCI’s gauge of world stock markets <.MIWD00000PUS> on track for its first weekly loss in four.

The index trades at now trades at more than 16 times forward earnings, according to Thomson Reuters data, and above its long-term average of 15.6 times.

U.S. stock futures <ESc1> were down another 0.2 percent on Friday.

“We’ve had a nervous twitch about China, over this week,” said Sean Darby, chief global equity strategist at Jefferies. “We’ve had a bit more of a regulatory overhang coming through in the financial system.”

With corporate earnings seasons in the U.S. and Europe drawing to a close investors, focus is likely to shift back to central banks, particularly in the United States, where inflation pressures are growing.

Combined with a tightening labor market, firming inflation backs market expectations that the Federal Reserve will raise interest rates at its meeting next month. The central bank has forecast two more increases this year after raising rates a quarter of a point in March.

The dollar index, which tracks the currency against a basket of six major rivals, was flat on the day at 99.622 <.DXY>, but was up 1 percent for the week.

Sterling was steady on the day at $1.2886 <GBP=> after dropping to a one-week low on Thursday following the Bank of England’s decision to keep interest rates unchanged. Policymakers indicated that rates were unlikely to rise until late 2019.

In Europe, stock markets steadied this week. Company profits are expected to grow 20 percent in the first quarter, the best corporate results in a decade, according to Morgan Stanley.

Their outperformance this year against global peers remains intact, with the benchmark’s <.STOXX> 10 percent gains outpacing the 7 percent rise on the S&P 500 <.SPX>.

“European stocks are still in the sweet spot of basking in the removal of political risk in Europe for the time being, though it is somewhat ironic that we could see a modest decline on the week as investors take stock,” said Michael Hewson, chief markets analyst at CMC Markets.

European equity funds pulled in a record $6.1 billion in inflows in the week to May 10, according to data from EPFR, with centrist Emmanuel Macron’s win in the French presidential election seen as a trigger.

Concerns over valuations are beginning to emerge. Credit Suisse strategists cut their rating on Spain, the euro zone’s top performing market for the year, to “underperform,” saying the strong earnings and economic momentum was moderating.

At the same time, the collapse in volatility across asset classes to multi-year or record lows, is tempting more investors into making bets that markets will remain calm given the brighter outlook for global growth.

Yields for the euro zone’s weaker borrowers, such as Italy, Portugal and Spain, were all also 1 to 3 basis points lower as investors awaited announcements of the volumes for expected bond sales next week by France and Spain.

Oil prices held recent gains as traders expected OPEC-led production cuts to extend beyond the middle of this year and as U.S. crude inventories fell to their lowest levels since February.