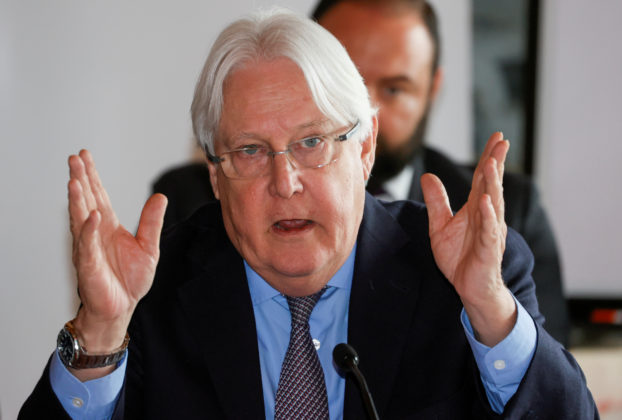 FILE PHOTO: Martin Griffiths, United Nations Special Envoy for Yemen, speaks as he attends the closing plenary of the fourth meeting of the Supervisory Committee on the Implementation of the Prisoners' Exchange Agreement in Yemen, in Glion, Switzerland, September 27, 2020. REUTERS/Denis Balibouse/File Photo

NEW YORK (Reuters) – A massive famine could wipe out a new opportunity, created by renewed U.S. engagement, to end the war in Yemen, top U.N. officials told the Security Council on Thursday.

U.N. Yemen mediator Martin Griffiths also called for a stop to an offensive by the Houthi movement on the government-held city of Marib, warning “the quest for territorial gain by force threatens all of the prospects of the peace process.”

U.S. President Joe Biden has made ending the conflict in Yemen a priority since taking office last month, appointing a special envoy and ending U.S. support for offensive operations by Saudi Arabia in neighboring Yemen.

“International support for ending the conflict is indispensable, and this offers us a new opportunity to reopen space for a negotiated solution,” Griffiths told the 15-member Security Council.

However, U.N. aid chief Mark Lowcock then warned: “There’s an important opportunity right now to help Yemen move towards lasting peace … but that opportunity will disappear, it will be wasted, if Yemen tips into a massive famine.”

The United Nations describes Yemen as the world’s largest humanitarian crisis, with 80% of the people in need of help.

A Saudi-led military coalition intervened in Yemen in 2015, backing government forces fighting the Iran-aligned Houthis. The more than six-year-long conflict is widely seen as a proxy conflict between Saudi Arabia and Iran.

Griffiths visited Tehran this month for the first time since becoming the U.N. envoy three years ago. He made no reference to his visit during his public Security Council statement.

He said the warring parties needed to immediately agree to a nationwide ceasefire, allow the unhindered flow of fuel and other commodities into Hodeidah port and permit international commercial traffic to use Sanaa airport. Griffiths said these issues had been discussed regularly for the past year.

“What is needed is simply and fundamentally the political will to end this conflict. We know need a decision,” he said.

Lowcock said some $4 billion was needed in 2021 to fund humanitarian operations as “Yemen is speeding towards the worst famine the world has seen in decades.” U.N. Secretary-General Antonio Guterres, Switzerland and Sweden plan to convene a pledging conference on March 1 to raise funds for Yemen.

When famine loomed in 2019, Lowcock said it was averted after the United Nations received about 90 percent of the $4 billion it requested. But last year the world body only received about $1.9 billion, about half of what it needed.

Lowcock said some 16 million people in Yemen were going hungry and 5 million of those people are “just one step away from famine.”

Some 400,000 children under the age of 5 are severely malnourished, he said. “Those children are in their last weeks and months,” he warned. “They are starving to death.”