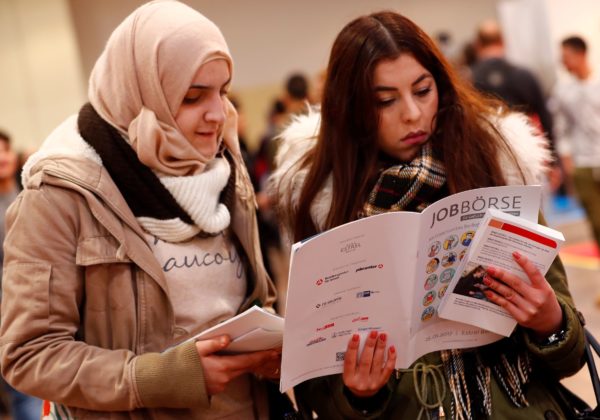 Geneva (Thomson Reuters Foundation) – In the 25 years since she was forced to leave her homeland, Congolese refugee Jacqueline Zandamela has built up her own fashion business and raised four children alone after she was widowed in 2001.

It has not been easy.

A housewife until she fled conflict in what is now the Democratic Republic of Congo for Mozambique, Zandamela first had to learn Portuguese, then go through the long, bureaucratic process of applying for permission to work.

“It was just another reality. Hard. Far from my family,” the 52-year-old told the Thomson Reuters Foundation on Wednesday on the sidelines of a United Nations conference on refugees.

“When I started to support my family through sewing, I hadn’t really thought of setting up a fashion studio.

“But because of the demand there was for my clothes, I took on some Mozambicans, and now we have 10 industrial sewing machines and four domestic ones and I work with 11 people.”

Finding work is not easy for any refugee, but women say they face particular challenges in accessing jobs, from sexism to the burden of caring for children and elderly relatives.

Many come from cultures in which women traditionally have not gone out to work, a problem compounded by issues such as domestic violence and child marriage, which disproportionately affect refugees as they grapple with poverty and trauma.

These range from laws that stop women entering certain industries to a failure to mandate equal pay for equal work in many countries that host high numbers of refugees. Some also restrict women’s right to work after marriage or childbirth.

Even in Germany, often cited as a model system, just 6% of refugee women work, compared to 53% of local women, according to the IRC.

Anila Noor, a Pakistani refugee in the Netherlands who campaigns for the rights of refugee women, said that for many, even the idea of going out to work was difficult.

“My mother thought I’d be married and that’s it. And then in Europe they suddenly ask, ‘what do you want to do?’. This is a new question for me,” she said.

“Every time, someone else is deciding for me, and now you’re asking what I want to do?”

IRC President David Miliband said the significant social and economic gains to be had from bringing more refugee women into the workforce meant it was essential to overcome those barriers.

“It’s not good enough just to say there are cultural barriers to refugees working,” he said while in Geneva for the Global Refugee Forum, a two-day conference of political, business and humanitarian leaders.

“It’s really important that we take advantage both of the traditional jobs, where you’ve got an employer, but also self-employment, home working, flexible working, and offer real opportunities to turn the gig economy into a lifeline for refugees.”

One of the key aims of this week’s U.N. gathering is to enable the more than 25 million people now living as refugees around the world to be more self-sufficient.

Dominique Hyde, director of external relations for the U.N. refugee agency, said women refugees were often the sole providers for their families.

To help them help themselves, host countries should be “providing shelter, providing education for the children so that they don’t need to be worrying about that”, she said, adding that there was a need for language and skills training.

With the average refugee now staying outside their homeland for more than a decade, aid agencies say more and more will need such assistance.

Today, with all her four children grown up and either in work or higher education, Zandamela combines running a successful fashion business with helping other refugee women navigate the challenges she once faced.

“There are refugees who come to me and I help them with translation. When they come (to Mozambique) they don’t know the language,” she said.

“And when they come to me I tell them, you mustn’t just sit back, you have to fight.”