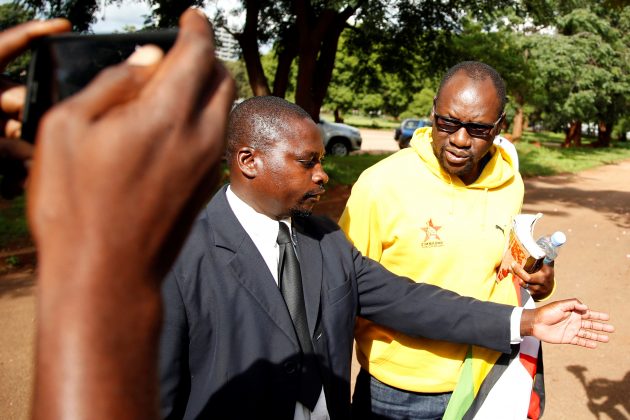 Zimbabwean activist pastor Evan Mawarire is escorted by detectives as he arrives at the Harare Magistrates courts in Harare, Zimbabwe, January 17, 2019. REUTERS/Philimon Bulawayo

HARARE (Reuters) – Zimbabwean activist pastor Evan Mawarire appeared in court on Thursday to be charged with subverting the government, punishable by up to 20 years in jail, after protests this week in which three people were killed and dozens injured.

Mawarire was arrested on Wednesday and initially charged by police with the lesser crime of inciting public violence after he posted on social media encouraging Zimbabweans to heed a strike call by the biggest labor union.

On entering the courthouse, he told reporters: “None of what I am accused of is what I have done at all. If we have true justice in this country, let’s see it at play. I am very upset.”

The Harare pastor rose to prominence as a critic of former strongman Robert Mugabe and led a national protest shutdown in 2016. He was tried on similar charges in 2017 but was acquitted by the High Court for lack of evidence.

President Emmerson Mnangagwa’s government decreed a 150 percent hike in fuel prices last weekend, which triggered the three-day strike, during which protesters barricaded roads with rocks and burnt tires in the capital Harare. In the second city of Bulawayo, shops were looted.

Police rounded up 600 people, including Mawarire and an opposition legislator, in a crackdown on protesters. A doctors’ group said they had treated 68 people for gunshot wounds.

The Zimbabwe Lawyers for Human Rights, whose lawyers are representing Mawarire and more than 130 others, said police had decided to upgrade the charges against Mawarire.

Mnangagwa promised to repair the struggling economy after replacing long-time leader Mugabe in an election following a coup in November 2017, Zimbabwe has fallen back into familiar ways.

While some businesses reopened on Thursday after the strike, new data showed that inflation had soared to a 10-year high of 42 percent in December, even before the fuel price increase.

As dollar shortages batter the economy, rocketing inflation is destroying the value of citizens’ savings.

The Zimbabwe Association of Doctors for Human Rights (ZADHR) said its members had treated 172 people, some with dog bites, in private and public hospitals since Monday, when the protests started.

“There are cases of patients who had chest trauma and fractured limbs who were forcibly taken from the hospital to attend court despite the advice of doctors,” ZAHDR said in a statement.

Of the 68 people treated for gunshot wounds, 17 underwent emergency surgery.

On Thursday, there were still long queues at the few filling stations selling fuel, sometimes under the watchful eye of soldiers.

The few shops that were open were packed with people buying basics such as sugar, flour and bread.

Media platforms including Whatsapp, Facebook and Twitter remained blocked because of a government order, leading to accusations from opposition figures that it wanted to prevent images of heavy-handed police tactics being broadcast around the world.