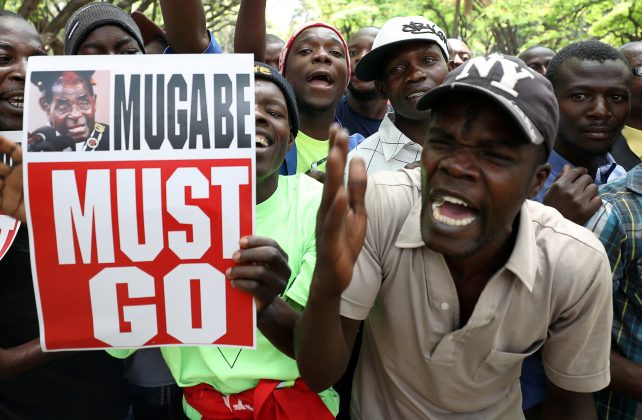 Protesters call for Zimbabwean President Robert Mugabe to resign across the road from parliament in Harare, Zimbabwe, November 21, 2017. REUTERS/Mike Hutchings

HARARE (Reuters) – Zimbabwe’s parliament began an impeachment process against President Robert Mugabe on Tuesday that looks set to bring his domination of a country he has ruled since independence nearly four decades ago to an ignominious end.

In the last week, Mugabe has clung on in the face of a collapse of his authority and a Monday deadline to quit. (Graphic on players http://tmsnrt.rs/2A87YBx)

The army seized power a week ago and there have been mass protests against him and calls to resign from many sides including on Tuesday from the ruling party’s favorite to succeed him Emmerson Mnangagwa. (Graphic on economy http://tmsnrt.rs/2zFGGlq)

Parliament Speaker Jacob Mudenda said he received a motion to impeach and the parliament would adjourn to a hotel to start the proceedings on Tuesday afternoon. Zimbabwean law says a joint sitting can take place anywhere. Thousands or people demonstrated outside parliament urging Mugabe to quit. (Graphic on currency http://tmsnrt.rs/2mwbtLU)

Mugabe led Zimbabwe’s liberation war and is hailed as one of Africa’s founding fathers and a staunch supporter of the drive to free neighbouring South Africa from apartheid in 1994.

But many people in Africa and beyond also say he has damaged Zimbabwe’s economy, democracy and judiciary by staying in power for too long and has used violence to crush perceived political opponents.