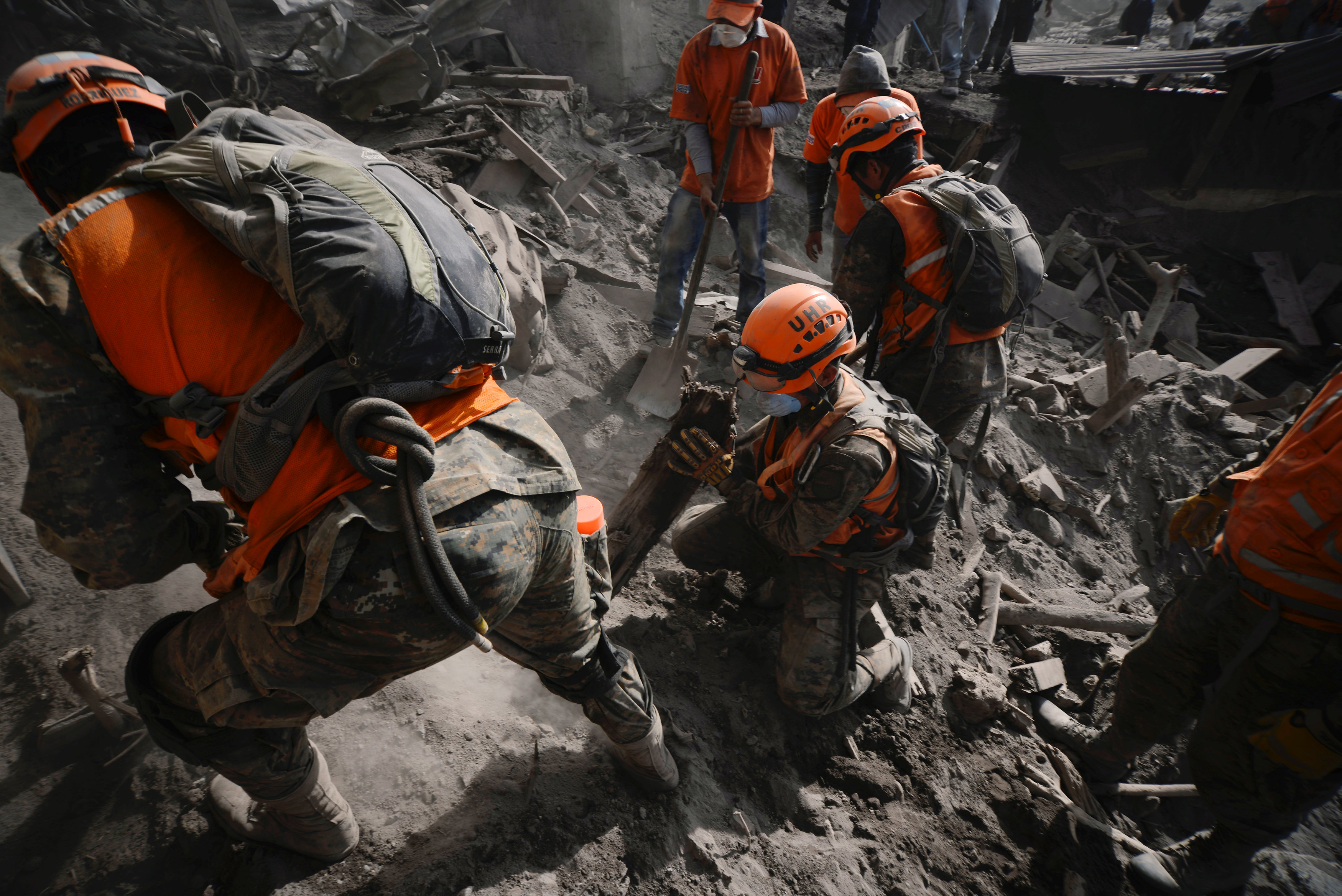 SAN MIGUEL LOS LOTES, Guatemala (Reuters) – Rescuers scoured a lava- and ash-ravaged landscape in Guatemala for a third straight day on Wednesday in search of survivors and victims of Fuego volcano’s calamitous eruption, which has killed at least 99 people.

Volcan de Fuego, which means “Volcano of Fire,” exploded on Sunday in its most devastating eruption in more than four decades, showering ash on a wide area and sending rapid pyroclastic flows through nearby towns. 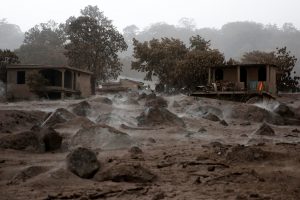 Volcanic rocks are seen around houses after the eruption of the Fuego volcano at El Rodeo in Escuintla, Guatemala June 6, 2018. REUTERS/Carlos Jasso

The volcano shot thick plumes of ash miles (km) into the sky that rained down on nearby towns and a thick smoldering layer of ash and volcanic rock blanketed the tiny hamlet of San Miguel Los Lotes, with only the roofs of some homes sticking out.

The Central American country’s disaster and forensic agency Inacif on Wednesday afternoon raised the death toll to at least 99, up from 85.

But by Wednesday morning, rescuer workers were back at work with pickaxes, metal rods and flashlights in hand, risking their own lives in search of victims or a miracle survivor. Bulldozers stood by to help.

“We can only work in places where we can stand on the roofs of houses … because the ash is very hot. There are places where you stick the pickaxe or rod in and we see a lot of smoke coming out and fire and it’s impossible to keep digging because we could die,” said 25-year-old rescuer Diego Lorenzana. 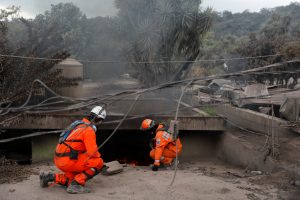 Rescue workers inspect a house at an area affected by the eruption of the Fuego volcano at El Rodeo in Escuintla, Guatemala June 6, 2018. REUTERS/Carlos Jasso

Elsewhere, rescuers plunged metal rods into the quickly hardening ash that sat atop what was previously a roadway in a desperate search for trapped vehicles, a video by local TV station Televisiete showed.

The extent of the devastation was widespread.

An elderly man, who was featured in a video shortly after the eruption that showed him in a state of shock, caked from head to toe in ash and mud, died from the severe burns he suffered.

Guatemala’s national disaster management agency, CONRED, said 1.7 million people have been affected by the volcanic eruption and over 12,000 have been evacuated.

The International Federation of Red Cross and Red Crescent Societies said they have released more than 250,000 Swiss francs ($253,446) from its global emergency fund to support frontline emergency efforts.

These funds will help “Guatemala Red Cross support 3,000 of the most vulnerable survivors for three months,” they added. 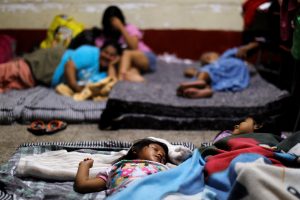 A child sits sleep in a provisional shelter after the eruption of the Fuego volcano has damaged her community in a local school in Escuintla, Guatemala June 6, 2018. REUTERS/Carlos Jasso

In addition, the Mexican government said on Wednesday evening that it would send a team of medical specialists and, if necessary, transfer victims to hospitals in Mexico.

The 3,763-meter (12,346-feet) Volcan de Fuego is one of several active volcanoes among 34 in the Central American country. It lies near the colonial city of Antigua, a UNESCO world heritage site that has survived several major eruptions.