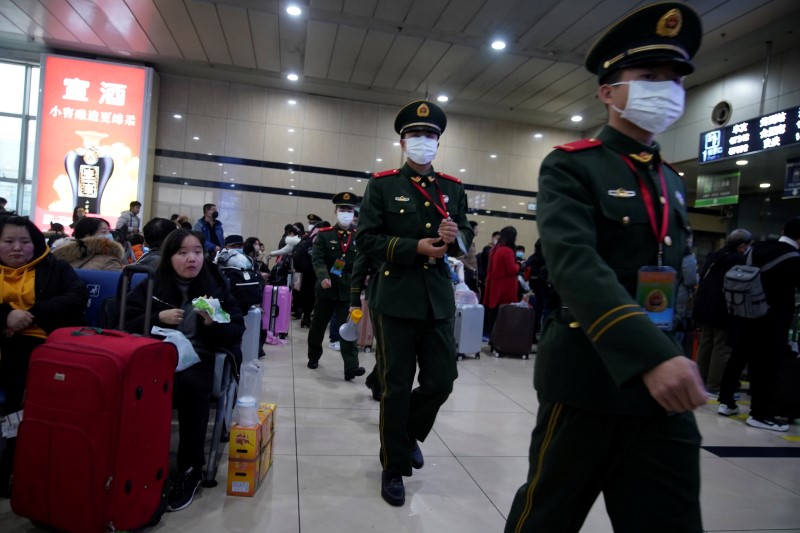 By Cate Cadell and David Stanway

BEIJING/SHANGHAI (Reuters) – Deaths from China’s new flu-like virus rose to 17 on Wednesday with more than 540 cases confirmed, increasing fears of contagion from an infection suspected to originate from illegally traded wildlife.

The previously unknown coronavirus strain is believed to have emerged from an animal market in central city of Wuhan, with cases now detected as far away as the United States.

Contrasting with its secrecy over the 2002-03 Severe Acute Respiratory Syndrome (SARS) that killed nearly 800 people, China’s communist government has this time given regular updates to try to avoid panic as millions travel for the Lunar New Year.

“The rise in the mobility of the public has objectively increased the risk of the epidemic spreading,” National Health Commission vice-minister Li Bin said.

The World Health Organization (WHO) was meeting in a high-tech room at its Geneva headquarters to decide whether the outbreak is a global health emergency.

Many Chinese were cancelling trips, buying face masks, avoiding public places such as cinemas and shopping centers, and even turning to an online plague simulation game or watching disaster movie “The Flu” as a way to cope.

“The best way to conquer fear is to confront fear,” said one commentator on China’s Twitter-like Weibo.

The virus has spread from Wuhan to population centers including Beijing, Shanghai, Macau and Hong Kong.

With more than 11 million people, Wuhan is central China’s main industrial and commercial center and a transport hub, home to the country’s largest inland port and gateway to its Three Gorges hydroelectric dam.

The latest death toll in Hubei province, of which Wuhan is the capital, rose from nine to 17 by midday on Wednesday, state television quoted the provincial government as saying.

The official China Daily newspaper said 544 cases had now been confirmed in the country. Thailand has confirmed four cases, while the United States, Taiwan, South Korea and Japan have each reported one.

U.S. President Donald Trump said U.S. Centers for Disease Control and Prevention had a good containment plan. “We think it is going to be handled very well,” he said at Davos in Switzerland.

Li said the virus, which can cause pneumonia and has no effective vaccine, was being spread via breathing. Symptoms include fever, coughing and difficulty breathing.

“I believe the government for sure, but I still feel fearful. Because there’s no cure for the virus,” said Fu Ning, a 36-year-old woman in Beijing. “You have to rely on your immunity if you get an infection. It sounds very scary.”

Fears of a pandemic initially spooked markets but they regained their footing on Wednesday.

But companies across China, from Foxconn  to Huawei Technologies and HSBC Holdings , warned staff to avoid Wuhan and handed out masks.

Terry Gou, founder of Apple supplier Foxconn, said he was advising employees not to visit China. Automaker General Motors Co, which operates a plant in Wuhan in a joint venture with China’s SAIC Motor, placed a temporary restriction on employees’ travel to Wuhan.

The chief executive of one of the world’s largest aircraft lessors, Aercap, said he expected the virus to impact Chinese airlines’ profitability in the first quarter.

Chinese officials believe wildlife trafficked at a Wuhan market was the source of the virus. Two sources said provincial and city officials in Wuhan had been told to remain in the city, and those who have left were told to report their whereabouts.

WHO spokesman Tarik Jasarevic said new cases would appear as China increased monitoring. But Li said there was no evidence of “super-spreaders” capable of disseminating the virus more widely, as happened during the SARS outbreak. SARS was thought to have crossed to humans from civet cats sold for food.

Russia strengthened its sanitary and quarantine controls, Britain said it was starting enhanced monitoring of passengers from Wuhan, and Singapore started screening all passengers from China. Italy created a task force to monitor the possible spread of the virus.

The Chinese-ruled gambling hub of Macau confirmed its first case of pneumonia linked to the coronavirus and tightened body-temperature screening measures.

A first case emerged in Chinese-ruled Hong Kong, media reported, with the patient arriving via high-speed railway from the mainland, and Mexico was investigating a potential case.

China’s Central Political and Legal Affairs Commission, the top legal authority, said anyone failing to report virus cases “will be forever nailed to the pillar of historical shame”.

But some experts were skeptical. “We have reason to doubt whether surv (surveillance) is adequate as cases mount,” tweeted Lawrence Gostin, a public health expert at Georgetown University Law School in Washington.