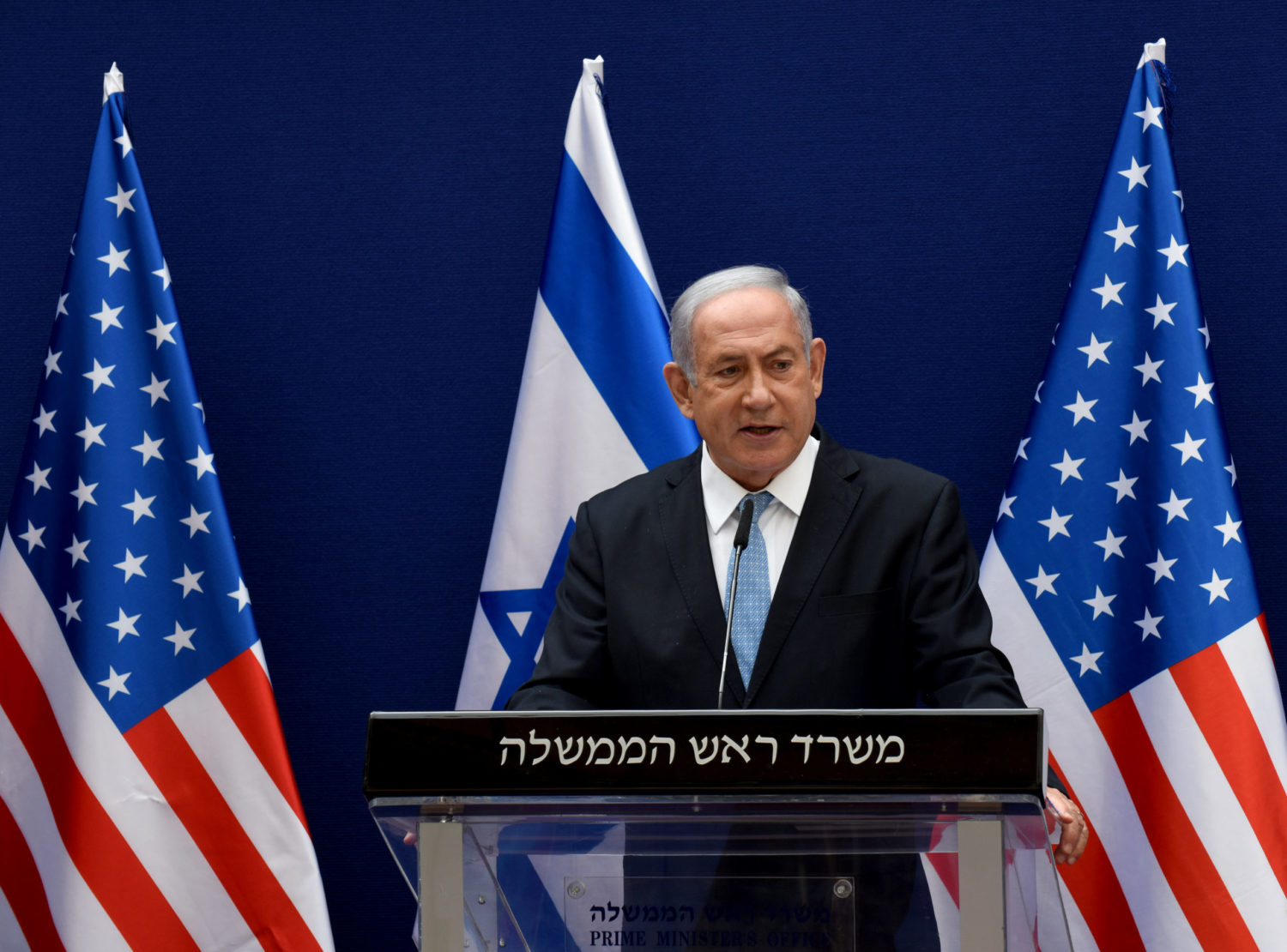 JERUSALEM (Reuters) – Israel and the United Arab Emirates agreed on Tuesday to set up a joint committee to cooperate on financial services, aiming to promote investment between the two countries, an Israeli statement said.

An Israeli delegation is in Abu Dhabi on a historic trip to finalize a pact marking open relations between Israel and the Gulf state.

Representatives from both countries signed the understanding, Israeli Prime Minister Benjamin Netanyahu said in the statement.

One focus, Netanyahu said, would be on “cooperation in the field of financial services and removing financial barriers for making investments between the countries, as well as promoting joint investments in the capital markets”.

The countries will also collaborate in banking services and payment regulations, he said.

Separately, the state-run Abu Dhabi Investment Office (ADIO) and Invest in Israel, part of the economy ministry, agreed to set out a plan to establish formal cooperation between then, they said in a joint statement.

“The organizations will explore mutually beneficial areas of collaboration to unlock investment and partnership opportunities for companies in Israel and Abu Dhabi with a strong focus on innovation and technology,” they said.

“Israel’s ecosystem has a lot to offer to the UAE’s economy in terms of innovation, specifically in the Life Sciences, CleanTech, Agtech and Energy sectors,” Eger said in the statement.

Israeli officials have been quick to play up the economic benefits of the accord, which once formalized would also include agreements on tourism, technology, energy, healthcare and security, among other areas.

A number of Israeli and Emirati businesses have already signed deals since the normalization deal was announced. 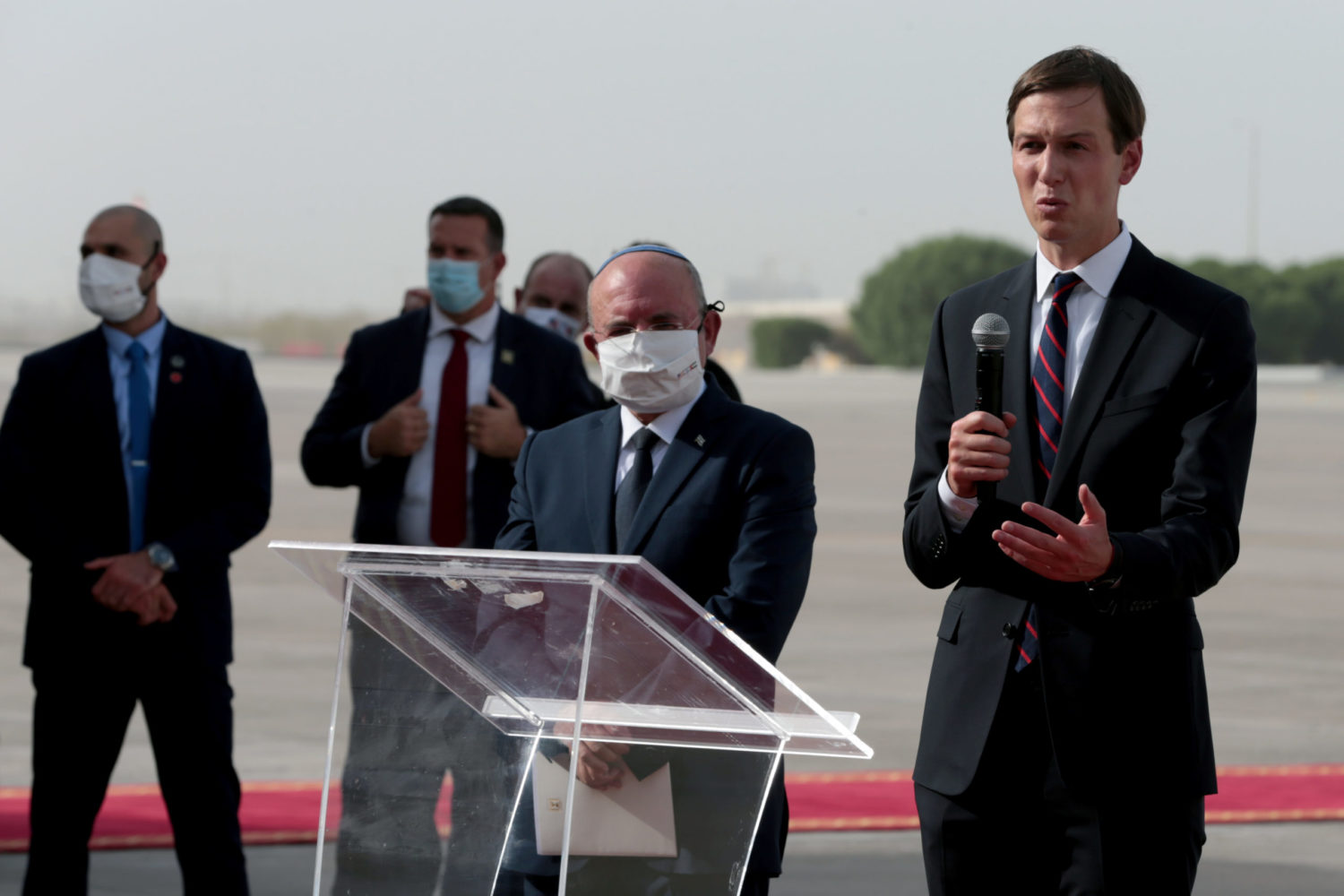 ABU DHABI (Reuters) – Senior U.S. and Israeli officials landed in the United Arab Emirates on Monday on a historic trip to finalize a pact marking open relations between Israel and the Gulf state, and they told Palestinians it was now time for them to negotiate peace.

In apparently unrelated incidents, two blasts at restaurants in Abu Dhabi and Dubai killed three people earlier in the day in what authorities said were the result of gas malfunctions. The Abu Dhabi government told residents “to avoid spreading rumors” about the blasts, and “use official news sources”.

Announced on Aug. 13, the normalization deal is the first such accommodation between an Arab country and Israel in more than 20 years and was forged largely through shared fears of Iran.

Palestinians were dismayed by the UAE’s move, seeing it as a betrayal that would weaken a long-standing pan-Arab position which calls for Israeli withdrawal from occupied territory and acceptance of Palestinian statehood in return for normal relations with Arab countries.

Kushner said Palestinians should not be “stuck in the past”.

Israel and the United Arab Emirates will discuss economic, scientific, trade and cultural cooperation on the visit. Direct flights between the two countries will also be on the agenda, an Israeli Foreign Ministry spokesman told al Arabiya television after landing in Abu Dhabi.

Even before landing, the delegates made aviation history when the Israeli commercial airliner flew over Saudi territory on the direct flight from Tel Aviv to the UAE capital.

“That’s what peace for peace looks like,” Netanyahu tweeted, describing a deal for formal ties with an Arab state that does not entail handover of land that Israel captured in the 1967 Middle East war.

Israeli officials hope the two-day trip will produce a date for a signing ceremony in Washington, perhaps as early as September, between Netanyahu and Abu Dhabi’s Crown Prince Sheikh Mohammed bin Zayed al-Nahyan.

That could give U.S. President Donald Trump a foreign policy boost ahead of his re-election bid in November.

The Trump administration has tried to coax other Sunni Arab countries concerned about Iran to engage with Israel. The most powerful of those, Saudi Arabia, while opening its airspace to the El Al flight, has signaled it is not ready.

On board the packed airliner, passengers were welcomed in Arabic as well as English and Hebrew, a gesture marking the historic flight.

“Wishing us all salaam, peace and shalom, have a safe flight,” the pilot, Captain Tal Becker, said on the intercom, in Arabic, English and Hebrew, using all three languages to also announce the flight number and destination.

Like all El Al 737s, the aircraft was equipped with an anti-missile system, an Israeli spokesman said, and carried security agents of the U.S. Secret Service and the Israeli Shin Bet.

Palestinian leaders expressed anger at a deal which they believe further erodes their struggle for an independent state.

“Peace is not an empty word used to normalize crimes and oppression. Peace is the outcome of justice,” politician Saeb Erekat said in a Tweet.

“Peace is not made by denying Palestine’s right to exist and imposing an apartheid regime. Apartheid is what Netanyahu means by “peace for peace.”

The Islamist Hamas group, which controls the Palestinian enclave of Gaza, also condemned the UAE.

The flight represented a “stab in the back of the Palestinian people, a prolonging of the occupation, and a betrayal of the resistance of the (Palestinian) people,” Hamas said in a statement.

Hours before the plane landed, three people were killed and several others were injured in two separate explosions in Abu Dhabi and UAE tourism hub Dubai, police and local media said.

The Abu Dhabi government media office said two people were killed in the blast in the capital, which the National daily reported hit KFC and Hardee’s restaurants, which are located on a main road leading to the airport.

In a second incident, one person was killed when a gas cylinder exploded in a Dubai restaurant, local media reported. 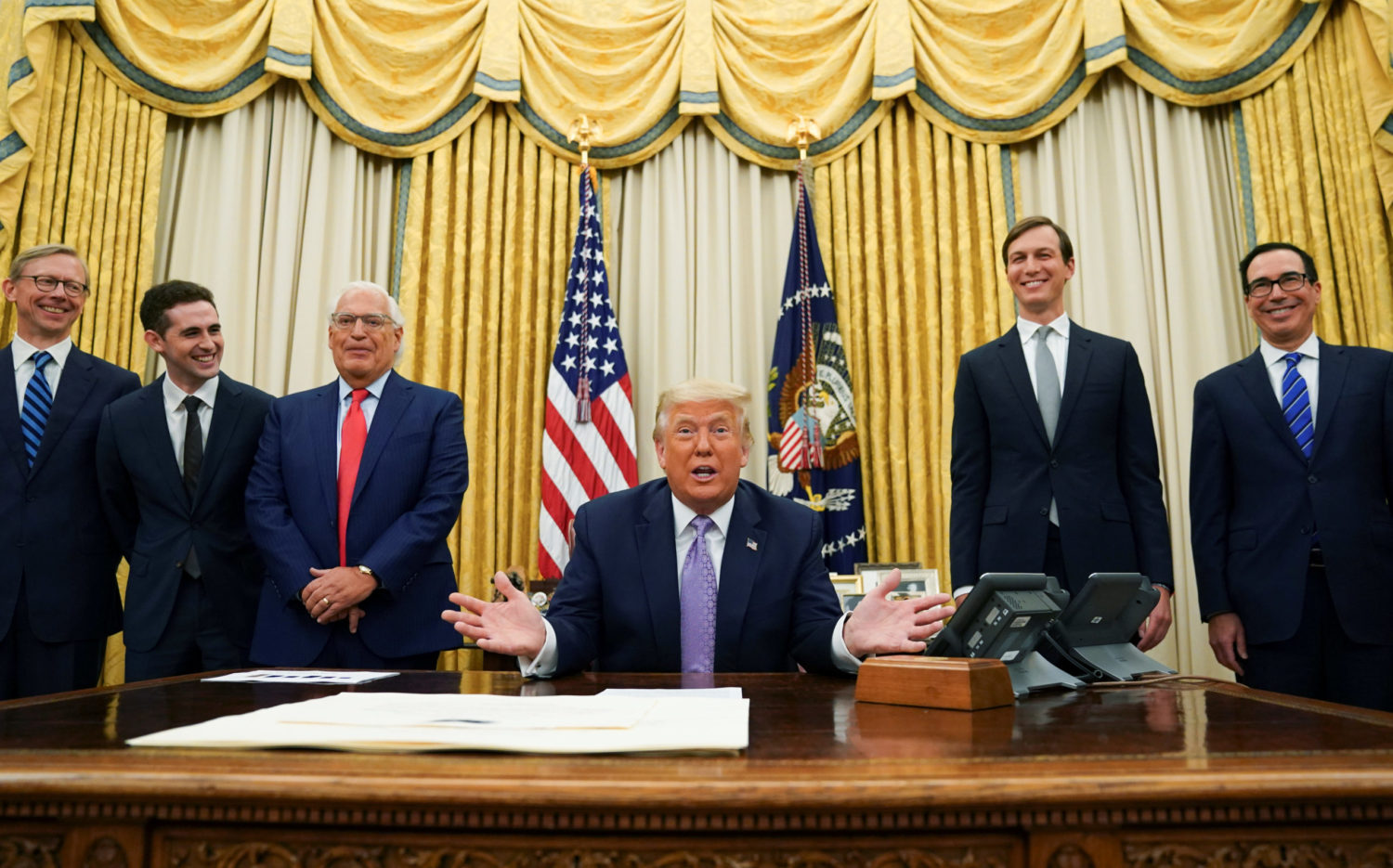 DUBAI/JERUSALEM/WASHINGTON (Reuters) – Israel and the United Arab Emirates announced on Thursday that they will normalize diplomatic ties and forge a broad new relationship, a move that reshapes the order of Middle East politics from the Palestinian issue to Iran.

Under the accord, which U.S. President Donald Trump helped broker, Israel has agreed to suspend its planned annexation of areas of the occupied West Bank. The agreement also firms up opposition to regional power Iran, which the UAE, Israel and the United States view as the main threat in the conflict-riven Middle East.

Israel had signed peace agreements with Egypt in 1979 and Jordan in 1994. But the UAE, along with most other Arab nations, did not recognize Israel and had no formal diplomatic or economic relations with it until now. The UAE becomes the first Gulf Arab country to reach such a deal with the Jewish state.

The agreement was the product of lengthy discussions between Israel, the UAE and the United States that accelerated recently, White House officials said.

“This historic diplomatic breakthrough will advance peace in the Middle East region and is a testament to the bold diplomacy and vision of the three leaders and the courage of the United Arab Emirates and Israel to chart a new path that will unlock the great potential in the region,” the statement said.

In a separate statement, the crown prince stressed that the agreement would stop further Israeli annexation of Palestinian territories, which Israel has said had been awaiting a green light from Washington.

The agreement, to be known as the Abraham Accords, also gives Trump a foreign policy accomplishment as he seeks re-election on Nov. 3.

In the White House Oval Office, Trump said similar deals are being discussed with other countries in the region.

The UAE said it would remain a strong supporter of the Palestinian people and that the agreement maintained the viability of a two-state solution to the longstanding Israel-Palestinian conflict. There was no immediate reaction from the Palestinians, who hope to create an independent state in the occupied West Bank, Gaza and East Jerusalem.

Netanyahu said the agreement represented a “historic day” for his country. It could also be a personal boost to Netanyahu, who is on trial for alleged corruption and whose domestic popularity has dropped over his handling of the coronavirus pandemic.

A senior Israeli official said applying Israeli sovereignty to areas of the West Bank was still on the agenda, adding, “The Trump administration asked us to temporarily suspend the (sovereignty) announcement so that the historic peace agreement with the UAE can be implemented.”

U.S. Secretary of State Mike Pompeo, who is on a trip to Central European countries, said: “This is an enormous, historic step forward. Peace is the right path forward.”

There was no immediate response from the Iranian government but the Tasnim news agency, affiliated with Iran’s powerful Revolutionary Guards, called the accord “shameful”.

Iran and Israel are arch foes. Israel is particularly concerned about suspected Iranian efforts to develop nuclear weapons, which Tehran denies. Iran is also involved in proxy wars from Syria to Yemen, where the UAE has been a leading member of the Saudi-led coalition opposing Iran-aligned forces there.

With a population of less than 10 million but the Arab world’s second-largest economy thanks to oil, the UAE has exerted growing commercial and military clout in the Gulf and the wider region over the past two decades, much of it aimed at confronting Islamist militants and the influence of Iran.

U.S. lawmakers have tried to rein in Trump administration plans for arms sales, particularly to Saudi Arabia and the United Arab Emirates for use in the war in Yemen.

Delegations from Israel and the United Arab Emirates will meet in the coming weeks to sign agreements regarding investment, tourism, direct flights, security, telecommunications and other issues, the statement said.

The two countries, which agreed in June to cooperate in the fight against the coronavirus in a sign of closer ties, are expected soon to exchange ambassadors and embassies.

The joint statement said that “as a result of this diplomatic breakthrough and at the request of President Trump with the support of the United Arab Emirates, Israel will suspend declaring sovereignty” over areas of the West Bank that were envisioned in a U.S. plan announced by Trump in January.

A signing ceremony including delegations from Israel and the United Arab Emirates is due to be held at the White House in the coming weeks.

“Everybody said this would be impossible,” Trump said. “After 49 years, Israel and the United Arab Emirates will fully normalize their diplomatic relations.”

Trump added, “This deal is a significant step towards building a more peaceful, secure and prosperous Middle East. Now that the ice has been broken, I expect more Arab and Muslim countries will follow the United Arab Emirates’ lead.”

This was already being discussed with other states, he said.

The agreement envisions giving Muslims greater access to the Al-Aqsa Mosque in the Old City of Jerusalem by allowing them to fly from Abu Dhabi to Tel Aviv, White House officials said.

United Nations Secretary-General Antonio Guterres welcomed “any initiative that can promote peace and security in the Middle East region,” a U.N. spokesman said.

Guterres had urged Israel in June to abandon plans to annex settlements in the West Bank, warning that this threatened prospects for peace with the Palestinians.