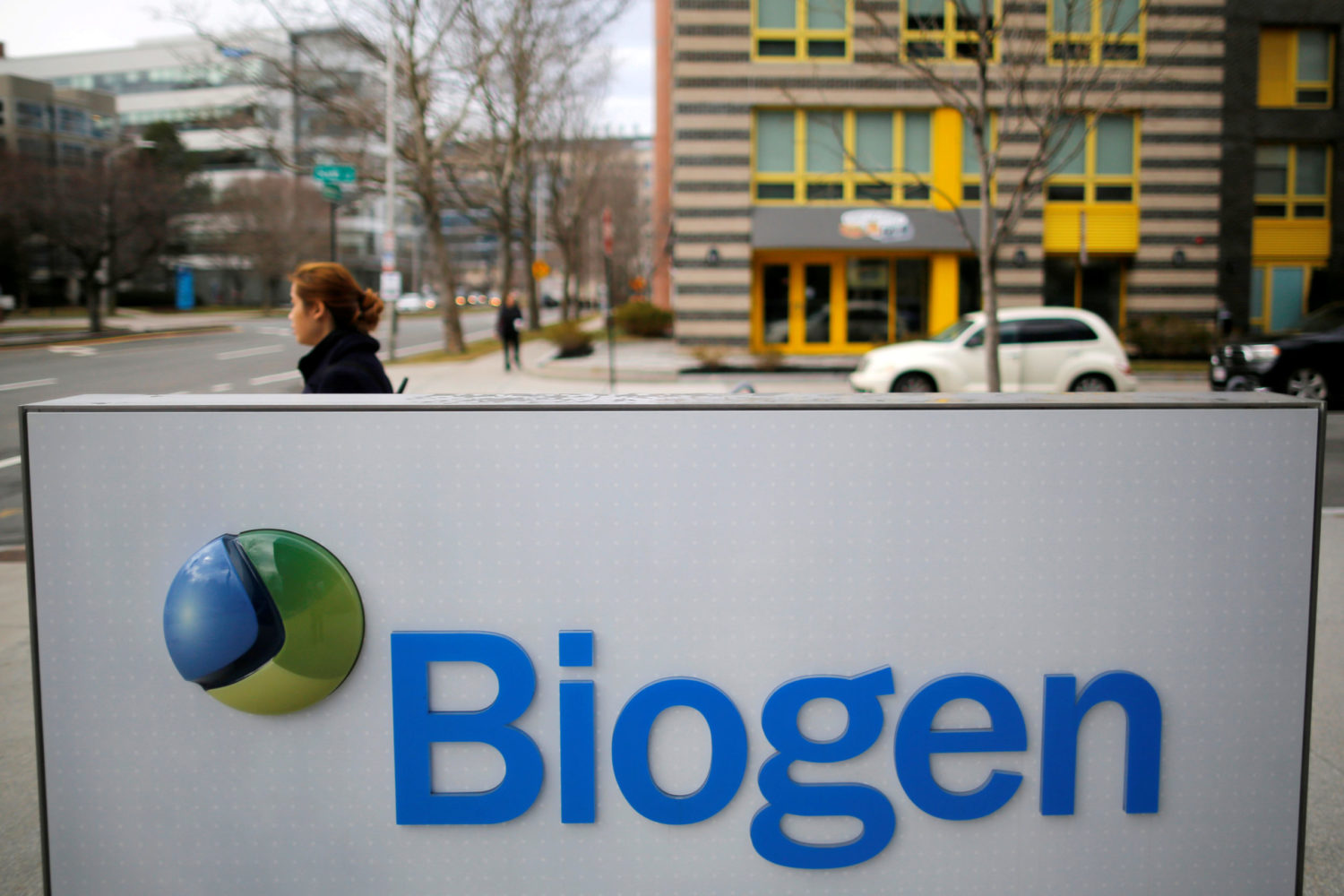 An FDA approval could come by March, which would make the drug, aducanumab, the first new treatment for the disease in decades and the first that appears to be able to slow progression of the fatal, mind-wasting condition that affects millions of people.

Shares of Biogen and its partner Eisai Co Ltd both jumped 40%. The FDA staff comments also buoyed shares of other Alzheimer’s drug developers, including a 15% rise in shares of Eli Lily and Co.

The agency’s documents were released ahead of a meeting on Friday of outside experts who will review, and decide whether to recommend approval of, aducanumab, an antibody designed to remove amyloid plaques from the brain.

FDA drug reviewers said results from one pivotal trial of aducanumab were persuasive and strongly positive. They acknowledged that a second large trial did not succeed, but maintained it did not detract from the findings of the positive study. The FDA is not obligated to abide by its expert panel recommendations, but typically does.

One statistical reviewer at the FDA said another study is needed to confirm whether aducanumab is effective. “There is no compelling substantial evidence of treatment effect or disease slowing,” FDA staffer Tristan Massie wrote in the review.

Alzheimer’s disease afflicts nearly 6 million Americans and millions more worldwide. Biogen estimates about 1.5 million people with early Alzheimer’s in the United States could be candidates for its drug.

Patient advocacy groups have argued that aducanumab needs to be approved due to that large unmet medical need.

“If a third trial is recommended then years could go by … while people aren’t granted access to the drug,” said Dr. Howard Fillit, chief science officer at the Alzheimer’s Drug Discovery Foundation.

Biogen and its investors also need an aducanumab approval after the company recently lost a patent fight over its big-selling multiple sclerosis drug Tecfidera. If approved, annual sales are forecast to reach $5.3 billion by 2025, according to Refinitiv.

Cambridge, Massachusetts-based Biogen in October last year revived its plans to seek approval for aducanumab, months after it had said that an independent futility analysis of its two pivotal studies showed they were unlikely to succeed.

Biogen said it changed course after a new analysis showed a high dose of the drug could slow disease progression.

The FDA staff said data from one of the trials “provides the primary evidence of effectiveness as a robust and exceptionally persuasive study demonstrating” a clinically meaningful treatment effect.

(Reuters) – U.S. health experts this week will decide whether to recommend approval for Biogen Inc’s Alzheimer’s drug, which could become the first new treatment for the mind-wasting disease in decades even as serious questions persist over whether data show if it works.

In a field littered with unrelenting failure, Biogen believes in aducanumab it has the first drug that can treat an underlying cause, and therefore slow progression, of Alzheimer’s. But its path to approval has been anything but smooth or assured.

Biogen abruptly ended clinical trials of aducanumab last year after an early look at trial results showed it was not effective. Last October, the company shocked many Alzheimer’s experts by reversing course, saying that a new analysis showed aducanumab could help patients with early-stage disease preserve their ability to function independently for longer. In July, Biogen filed for approval from the Food and Drug Administration.

Now the agency faces tremendous pressure to approve a treatment option for millions of Americans suffering from Alzheimer’s and the millions more expected to face it in coming years.

Patient advocates say the need for a new Alzheimer’s treatment that could help people remain independent is heightened by the coronavirus pandemic, which has killed more than 229,000 people in the United States, including tens of thousands of seniors in nursing homes.

“The pandemic came and it changed everything,” said Russ Paulsen, chief operating officer at patient advocacy group UsAgainstAlzheimer’s. “We need something to keep people out of nursing homes.”

A committee of outside advisers to the FDA will discuss aducanumab on Nov. 6. The agency’s final decision is expected by March. European health regulators have also accepted the drug for review.

Charles Flagg, a 79-year-old retired minister from Jamestown, Rhode Island, had been enrolled for years in a trial of aducanumab before it was stopped. He started receiving the drug again in August as part of a follow-up study, according to his wife Cynthia Flagg.

“He’s not 100 percent himself, but overall I’m not dealing with someone that needs to be led around or be in a care home,” Flagg said.

Aducanumab, an antibody designed to remove amyloid plaques from the brain – a strategy tried with many failed Alzheimer’s drugs – would reap billions of dollars in sales if approved.

Biogen, along with partner Eisai Co Ltd <4523.T>, is one of the last large drugmakers pursuing treatments for a disease that afflicts nearly 6 million Americans and millions more worldwide. Biogen estimates about 1.5 million people with early Alzheimer’s in the United States could be candidates for the drug.

Late last year, Biogen said one of its two pivotal studies of aducanumab showed a statistically significant benefit at slowing cognitive and functional decline in patients with early Alzheimer’s. A second trial failed to achieve that goal, but did show a benefit for a subset of patients who were given a high dose for at least 10 months.

In March, it opened a follow-up long-term safety study to 2,400 people who had previously participated in trials of aducanumab, like Flagg.

Many Alzheimer’s researchers say Biogen should conduct a third large study to prove aducanumab works. They worry about its possible side-effects, such as brain-swelling, and the potential cost.

“Aducanumab’s efficacy as a treatment for the cognitive dysfunction in Alzheimer’s disease cannot be proven by clinical trials with divergent outcomes,” said Mayo Clinic neurologist Dr. David Knopman, who was recused from the expert panel because he helped conduct the trials.

Others believe the FDA could approve the drug without another trial.

Previous clinical studies had largely targeted patients in later stages of the disease, while many experts now believe attacking Alzheimer’s as early as possible may be the key to success. But there was a lack of clarity on how to assess a drug’s success when functional deficits are less pronounced.

In 2018, the FDA revised its standard of proof guidance for reviewing Alzheimer’s drugs by essentially combining what had been separate goals for cognition, or memory, and day-to-day function. The new guidance stressed the need for a drug to show “clinically meaningful” benefits, a term it has not clearly defined.

Alzheimer’s advocacy groups are pushing for a broad definition, saying it should include preserving the ability to perform daily activities such as shopping independently or remembering to turn off a stove.

“They have been trying to lower the bar and help any company to get a drug approved,” said Dr. Marwan Sabbagh, from the Cleveland Clinic Lou Ruvo Center for Brain Health in Las Vegas. “How much (improvement) do you need to be clinically meaningful? Naturally this is very subjective.”

The FDA did not immediately respond to a request for comment.