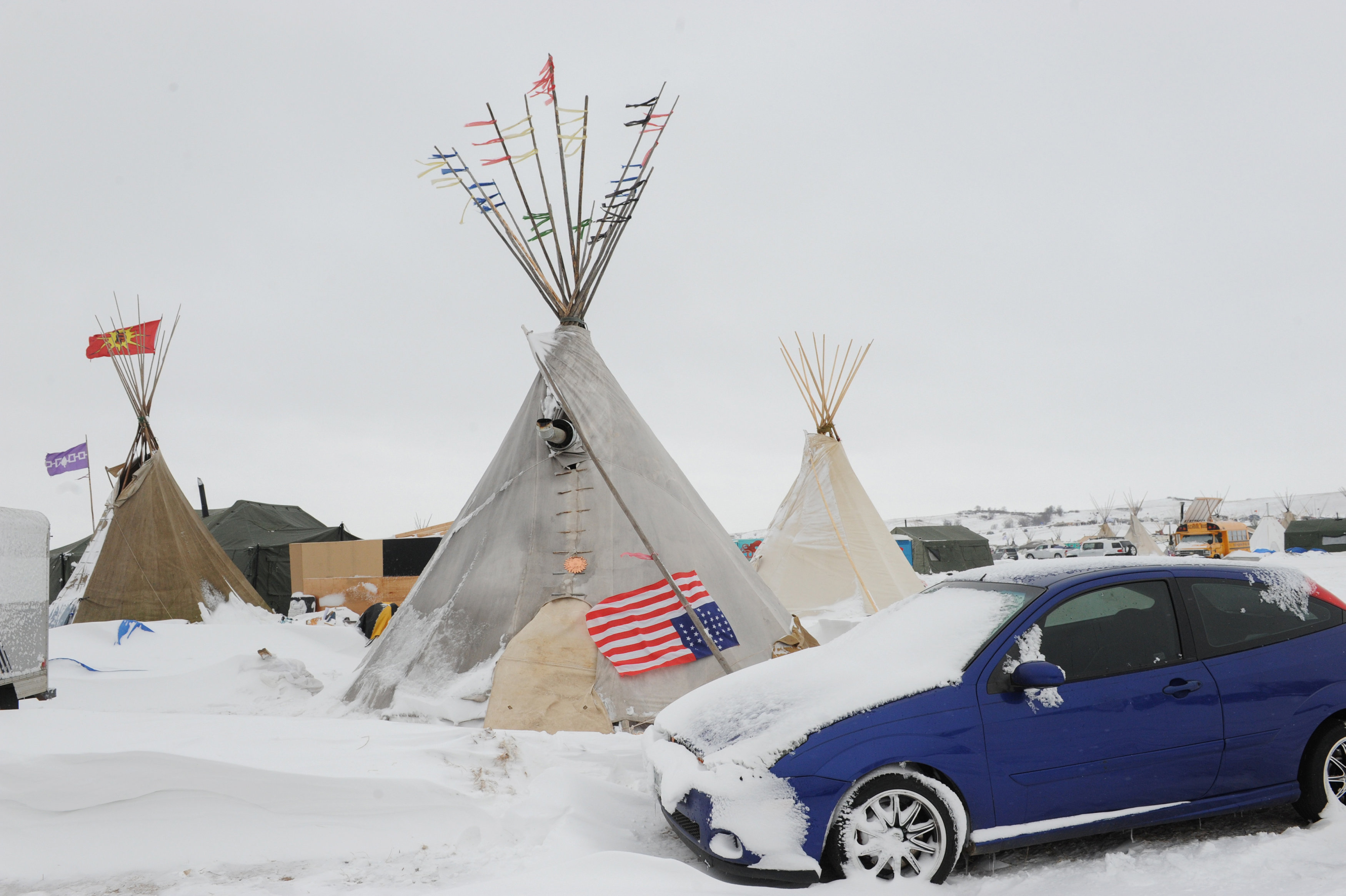 CANNON BALL, N.D. (Reuters) – U.S. military veterans were set to arrive at a camp to join thousands of activists braving snow and freezing temperatures to protest a pipeline project near a Native American reservation in North Dakota.

Protesters have spent months rallying against plans to route the $3.8 billion Dakota Access Pipeline beneath a lake near the Standing Rock Sioux reservation, saying it poses a threat to water resources and sacred Native American sites.

State officials had issued an order on Monday for activists to vacate the Oceti Sakowin camp, located on U.S. Army Corps of Engineers land near Cannon Ball, North Dakota, citing harsh weather conditions. Officials said on Wednesday they will not actively enforce that order.

The Standing Rock Sioux, in a statement on Wednesday, scoffed at the state order, noting that because “the Governor of North Dakota and Sheriff of Morton County are relative newcomers” to the land, “it is understandable they would be concerned about severe winter weather.”

They said the camp has adequate shelter to handle the cold weather, adding that the Great Sioux Nation has survived “in this region for millennia without the concerns of state or county governments.”

The temperature in Cannon Ball is expected to fall to 6 degrees Fahrenheit (-2 Celsius) by the middle of next week, according to Weather.com forecasts.

The 1,172-mile (1,885 km) pipeline project, owned by Texas-based Energy Transfer Partners LP, is mostly complete, except for a segment planned to run under Lake Oahe, a reservoir formed by a dam on the Missouri River.

Veterans Stand for Standing Rock, a contingent of more than 2,000 U.S. military veterans, intends to reach North Dakota by this weekend and form a human wall in front of police, protest organizers said on a Facebook page.

Protesters, who refer to themselves as “water protectors,” have been gearing up for the winter while they await the Army Corps decision on whether to allow Energy Transfer Partners to tunnel under the river. That decision has been delayed twice by the Army Corps. 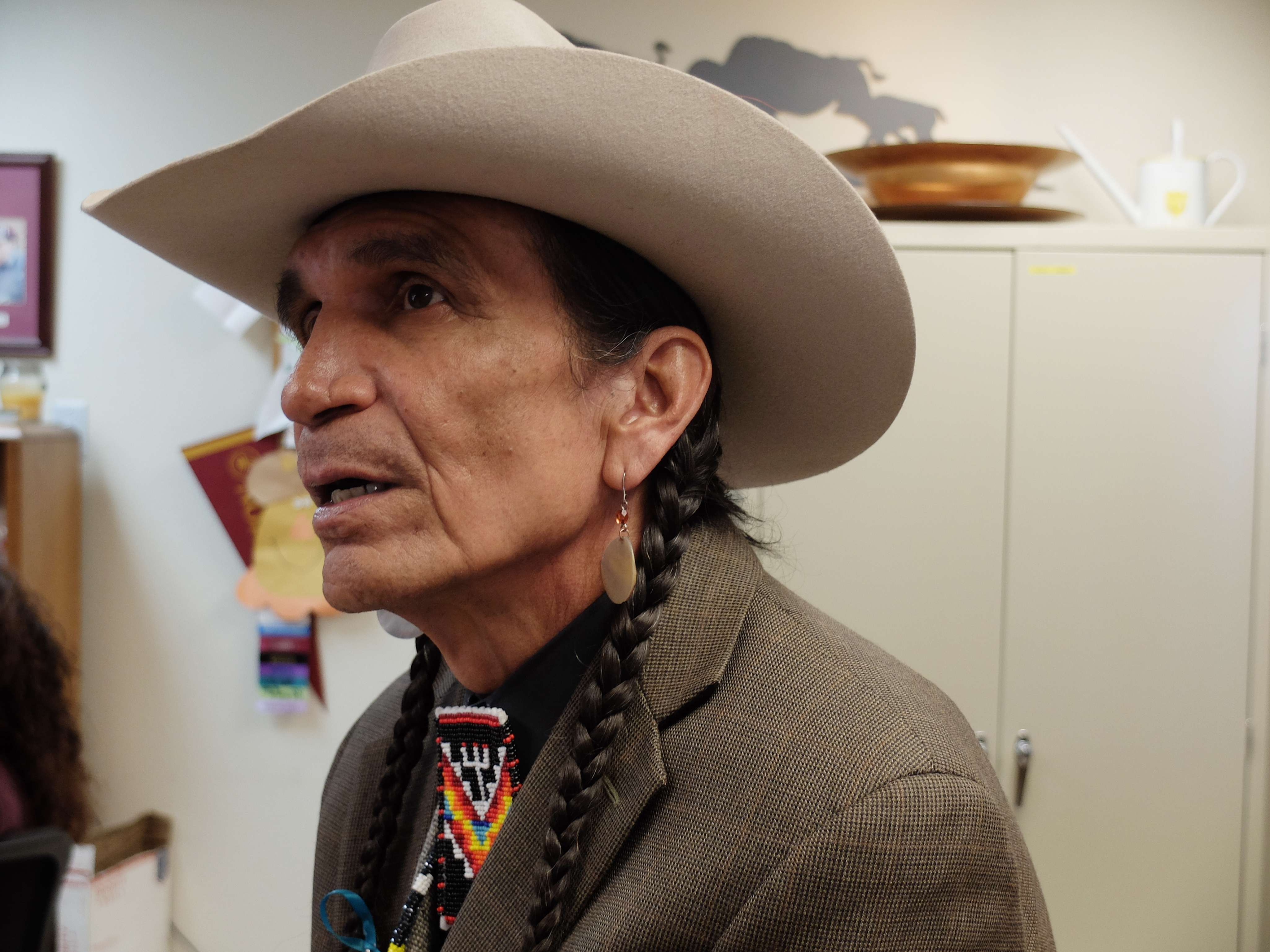 POPLAR, Montana (Thomson Reuters Foundation) – A victims’ advocate on the Fort Peck Indian Reservation figures she first saw sex trafficking more than a decade ago, a local nurse says it happened in her own family and a women’s counselor is sure she has seen it countless times.

But while it was sex trafficking, it had no name, they say.

Law enforcement, advocates and residents of Fort Peck, a vast, remote reservation of windswept plains in the U.S. state of Montana, say they have been seeing cases of sex trafficking for years without labeling them as such.

Tribal law at Fort Peck only added sex trafficking as a distinct crime earlier this year, distinguishing it from rape, sexual abuse or kidnapping, experts say.

Public awareness of the crime is critical, say activists who held a conference last month on recognizing trafficking on the reservation.

“We have to acknowledge and say that sex trafficking is happening in our communities,” said Toni Plummer-Alvernaz, a conference organizer.

“Native women are trafficking their relatives. People are often trading their bodies for drugs,” she said.

Colleen Clark estimates she has counseled some 8,000 victims of violence during her three decades working at the Red Bird Women’s Center in Wolf Point, the reservation’s largest town with a population of fewer than 3,000 residents.

“When I look back through those years, I can see where some of those women were victims of human trafficking,” Clark said.

“But we didn’t have a name for that then. There was not a whole lot of public awareness.”

Even now, numbers don’t tell the story, and there is little in the way of statistics to quantify what experts, advocates and authorities say is happening.

“Based on our investigation of trafficking on Fort Peck, the scope of the problem is far larger than any information we have so far in terms of statistics would reflect,” said Melina Healey, a trafficking expert at the Child Law Policy and Legislation Clinic at Loyola University Chicago.

She helped write the tribal law against trafficking.

Updating the law with trafficking will help in efforts to collect data and “demonstrate to the community and to other governments, to the public at large that there’s a problem here and it’s reaching crisis levels,” she said.

One obstacle is overcoming myths and stereotypes, experts said.

“The popular idea of what sex trafficking involves often is people chained to a basement, Russian women brought over to this country in container ships and sold into slavery,” Healey said. “But sex trafficking doesn’t look like that most of the time.”

It can simply involve a person being exploited for sex, someone buying the sex and someone else orchestrating the deal, she said.

“There’s no movement across borders or physical confinement necessary,” she said.

Evidence of trafficking on the Fort Peck reservation won’t be found in federal statistics, said Cyndee Peterson, an assistant U.S. Attorney in Montana who heads up a task force teaching law enforcement and attorneys to recognize trafficking.

Records, she said, do not show federal prosecutors handling any trafficking cases on Fort Peck going back five years.

“How do we know these cases are here? Because the advocates that actually are on the ground talking to the victims are telling me,” she told the Thomson Reuters Foundation.

“Don’t look at our numbers and think that it’s not happening,” she said. “People did not know what they were seeing.”

Now, she said, after every training session held by her task force, a law enforcement officer will approach her and say: “You know what? I actually have had trafficking cases in the past and I didn’t recognize it as trafficking.”

Tribal elder Tommy Christian, a member of the Fort Peck tribes’ executive board, blames some of the lack of evidence to Indian problems falling on deaf ears in the white community.

“I think it’s just an attitude of well, we’re all savages and it’s just another dead Indian,” he said.

Twenty-five years after her half-brother was sent to prison, Tami Adams-Martens, 59, a nurse at Poplar Hospital, said she now realizes the case involved trafficking.

Her stepsister had been hooked on crack cocaine and in debt to a dealer but had no money, she said.

A fight broke out, and the dealer was killed by Adams-Martens’s half-brother who stepped in to block the deal, she said. He spend 17 years in prison.

NO NAME FOR IT

Joni Johnson, who helps crime victims on the reservation, works with two young women who have suffered domestic violence, are drug users and who she is certain are trading sex for drugs.

“They don’t realize when they’re doing, but it is human trafficking,” she said.

A more haunting case was some 15 years ago when a sexual assault victim revealed that she was selling her nieces for drugs, she said.

“There just wasn’t a name for it,” she said.

Name or not, the problem stretches far back in time, Clark said.

“We could go back to the day that the settlers came, the day that fur trappers came, those days when colonization hit and demeaned the significance and honor and sacredness of women and children,” she said.